Kurt Weill
Die Dreigroschenoper – A play with music to words by Bertolt Brecht [performed in German, with English titles] 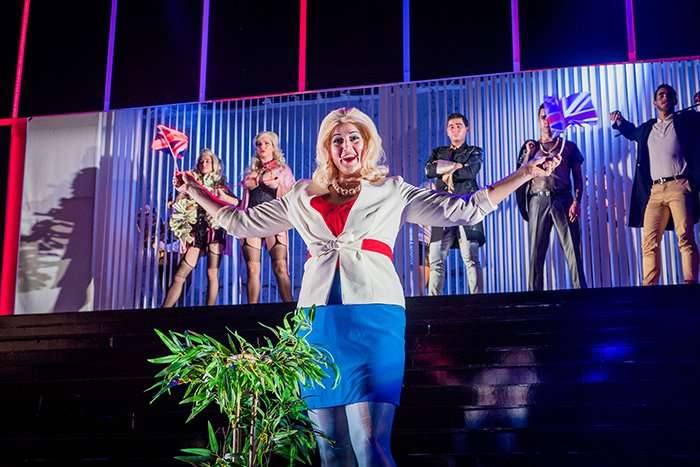 Bertolt Brecht seems to be back in fashion – perhaps not surprisingly given the political situation – but this Royal Academy of Music production of his most-famous collaboration with Kurt Weill follows hard-and-fast on the Donmar Warehouse’s The Resistible Rise of Arturo Ui and the Young Vic’s The Life of Galileo.

I was surprised on arriving at Shoreditch Town Hall that the publicity had it wrong – it wasn’t The Threepenny Opera I had come to review, but Die Dreigroschenoper, in the original German – including all the spoken scenes. My German is frankly not up to much, so I can’t really comment on the accuracy or pronunciation (although I should report that the lady next to me who made little recourse to the surtitles – or rather side-titles – commented that some of the German was not readily comprehendible at all) but, given the international flavour of the RAM Opera School’s students, perhaps German was considered a more logical choice. Of course, the guttural nature of the lingo matches Weill’s punchy rhythms, but with swathes of spoken exposition, I would have thought English would have been much more appropriate, especially as the surtitles indicated a little updating.

That aside, Walter Sutcliffe directs a visually striking production, played out on Dorota Koralczak’s impressive twenty-two-step shiny black staircase leading up to the gallery level where an inner stage can be opened up by lowering the segmented black wall; full marks to a confident cast for negotiating the steps so effortlessly, including both a hatch halfway up to effect sudden disappearances and a properly rehearsed curtain call. Pride of place must go to the fifteen-strong ensemble, conducted by Gareth Hancock. Placed to the left of the stepped stage and all in white shirtsleeves (with Hancock in cocktail-lounge white tuxedo) it is headed by harmonium, piano, banjo and Hawaiian guitar, bravely coping with the rising temperature on one of the hottest days of the year. 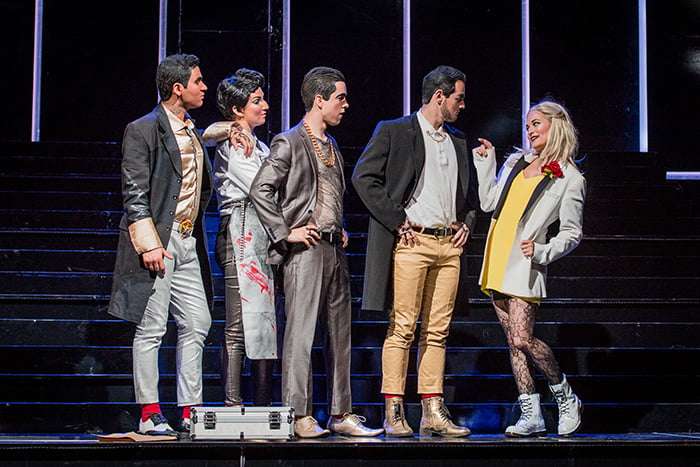 Sutcliffe’s updating is largely carried by the colourful costumes – Robert Garland’s Peachum enters in an eye-popping yellow and purple tracksuit and later dons suits, first all-yellow (with socks to match) and then purple. In a reordering of Weill’s numbers the opening is kept to the end (of which more anon), so we were thrust straight into Peachum’s discovery that errant daughter Polly had spent the night with Macheath. More than that, that they intend to marry even though he is already married to Chief of Police Tiger Brown’s daughter Lucy. Brecht’s take on John Gay’s original is admirably clear in Sutcliffe’s scenarios, even if I constantly had to turn my head to the side to read the translations.

Apart from sneering Robert Garland as Peachum, it’s the women that steal the show. Nika Gorič’s Polly has a commanding soprano and can act as well; no wonder she’s so able to take over Macheath’s henchmen when he disappears, but she has to stand up to Carrie-Ann Williams’s Lucy (sporting allegiance to her father’s profession with figure-hugging shorts with police-chequered trim) and Ilona Revelskaya’s white-latex skirted former-lover Jenny, a highlight being ‘Pirate Jenny’s Song’. Hannah Poulsom makes a fine foil for her Garland as her conniving husband. As for Mikhail Shepelenko as Macheath, he has the debonair looks to attract all the female attention, but little of the danger that might set the seal on the attraction. He has a nice James Bond moment and looks great.

But overall it’s the ambitious production and the collaborative effort of the team that impresses, and the success of holding back the most-famous song, ‘The Ballad of Mack the Knife’ to almost the end, after his reprieve, so as to remind of his true character. It’s cleverly done and worth waiting for.