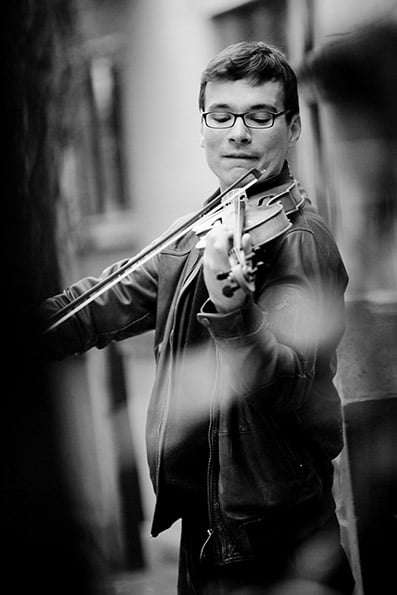 A clear thread running through this programme, with two works by Romanian composers and the soloist also from that country, may have aroused the curiosity of some members of the audience, but on reflection it was perhaps the location of the concert rather than its make-up that may have appeared more unusual for Metropolitan music-lovers, a connection explained by the fact that Călin Humă (born in 1965), composer of the final item, has lived in Hampshire for many years.

Another intriguing aspect was the decidedly unusual programme structure, with two works for violin and orchestra making up the first half, but so far as this listener was concerned, Alexandru Tomescu could have played as many works as he wished, for it was clear, from the opening Baladă by the short-lived Ciprian Porumbesco (1853-1883), and even more so from the relatively more familiar Third Concerto by the long-lived Camille Saint-Saëns (1834-1921) that Tomescu is an artist and virtuoso of the front rank.

Baladă (c.1875) captures completely the then-rising European fashion of nationalism, a haunting slow part followed by a much faster central Allegro before the dreamy opening music returns, a work revealing the folk-based inspiration that surely lies at the heart of this quite touching music. Porumbesco’s death at the age of thirty clearly removed a highly gifted composer, who had studied in Vienna under Bruckner; we may ponder over ‘what-might-have-been’ for the mastery of this most appealing work suggests creative gifts way above the ordinary – especially revealed in such a compelling account as this, Tomescu playing to the manner born with the RPO under the very assured Christopher Petrie, following Tomescu like a cat.

Saint-Saëns’s broadly contemporaneous Third Violin Concerto (1880) is not that often heard in concert as its highly original and patently attractive qualities demand. Cast in the relatively customary three movements, but subtly planned – especially in the remarkable Finale – this superbly constructed and immediately impacting score received a quite tremendous account. Tomescu’s golden-toned Stradivarius was ideal, enhanced by the cathedral’s rich acoustics, and in this regard the balance Petri achieved between the RPO and their hugely impressive soloist was excellent. An encore was demanded: the ‘Praeludium’ from Bach’s E-major Partita.

Călin Humă forty-minute Symphony No.2 was given in an orchestration (including organ) by the conductor, who has previously performed, and recently recorded, Humă’s First Symphony and Piano Concerto. The setting for this premiere was perfect, for the character and nature of this singular composition arises essentially from a creative mind that is more fully contemplative than urgent; not for Humă the manic bustling of aspects of modern life, as the listener is, from the spacious opening pages, drawn into a creative world by a genuine musical craftsman, inspired by the eternal verities of human existence than any temporary fashion.

Humă’s Second Symphony speaks to the listener in language never forbidding or difficult to grasp – structurally, there are aspects of an almost Brucknerian breadth, a definitive strength of total integration and sureness of expression, but this is music that does not hurry the listener or throw the argument with unrelated ideas. The tonal plan of this work deserves mention: although beginning in a somewhat relaxed C-minor, and ending with a powerfully affirmative extended coda in D, one would hesitate to ascribe their juxtaposition as fully organic: this music remains itself. The composer must have been thrilled by the reception.