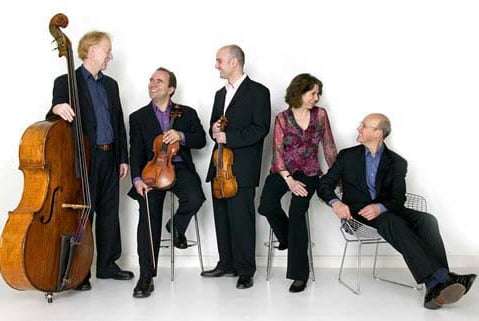 The bad news is that the members of the Schubert Ensemble are well into their final season. The good news is that the musicians are still playing to a very high standard, so they going out on a high tide. This concert was the sixth and last in a series they called “Quintessentials”, in which they subjected a series of Piano Quintets to analysis before playing them. In Part One, lasting some twenty-five minutes, Simon Blendis and William Howard revealed some of the building blocks of two masterpieces, Martinů’s Second Quintet of 1944 and Dvořák’s Second Quintet of 1887. We were then given a break of about ten minutes before they performed both works without an interval.

I was glad that Blendis pointed out how, in what was really his third piano quintet, Martinů seemed to foreshadow the methods of the Minimalists. It was also interesting to have his use of motor rhythms pointed out, but Blendis in particular seemed to be asserting that there were no melodies in the work, while pointing out a passage at the start of the Finale that is almost like chant. No mention was made of Martinů’s most unusual childhood, spent in the single family room at the top of the church tower in Polička – his father, a cobbler, was also the town firewatcher. My visit to the tower, many years ago, was the most moving I have ever made to a composer’s birthplace. This is not the forum for going into too much detail, but it has always seemed to me that, once he had worked through his various phases, Martinů’s mature music teemed with little fragments of chorales which must have reflected the music he heard as a boy, drifting up to him from the church. There was a balcony all round the tower and he could watch the birds almost on an equal footing – small wonder that his music is full of birdsong. I do not find the Quintet unmelodic, in fact I find it extremely melodic while also utterly modern. The analysis of Dvořák’s Quintet, a work most readers will know very well, was also fascinating – it is always salutary to have it pointed out that Dvořák, far from being some sort of provincial Bohemian hick, was a highly skilled and sophisticated composer.

As the players began the performance of the Martinů, I had the bizarre notion that I had preferred the way some of the illustrations had been played. Perhaps the acoustic was partly to blame, but a sort of hell-for-leather hardness appeared to have crept in. I quashed the feeling and in the end thoroughly enjoyed the account; and that devotee of Czech music Patrick Lambert, who was one of my companions for the evening, said he had not felt any reservations. I am not sure how often the Schubert Ensemble members have performed the Martinů – Blendis got a laugh at the start when he mentioned that it was a very difficult work to get together – but I would be glad if they could slot in some more performances during their final season and perhaps record it. I felt that, for all its considerable merits, this rendition did not reach the Ensemble’s potential. Still, I was glad to have the chance to hear this beautiful work. William Howard is a wonderful chamber-music pianist, with a special feeling for Czech rhythms, and he drew some lovely effects from the Steinway while providing a constant impetus for the splendid string players. As you may imagine, I particularly enjoyed the last three movements: the Adagio was involving, the Scherzo sparkled and the tempo variations of the Finale were well handled.

I wrote quite a lot about the Schubert Ensemble’s Dvořák when I reviewed the 2011 recording – with a different second violinist, Alexandra Wood – for Classical Source in 2012. I felt their version of the Quintet was the first non-Czech performance to match the Czech musicians at their own game. I found the same admirable qualities in this live rendering, beginning with the sensitive opening and Jane Salmon’s perfect cello solo. Her intonation is always straightforwardly right – and to be honest, I have heard some very distinguished cellists go flat in this crucial passage. The A-major Quintet also makes demands of the violist and Douglas Paterson showed an effortless ability to step into the limelight and out again. The violin-playing was very well matched and never strident. Through everything ran the superb pianism of Howard, alive to every rhythm and every tempo change. There was genuine excitement in the Poco allegro but it was the sort of excitement that welled up naturally. The transitions to the various tempos in the ‘Dumka’ second movement need especially clever treatment, and the musicians did not disappoint. The Scherzo, a Furiant, was not subjected to analysis in Part One, perhaps because, while contriving some very subtle effects, it has the simplicity of genius. It skipped along merrily in the hands of the Schubert Ensemble and the contrasting Trio was lovely. If a performance of this work has gone well, you are bound to leave the hall humming something from the sonata-rondo Finale to yourself, and so it was on this occasion. It was delightful.

In my review of the Dvořák recording, I covered the discography fairly thoroughly; and I would just like to mention that the current members of the Pavel Haas Quartet, playing at their very best, have recently recorded the Quintet with Boris Giltburg, coupling it with an equally fine performance of the E-flat String Quintet with the Haas’s original violist as guest. The Schubert Ensemble disc, which couples the Piano Quintet with the Second Piano Quartet, remains very competitive. The Martinů has rarely been recorded but there are worthy readings on Naxos and Praga; and if you can find the Supraphon version by the legendary Smetana Quartet with Josef Páleníček, you will find it full of fascinating, even scintillating detail.