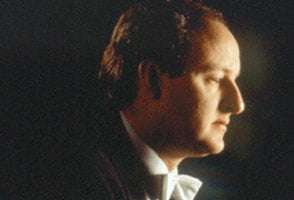 Against the party wall was the shiny black Yamaha. Elsewhere, chairs were grouped around tables, each one sporting a red-check cloth and a small, round tray, home to 4 night-lights. The set-up was a chamber fit for a concert, recalling the ease, intimacy and discretion of Berlin towards the end of the Weimar Republic.

In his usual disarming manner – fluent and friendly, as in conversation amongst friends – James Lisney threw down a gauntlet. He played two unfinished sonatas from the 18-year-old Schubert. Lisney invited us to consider the output and calibre of Beethoven at the same age. In that one year Schubert wrote some 23,500 bars of music. Had he died then, he would have left an output worth investigating for its size alone. Aged 18, Beethoven had not written as much – nor exhibited such mastery of form. Lisney defied us to consider these early sonatas worthless, as others suggest.

All the Lisney trademarks were there in his reading: the velvet touch, the magisterial clarity, the singing melody, the spirit, and persistent rhythmic drive, the graceful switches from one style to another, the Olympian mastery over significant changes of key, and variations in textures of harmony. Here was the young Schubert experimenting with his talent, already pushing steadfastly at the boundaries of his musical experience, looking at the malleability of his thematic material and the possibilities for further development.

The Debussy pieces were similarly delightful. From Estampes, ‘Pagodes’ suggested the China the composer had never visited and ‘Granada’ was redolent of the Spain he scarcely knew. Admiration for Debussy’s ability to conjure up such accurate and evocative sound-impressions of places unknown to him and, also, Lisney for handling the swirling contradictions in Debussy’s writing so skilfully, with such mastery: the resolute vagueness, the long phrases, the telling yet passing detail, the rhythmic strength, the rugged legato, the rubato that never allowed any slackening of forward drive. This was a Debussy whose musical journey made sense and was, ultimately, beautiful yet robust. ‘Clair de lune’ (from Suite bergamasque), shone with the shape of its cool, incandescent clarity.