“Winterreise” is one of those masterpieces so precious that I avoid listening to it often and prepare for each hearing with seriousness and focus. Such works should never become commonplace, indeed I have felt for some years that Schubert’s cycle is given too frequently in London. Access to it needs to be rationed. Newcomers should have to scramble to find it, while those already familiar with it should not be tempted to overdose.

On each of those strictly rationed encounters one hopes for new insights, for stimulation not previously aroused, understanding newly released, with original ideas formulated by performers and expressed in a unique combination of musical and verbal communication. Mark Padmore’s performance with Julius Drake in May 2008 at Wigmore Hall was such an event: it was characterised by strong contrasts, used the full range of the performers’ expressive vocabulary and possessed a coherent structure, in which as the journey proceeded the traveller became gradually and abjectly aware of the hopelessness of his trek.

One can understand from one’s knowledge of the constantly exploring musician that Mark Padmore is that he would not be content just to repeat this interpretation.

A method of achieving freshness in such works both for audiences and performers is to present them in a theatrical context, albeit not one envisioned by the composer. Katie Mitchell has worked with Padmore in a staged version of Bach’s “St Matthew Passion”. Another option is to use a multimedia format for opera proper and Mitchell has her own version of Purcell’s “Dido and Aeneas”. Now she undertakes Schubert’s “Winterreise”. Padmore is clearly at ease working with her and immersed himself wholeheartedly in what was a pretty way-out enterprise (at least fifteen people walked out, some of them very soon after the start).

A simple staging would not have been all that inventive: Ian Bostridge has done it for video. In fact it was not really the visual element that was enhanced (no projections, either still or moving) but the sonic. The main idea seemed to be to augment Schubert’s in-built enactment of the sounds of the traveller’s journey (rushing waters and rustling foliage) with a whole range of sound-effects. Some were external (wind machine, gates opening and closing, a door-latch clanking shut, dogs barking in ‘Im Dorfe’), reminiscent of a radio play. Others seemed to draw us into the traveller’s own experience, so that we shared the perceptions of his own senses: laboured breathing, sobs, and Stephen Dillane’s ever-busy kneading of what appeared to be lumps of leather (shoes crunching through snow, my companion thought). There was also a layer of atmospheric sound, most notably the eerie outcome of a violin bow being drawn across the edge of a bell. In most of this the audience witnessed the sounds being created by the ‘cast’ at their upstage console. These artists were also artisans, makers of music dressed as technicians. The function of some of the props was not easy to discern. 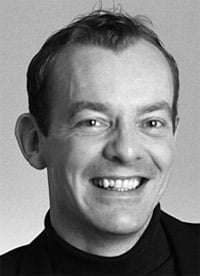 The musical element was much reduced. Schubert’s accompaniment was played on an upright piano, at some distance from the singer and, with the two musicians’ backs turned to each other, there was little sense of the crucial importance of the piano part, nor of Padmore and Andrew West co-operation in a musical sense. Padmore stripped his interpretation of the scalding intensity he had offered at Wigmore Hall. There was much use of euphonious head voice but the amplification of some if not all his part meant that he was tempted to croon at times, thereby sentimentalising the music.

This was an abridged version of the musical text. The writing was on the wall as early as the second song. Padmore spoke the text of ‘Die Wetterfahne’ with little of the frenzy of Schubert’s voice and piano setting. Elsewhere we had the falling intervals with which ‘Irrlicht’ begins delivered as electronic sound before handing over to the piano for the staccato triplets that depict the wraith-like vision in the distance. Only one verse of ‘Frühlingstraum’ was vouchsafed and the penultimate song ‘Die Nebensonnen’ was sung unaccompanied. The one extension of Schubert’s ideas came at the very end, where Padmore took to a second upright piano to deliver ‘Der Leiermann’, then remained there to constantly repeat the characteristic open fifths of that final song as Dillane read Beckett’s “One evening”, the poignant account of a body discovered in a wild-flower meadow. Otherwise the additions could be irritating rather than illuminating, with preludes obscured by sound effects and on one occasion the overlapping of texts between singer and actor.

I should be referring to the text in English, as a crucial part of the enterprise was the new singing translation by Michael Symmons Roberts. This had a strong sense of narrative (‘Im Dorfe’/’In The Village’ put into temporal context with an added clause) and did not hide the relative crudity of Müller’s verse with rhymes and near-rhymes. Sometimes it militated against cantabile singing, with vowels clipped short: how different, for example, is the German diphthong “träumte” from the English “dreamt”. Padmore would often contribute to this by robbing masculine line endings of their full length. The overall effect was to demystify the poetry.

No lack of mystery in the writings of Samuel Beckett, delivered eloquently by Dillane. The affinity that Beckett felt for Schubert is well-known and was documented in the programme by Mitchell. Linking the two was sometimes awkward: the sound of waves breaking fitted the Beckett poem “Roundelay” but not the Schubert/Müller narrative as it drew to an end. Elsewhere loneliness and frustration were drawn into parallel by the choice and positioning of the poetic extracts.

The event will be associated with Mitchell but she did not appear for a curtain-call and in truth little direction was evident. The performers sought and obtained their props, often in haste, activated them and disposed of them. Blocking seemed left to them but doubtless derived from intensive rehearsal. Assistant stage managers and a deputy stage manager were listed but surely they acted only as facilitators for an improvised, evanescent, spur-of-the-moment event. It was first heard at Snape and goes next to New York’s Lincoln Center. I would expect it to be different at each venue.

Padmore, in his contribution to the programme, turned the modern concern for the integrity of the original text on its head. This project seeks to “loosen that sense of duty to the past and engage in an imaginative conversation between the worlds of Schubert and Beckett”. To whom would this treatment make most appeal, I wondered, those to whom Schubert’s work is already familiar but needs freshening up or those whose first port of call is Beckett and who may be led through the great poet and dramatist to the composer whose affinities with him are here exposed.