Song of the Earth

Scottish Ballet are most welcome to London – it is good to see this young and vibrant company which, despite comprising only 34 dancers, is not afraid to tackle large-scale and demanding works. Scottish Ballet repeated their Edinburgh Festival programme: Jorma Elo’s Kings 2 Ends and Kenneth MacMillan’s mighty Song of the Earth. It makes for an odd coupling – Elo’s fluent, fluid movement style which carries little, if any, meaning and MacMillan’s intense and spiritual reaction to Mahler’s great score. 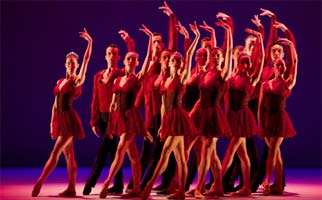 Elo is a fluent choreographer, and in Kings 2 Ends, he offers a lightweight visualisation of the combination of Steve Reich’s Double Sextet and Mozart’s Violin Concerto No.1 in B flat. Fourteen dancers skitter hither and thither to both composers, but Elo falls into the age-old trap of not really knowing what to do with Mozart – instead of looking deeper, he goes for the lighter option, introducing silly walks, shimmies, even the dread continental mime as a reaction to the music. It does not stand comparison, and merely comes across as trite. Justine Watts as violin soloist played with brio and sensitivity, coaxing a taught and snappy sound from her instrument and was in perfect keeping with Richard Honner’s lively conducting of The Royal Philharmonic Concert Orchestra. To the Reich, however, the soberly-leotarded dancers seem more in tune, their comings and goings a more successful visualisation of the (pre-recorded) music and Elo’s characteristic hand and arm gestures in keeping with its tone. The dancers of the company are a generally young lot, clearly eager and enthusiastic, and certainly relish the challenges of choreography made on them. There is a distinct lack of technical precision in many, though, and a lack of uniformity in size and build, particularly among the men. Eve Mutso opened the work with a fascinating solo to silence – she cuts an impressive silhouette and has the ability to convince us that she is inhabiting her own world, which we can only observe. The stage looked stunning in Jordan Tuinman’s blocks of light, sections of pink, blue, yellow or lilac, a scrim either down or half-lifted, allowing for delightful visual effect and an impressive stage picture. Elo’s decision to use two differing pieces of music, to costume the dancers differently for each and to change his dance vocabulary somewhat merely served to underline the fact that these were, in fact, two separate pieces, tacked somewhat unsuccessfully together. 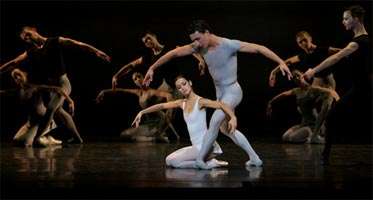 It was a bold decision indeed for Ashley Page, the company’s outgoing Artistic Director, to acquire MacMillan’s monumental Song of the Earth. He rightly has always sought to stretch his dancers, and it was a delight to see this company seize the opportunity to perform a masterpiece of twentieth century ballet. If the dancers were not always entirely in idiom, it is not surprising, given that, unlike for The Royal Ballet, MacMillan’s style and quirks are essentially alien to them. As a performance, the first night grew and grew, the performers sucked, as was the audience, into the choreographer’s extraordinary world. The corps de ballet was well drilled, although the disparity evident in the men in the first ballet was all the more apparent in the second, with some differing interpretations of basic ballet pose and movement – Remi Andreoni in the corps caught the eye with his commendable neatness and idiomatic style. The work stands or falls on its three main dancers as the Woman, The Man and, in English, the Messenger of Death, which is better termed in German as der Ewige – the Eternal One, a benevolent presence who is with us all. Sophie Martin worked hard to master the complicated footwork and pose demanded of The Woman, and clearly dug deep to attempt to convey the primal emotions of love, despair and grief. It was a sterling performance which nevertheless lacked the last ounce of transcendental poetry the greatest interpreters have brought. Christopher Harrison was an impassive and implacable Messenger, using his slim line and pointed feet to good effect in this cool role – he stalks the other dancers on the stage, finally taking The Man from his beloved, and Davidson was adept at conveying the aura of inevitability which surrounds his character. Erik Cavallari is a highly characterful dancer who, as The Man, brought much humanity to the role. He strove to execute MacMillan’s punishing choreography with distinction and truthfulness and was a superb partner to Martin. The work looked striking in Georgiadis’s moody back cloth and simple costumes. Heartfelt thanks to the orchestra’s engaged and moving performance of Malher’s music, and to Karen Cargill particularly for bringing such generous warmth of tone and musical sensitivity to the mezzo part. Perfect this Song of the Earth was not, but a salute the company for their heartfelt performance, and Ashley Page for giving his dancers the opportunity to perform this great work.