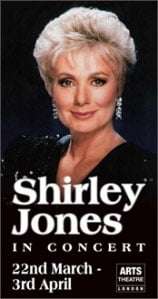 Shirley Jones will be remembered for many things, not least for her appearances in the movie versions of Rodgers & Hammerstein’s “Oklahoma!” and “Carousel”, and for her performance in the film of Sinclair Lewis’s “Elmer Gantry”, opposite Burt Lancaster. However, for many television viewers in the 1970s she will be indelibly associated with “The Partridge Family” in which she played the matriarchal Shirley Partridge opposite her real-life stepson David Cassidy for four seasons over 96 episodes. Since then she seems rarely to have stopped working in other television shows, more films, and a return to stage-work in such shows as “On a Clear Day You Can See Forever”, “Show Boat”, “The Sound of Music”, “The King and I”, and “42nd Street”. During her two-week appearance in London with her son Patrick she will celebrate her seventy-sixth birthday.

Shirley Jones has been a singer all her life, beginning as a child chorister aged six , the youngest member of her church choir in Charleroi, Pennsylvania. Later on, winning the title of Miss Pittsburgh in a beauty pageant led to her competing for the title of Miss Pennsylvania. Her runner-up prize was a scholarship to the Pittsburgh Playhouse where she learned the craft of acting in the likes of Shakespeare and Chekhov. Borrowing some money from her father, she decided to pursue her acting career in New York, promising to return home when the money ran out. Her first audition was all she needed. When she eventually got to sing at the audition, after fifty other girls had sung, a figure approached out of the gloom of the St James Theatre. It was Richard Rodgers and he asked her to stay until Mr Hammerstein arrived. She sang for them both and was immediately hired and landed a job in the chorus of “South Pacific”. Eventually she was put under personal contract to Rodgers & Hammerstein, the only performer ever to enjoy that privilege.

After a stint as one of the nurses in “South Pacific”, she appeared in a small role in Rodgers and Hammerstein’s “Me and Juliet” (1953), a show that also included Shirley MacLaine in its cast. Shirley Jones was on tour when she was called to Hollywood for a screen test for the film of “Oklahoma!” She got the job as Laurey, the rest is cinema history and she went on to do the films of “Carousel” and Meredith Willson’s “The Music Man”, always playing the nice girl next door type, which continued in other films with Glenn Ford, Brando and Niven, Lloyd Bridges, James Stewart, James Cagney, Richard Widmark and Pat Boone. It wasn’t until Burt Lancaster saw Shirley playing a drunkard woman in a television play that he called her for “Elmer Gantry”. Director Richard Brooks didn’t want her for the role of the prostitute Lulu Bains but, as his co-producer Lancaster insisted, the director had to eat his words after the first day of shooting. And both she and Lancaster went on to win Academy Awards for their performances. 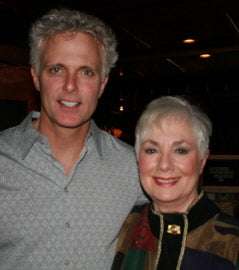 All of Shirley’s family work in some aspect of show business. The three sons she had with actor Jack Cassidy, Shaun, Patrick and Ryan, have all worked in the music and film business. Her stepson, David Cassidy, from Jack Cassidy’s first marriage to Evelyn Ward, had the highest profile as a pop singer in the 1970s and still works as a singer and actor. After some early troubles, the Jones-Cassidy family seem to have settled down to a fairly contented lifestyle with Shirley’s longtime second husband Marty Ingels.

Shirley Jones’s concert opens with a showreel of many of the lady’s greatest hits on film, on television and in the theatre, and it seems to have been an exceptionally busy life. Son Patrick, who is well-established as an actor and singer in his own right, explains what it’s like being in a show biz family and then introduces his mother. Now grey-haired but still slim and petite, Shirley Jones is a glamorous reminder of the heydays of Hollywood, when, as she explains, everybody worked for the good of the film and each other and not, as today, for five minutes of media fame standing on a red carpet at a movie premiere. She tells her story very well, the highs and the lows, interspersed with some wry comments and well-timed gags that offer an immense rapport with her audience.

Her career notes are illustrated with musical ones, beginning with ‘Tonight’ from “West Side Story” before venturing into the world of Rodgers & Hammerstein with ‘If I Loved You’ from “Carousel” and ‘I’m in Love with a Wonderful Guy’ from “South Pacific”. Shirley admits that she doesn’t sing the songs as she used to – the higher notes are a bit of a stretch now – but she can still convey genuine warmth to her audience when she essays these classic numbers. When Patrick returns it’s a question of ‘There’s No Business Like Show Business’ and for the Cassidy family that’s obviously true. After ‘Danny Boy’ he compares his looks with his own father, Jack, and sings a song from one of Dad’s old shows, Jule Styne and Comden & Green’s “Fade In – Fade Out” called ‘My Face Is My Fortune’. Just to keep the party polite he has a paean of praise for Mom too, in ‘Mama, a Rainbow’, from “Minnie’s Boys”, the show about the mother of the Marx Brothers. It sounds sentimental but Cassidy gets away with it, with charm and a witty turn of phrase.

When Shirley returns it’s for a medley of songs from “Oklahoma!”, her first film and one that delivered such iconic numbers as ‘Oh What a Beautiful Mornin’’, ‘People Will Say We’re In Love’ and ‘Out of My Dreams’. Imagine going to the first night of a musical now and hearing songs of that calibre. You can imagine it but it won’t happen again, unless Stephen Sondheim can pull something out of the hat. There is a connection with Sondheim here and Shirley sings what she thinks is his best song (SS thinks otherwise), ‘Send in the Clowns’ which never fails to move. Always ready to cast performers in other roles, I wonder if Shirley Jones could now play Madame Armfeldt in Sondheim’s “A Little Night Music”. If Angela Lansbury leaves the current Broadway production, there could be a replacement waiting in the wings.

Another of Shirley Jones’s movie musical successes, “The Music Man”, means quite a lot to Patrick Cassidy too – he was conceived during the making of the film, a fact that had to be kept from the producer. As a tribute Shirley sings ‘Till There Was You’ and Patrick does what he considers to be the first-ever rap number, ‘(Ya Got) Trouble’ – right here in River City – remember it? The show also includes ‘As Time Goes By’, ‘You Made Me Love You’ and, of course, from “Carousel” ‘You’ll Never Walk Alone’, the anthemic love song to end all love songs.

Ron Abel provides some excellent musical accompaniment and arrangements – his solo piano work on ‘Send In the Clowns’ is sublime – and his band of British jazzers, Toby Cruse on keyboards, Harold Fisher on drums and Dave Olney on bass prove yet again that UK musicians are some of the best in the world. This is a delightful trip down memory lane for those who still wish to be reminded of happier (musical) days.