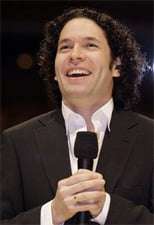 The Simón Bolívar Youth Orchestra of Venezuela and its conductor Gustavo Dudamel arrived in New York preceded by an immense publicity blitz, the “hot property” in today’s classical music business. It is indeed a very unusual ensemble, the flagship orchestra of Venezuela’s el sistema, the state-sponsored program providing free music instruction to hundreds of thousands of children. For the second of their two concerts a program had been chosen which presented plenty of technical challenges; this was exacerbated by the fact that the orchestra uses an extremely large string section (54 violins!), and doubled wind and brass, cramming almost 200 young players onto the Perelman Stage of Stern Auditorium.

Dudamel conducted the Bartók from memory and displayed confidence, technical competence and enthusiasm for the music. At the big climaxes he hurtled himself around like Bernstein, but with oddly disjointed, jerky movements. Everything was in place in this performance, every beat, every cue given, every marking observed, and the orchestra played extremely well. However, what was sorely missing was a sense of phrasing, of line, of forward momentum, of character. Where was the biting sarcasm of the Shostakovich quote, the playfulness of the second movement, or the lyricism of the third? Dudamel did best in the faster, energetic sections, but even then hardly ever managed to transcend the bar-line. The performance remained static, a well-played exercise, but ultimately unengaging.

With Sir Simon Rattle conducting, it immediately sounded as if the orchestra had been changed as well. To paraphrase Mahler, “pianissimo at last”, and it was not only much softer playing than had been heard before, but there were also many different shadings, evoking various moods and atmospheres. Whereas in the Bartók one could admire the virtuosity of a well-trained youth orchestra, Rattle unlocked its true potential and at times made it sound like a world-class ensemble. Now there was depth to the sound, a sheen to the strings, and the climaxes were earth-shattering.

Rattle achieved this widely expanded range of dynamics and expression by extreme economy of means, sometimes barely moving. Instead of trying to beat the sound into the orchestra, to impose it from above, he coaxed it from players, drew it out, and spun it into long lines and phrases. There was a concentrated power to the big outbursts as well, without excessive choreography, which often dissipates rather than enhances the effect of such moments.

Shostakovich 10 has been in Rattle’s repertoire for a long time, and he obviously has a deep affinity for it. Also conducting from memory, he was sensitively and lovingly shaping the lyrical sections, and bringing out all the excitement of the second and the fourth movements, the latter featuring exquisite woodwind solos in the introduction.

As an encore, ‘Mambo’ from Bernstein’s “West Side Story” was played with the exuberance only such a youthful group is capable of. The orchestra should consider itself extremely fortunate to work with someone of Simon Rattle’s stature and experience; Claudio Abbado has also travelled to Caracas. As talented as Gustavo Dudamel is, there simply is no substitute for experience and maturity. Daniel Barenboim once remarked that there couldn’t be any conducting ‘wunderkind’ for precisely those reasons, even though he himself grew up amongst the major artists of the post-war era, was a very precocious pianist, and started conducting at age 13. Most young conductors are allowed time to hone their craft, gather experience, absorb style and mature artistically as well as personally before they reach a position to be judged against their major colleagues of the past and present. Dudamel has been thrown into the spotlight at a very young age, and we can only hope that in spite of this he will be able to nurture his considerable talent and bring it to full fruition.