Sinfonia Tamesa comprises trained musicians who continue to play in ensembles while pursuing other careers. Their regular conductor, Jason Lai, being indisposed, Tom Hammond stepped in. The orchestra’s rapturous acclaim for him was visible testimony to their esteem for his contribution.

I have heard many stodgy performances of Brahms’s Academic Festival Overture. This one was a delight. The opening was light and springy, with invigorating bounce from the violins and cellos. A vigorous body of students was present. Youths were drinking, merrymaking and singing. For once, the climax – the massed rendition of the “Gaudeamus Igitur” – sounded full-throated, raucous and unashamedly tipsy. During the first performance, the academics at the University of Breslau were “blown away by the cheekiness of the subject matter”. In this performance, I could see why. 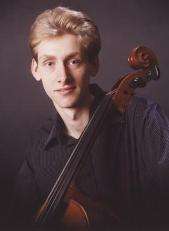 Richard Birchall gave us an intense, highly sensitive presentation of Schumann’s extended elegy for cello and orchestra. Quietly and with self-effacement, Birchall lyrically – indeed, the emphasis was on ‘song’ – explored Schumann’s inner distress in a flow of communing. The occasional moments of repose were a respite – an opportunity to restore inner strength. The orchestral accompaniment to this affecting presentation came over as often broken and hesitant, with woodwind and brass adding economical but telling underlining – and colour – to the tale the cello was telling. The tuttis were full and rounded. The final energy was infectious.

The Beethoven symphony was a feat. Wisely, Tom Hammond gave a straight performance, without quirks and at tempos that allowed the performers to breathe. There was vigour a-plenty, but no sense of rush. Such an approach is essential for a non-professional body of players: the conductor’s beat was steady and clear, holding the performance together calmly and securely. There are dividends too: the inner parts have a chance to make their presence known; pointed and clear; they do not rush past too fast to be noticed or enjoyed.

This performance had an engaging sense of unity: in retrospect, one could sense how the restlessly opening first movement initiated the musical path that led to the unstoppable praise and joy in the finale. Time and again, Hammond and Sinfonia Tamesa wound up tension and built up suspense – and then tumbled into full-blooded release.

This is a fine orchestra – youthful and enthusiastic, with a handful of veterans – playing heartily and capably under a fine conductor.