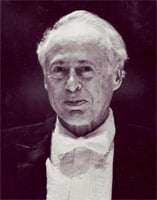 Last year The St. Cecilia Chorus and Orchestra lost its venerable conductor, David Randolph, who was largely responsible for its success during his 45-year tenure. In his memory, St. Cecilia dedicated not only this concert in particular, but also its entire season to Randolph. A knowledgeable, intelligent and personable musician, he gave of himself tirelessly for more than seven decades, not only as a conductor but as an author, lecturer, radio commentator and music educator. His book “This Is Music” has been reprinted numerous times, and he recorded a “Guide to Understanding Music”. During the interval, it was announced that Randolph’s portrait will hang on the walls of Carnegie Hall next to the other musicians who performed there.

In Randolph’s honor, St. Cecilia chose three works that relate on a personal level to its late maestro. First on the program was Morten Lauridsen’s heavenly “Lux Aeterna”, five settings of sacred texts. Written in 1997, it shows the composer’s penchant for plainchant, as well as the influence of Renaissance composers (such as Josquin, Palestrina and Gesualdo) and French impressionists (Debussy and Ravel) and post-impressionists (Duruflé). The mood is set in the opening ‘Introitus’, a motet of solemn serenity occasionally becoming impassioned in fervent prayer. The choral writing is mostly linear with occasional touches of dissonant passing notes that give the music a yearning quality. A more polyphonic texture prevails for the ‘Te Deum’ hymn that follows. An a cappella opening with ‘Laudes’ hymn (‘O nata lux de lumine’) that gives way without pause to the strophic ‘Pentacost’ hymn (‘Veni Sancte Spiritus’) sung with the enthusiasm of a triumphant declamation. The final ‘Agnus Dei’ recalls Vaughan Williams’s arrangements of English hymnal, but with a distinctively American flavor. Although chorus and orchestra performed admirably, there seemed some caution under guest-conductor, Mark Shapiro, save in the ‘Te Deum’ which gave some measure of the fervency the music demands.

Surprisingly, the string-players seemed rather disengaged from their former conductor’s Andante for Strings, its haunting lines perhaps influenced by Sibelius. A long-lined melody is first stated softly by the cellos and then developed by violins and violas in succession, giving way to a subsidiary theme set to a rocking rhythm. The atmosphere is warm yet emotionally dispassionate for the most part, only becoming more-intense before the close on a brief marching tune.

Mozart’s “Requiem” was disappointing. An uneven vocal quartet featured a fine pair of female soloists, a relatively weak tenor, and a bass who was suffering from a cold and thus had understandable difficulty in projecting. Most disconcerting was the lack of virtually any sense of involvement on the part of the chorus even during the more powerful sections. Too often the performance bordered on the routine, jockeying between moderate levels of loud and soft. Only during the ‘Dies Irae’ did some element of dramatic import break through the overhanging clouds. Despite his efforts, Shapiro, an experienced choral conductor, was unable to elicit from the St. Cecilia forces anything more than a bland tribute to David Randolph. That may be telling evidence of how much he is already missed.