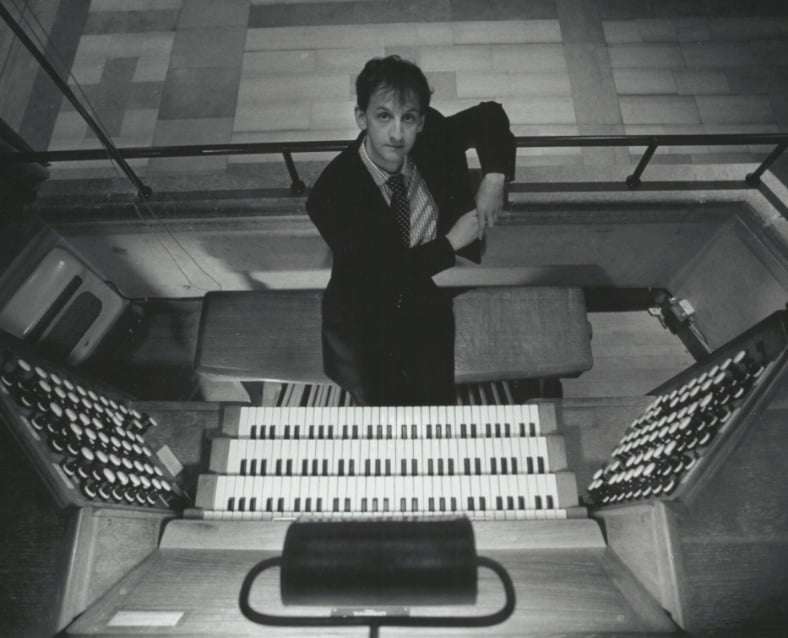 I once visited the cathedral in Ortigia, in Sicily, and was very moved by the sight of a Baroque church incorporating the columns of a Greek temple built a long time before the birth of Christ. It is this accretion of layers spiritual, temporal and artistic – of the new built on ancient certainties – that has inspired Judith Bingham’s Roman Conversions. Her examples are all in Rome – the church of San Clemente built on a Mithraic temple; Bernini’s extraordinary statue in the Villa Borghese of Daphne being transformed into a laurel tree; statues of classical gods in the Pantheon replaced by Christian figures; and Shelley’s son William, buried in the Protestant Cemetery, pushing up the daisies, as it were, which seed themselves and flourish. Her theme is resurrection and renewal, and it linked all three works in Stephen Farr’s recital.

Farr, a brilliant organist and a champion of Bingham’s music, is the ideal performer to realise her powerfully conceived intimations of immortality. There is a strong plainchant element that flows through the ‘theme and variations’ format, and Farr sounded completely at home with the subtle convolutions of Bingham’s musical imagery – her tendril-like growth of sound for the Daphne section is just one instance of how imaginative, grounded and apposite her music is.

Jehan Alain was killed in 1940 aged 29, after an act of stupendous wartime bravery, by German soldiers, leaving a catalogue of music of great originality. He was a contemporary of Messiaen, but his organ music is not saturated in visionary Catholicism to the same degree – which is just as well; there is only room for one Messiaen. Farr played Alain’s Trois Danses more as a symphony than a suite of contrasting pieces, most effectively in the transformation of the central funeral march ‘Deuils’ (Mourning) into the concluding ‘Luttes’ (Struggles) between life and death. Farr performed as though his existence depended on it, with the same sort of directness and engagement that made the Bingham so memorable, and with some sensational registrations that showed off the Royal Festival Hall organ’s range and stereophonic effects magnificently. After something of this calibre, you couldn’t help lamenting what Alain might have gone on to achieve.

It takes me much longer these days to be persuaded to surrender to Messiaen’s cosmic Catholic canvases – his style may be instantly recognisable but can also sound formulaic. The first part in his seven-movement Les corps glorieux – a long plainsong/Indian monody – is typically uncompromising, but Farr’s account, backed up by some finely judged timbres, gradually rendered resistance futile. There are moments in ‘L’ange aux parfums’ that are sheer genius, and the climax of ‘Combat de la mort et de la vie’ is one of music’s great black holes. The muscularity Farr added to the fanfares in ‘Joie et clarté des corps glorieux’ made the music particularly visceral, and his rapt playing of Messiaen’s meditation on the mystery of the Holy Trinity renewed my faith in this most singular composer.