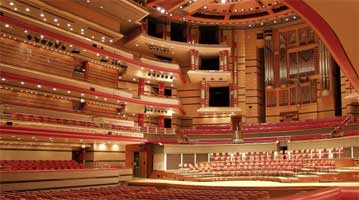 In acoustic terms, the opening of Birmingham’s Symphony Hall marked a very significant achievement. It was 1991, the same year as the curtain rose on the World Wide Web – without which where would we be? – and the phenomenal clarity and warmth of the auditorium’s sound was immediately recognised as having a very special quality. This concert celebrating the Hall’s 21st-anniversary was also a celebration of an exceptional acoustic.

The City of Birmingham Symphony Orchestra and its then music director Simon Rattle played a major role in establishing the parameters of what Symphony Hall needed to be acoustically and so it was fitting that it was the CBSO giving this concert. Under Andris Nelsons the Overture to Glinka’s Ruslan and Ludmilla fizzed along, proving an ideal vehicle to display the clear definition of instrumental colour as well as the wonderful bloom of the CBSO in full sail.

When Symphony Hall opened, Simon Halsey had been Director of the City of Birmingham Symphony Chorus for four years, though his still-boyish looks make it hard to credit his chalking up a quarter of a century with the chorus. Appropriately it was Halsey who conducted Elgar’s The Music Makers, written for Birmingham’s Triennial festival, its premiere conducted by the composer one-hundred years ago. It is the dreamy aura of the opening which sets the tone for the whole. The CBSO Chorus – with its characteristic combination of tight discipline and gorgeous sound – captured it beautifully. The volume that bursts out in the second verse – chorus and percussion united in splendour – was in huge contrast, suggesting that Elgar chose Arthur O’Shaughnessy’s words to afford these great surges of emotion. The composer’s self-referencing, with ‘Nimrod’ from Enigma Variations as well as phrases from the Violin Concerto, are further indication that the work had in Elgar’s affections.

Christine Rice seems always to be an instinctive singer of Elgar, finding a judicious balance between moments where the word-painting dictates the nature of tonal delivery and those where the rich mezzo hue becomes another of the instrumental colours so savoured by Elgar. She was able to soar gloriously, blazing away at the words “wrought flame”, but it was in the contemplative ending that she was at her most expressive. That Halsey is an inspiration to his choristers was always apparent and, even if there were times when the music’s energy sagged somewhat (and when the effect of the piece was distinctly Town Hall rather than Symphony Hall), the performance certainly evoked the sense of history the occasion demanded.

It fell to Bryn Terfel to reach out to the audience of today and create the party atmosphere. His sequence of arias and songs were unashamedly easier listening, but Terfel does nothing by halves, living and communicating every word. Nelsons had returned to the podium, Terfel relishing being able to work with someone sympathetic and adventurous. So Terfel could thunder and whisper and be matched in timing and humour, mischievously milking things. Terfel’s gift for conveying words to maximum effect was evident in the Donizetti. Dulcamara was the role with which Sir Geraint Evans bade farewell to Covent Garden in 1984, but he lived to enjoy the burgeoning of Terfel’s career, so this aria had an element of tribute too. Terfel is a master of comedy – as Evans was – and here every gesture was expertly pinpointed: physically, vocally and sometimes outrageously. In the ‘Te Deum’ Terfel’s Scarpia was a chilling picture of evil and lasciviousness.

The Ravel was the outstanding performance. Nelsons realised everything that is sensuous and lushly expansive in the score, while bringing an exquisite poise to the subtleties of Ravel’s orchestral palette and a lilting insouciance to the dance elements. The CBSO came into its own. Conductors and soloists were presented with bouquets, so metaphorical ones now to the flute section: to Marie-Christine Zupancic for her stunning solo, Andrew Lane for his piccolo playing, CBSO stalwart Colin Lilley for his alto flute solo, and not forgetting Elizabeth May. That their lines emerged with such vibrancy should also be a tribute to that Symphony Hall acoustic.