Fire and Passion of Tango 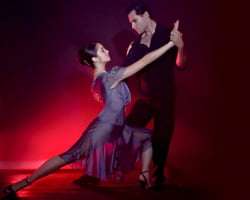 The “tango show” is a theatrical outgrowth of Buenos Aires’s milongas – clubs where patrons gather to dance and enjoy performances by instrumentalists and vocalists of Argentina’s popular and pervasive art form. Tango shows abound in Buenos Aires and have been exported to audiences around the globe by companies such as Tango Buenos Aires, which performed this programme, entitled “Fire and Passion of Tango”, in the Metropolitan Museum of Art’s concert series as it neared the end of a two-and-a-half-month North American tour.

There is a certain generic sameness to such presentations, but each has its own distinctive characteristics. What most distinguished this troupe was its youthful energy and Susana Rojo’s dynamic choreography, in which dancers were often paired outside their regular partnerships. Although the dancing varied somewhat to reflect the changing musical moods, the predominant style combined flashy and intricately intertwined footwork with high leg kicks, acrobatic lifts that conjured up images of figure skaters in pairs competitions, and deep splits to accompany the characteristic two-note cadence that ends virtually every tango. These athletic manoeuvres were facilitated by skirts slit up to the hip.

The excellent five-piece orchestra performed tangos by nineteen composers, most notably Astor Piazzolla; however, Tango Buenos Aires did not include a vocalist to perform the often-poignant and romantic lyrics. The dancers used tables and chairs to simulate a milonga at which they gather, dance and interact in a story that proved to be of less interest than the dances themselves. Cynthia Avila and Demián García, who danced at the beginning to Alfredo Gobbi’s ‘El Andariego’, portrayed the couple at the centre of the rudimentary narrative. After Cynthia pursued Mauricio Celis, he seduced and then abandoned her as they danced to Piazzolla’s ‘Zum’. Demián and the other men avenged Mauricio’s misdeed to Emilio Kauderer’s ‘Todos Sacan’. (This stylised fight scene was far less violent than the portrayals in shows from the milieu of Buenos Aires brothels that played a prominent part in the history of the tango.) Cynthia and Demián were ultimately reunited as they danced to Gobbi’s ‘A Orlando Goñi’.

The other couples were given descriptive labels as they danced in turn. María Luján Leopardi and Esteban Simón as “The Romantic Couple” displayed dazzling footwork, dancing to Oscar Herrero’s ‘Nochero Soy’. Florencia Blanco and Gonzalo Cuello were “The Indifferent Couple” as they tangoed to Francisco Canaro’s ‘El Internado’, ending in spectacularly athletic fashion. Florencia Méndez and Pedro Zamín, “The Comic Couple”, mimed the disastrous potential consequences of misplaced kicks to ‘La Luciérnaga’. Then, Inés Cuesta and Mauricio Celis were “The Passionate Couple”, accompanied by Jacob Gade’s ‘Celos’ (best known as ‘Jalousie’), with virtuosic violin solos by Cesar Rago. Their choreography featured smoothly executed spinning moves, with Inés lifted high above Mauricio’s shoulders just before her dramatic landing as the tango concluded.

In the orchestra’s five instrumental numbers, each of the musicians had numerous opportunities, but it is the bandoneón that best portrays the heart and soul of the tango. Martin Sued’s playing brought the music to life, at times chugging along rhythmically, and at others sighing a melody or playing rapid figures that paralleled the dancers’ fleet footwork. Sued’s unaccompanied playing was particularly outstanding in Piazzolla’s ‘Solo Bandoneón’.