Reviewed: 24 May, 2009
Venue: Pizza on the Park, Knightsbridge, London 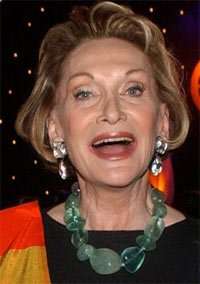 Siân Phillips is a very fine actress who is equally well-known in the theatre, in films and on television. She was memorable as Livia in “I, Claudius”, as Ann Smiley in the television adaptations of John Le Carré with Alec Guinness, as Ursula in “Goodbye Mr Chips”, and in “Nijinsky”, “Clash of the Titans”, “Valmont” and “The Age of Innocence” among many other films. She only came to stage musicals in 1980 when she appeared as Vera Simpson in “Pal Joey” but since then she has made a point of doing much musical work including “Peg”, “Brel”, “A Little Night Music”, “Gigi” and “Marlene”. This last has won her many honours and places her among the best artists currently working in musical theatre. A passionate lover of the musical, Siân is currently doing some Sunday cabaret dates at Pizza on the Park while also appearing in “Calendar Girls” in the West End.

Cabaret work is a very special performance art. It requires guts and the ability to be yourself, which may be the hardest part for an actor. Some cannot bear the thought of being themselves when performing, perhaps because of stage-fright, or a lack of confidence, or because of being shy or thought inarticulate. It’s much easier to hide behind a character. However, it does help to be an actor if you are contemplating a career in cabaret. You have to be able to read and time a line properly – the talk is just as important as the songs. You need to create your own world, inform the spectators about the real you, introduce what you are singing and then do it.

Siân Phillips has worked in every aspect of the business. She started in Wales as a child actress in the theatre and on the radio. She was a presenter on television’s “Land of Song”, so talking out of character is no problem for her. In her show at Pizza on the Park she is very good at the anecdotal stuff about the likes of Noël Coward, Dorothy Parker, Beryl Reid and Marlene Dietrich, telling original stories and seemingly enjoying them too.

Her choice of musical material is impeccable and also highly original. She begins with ‘The nearness of you’ by Hoagy Carmichael and Ned Washington, perhaps a comment on the closeness of her audience just a few feet away. That’s another difficulty about cabaret: there is no hiding place, the performer, metaphorically speaking, is naked. Then it’s straight into some Sondheim and ‘The little things you do together’, from “Company”, a jolly but ironic song about marriage and the damage it can do: “It’s sharing little winks together, drinks together, kinks together, that makes marriage a joy.” From the best of America to the best of Britain and Noël Coward for ‘Most of every day’ and a delicious version of ‘A bar on the Piccola Marina’ where life called to the widowed Mrs Wentworth-Brewster and “fate beckoned her and introduced her / Into a rather queer / Unfamiliar atmosphere.” Phillips acts out the situation and even hilariously wipes away invisible crumbs of Madeira cake served at the funeral wake.

A change of mood comes with ‘Dreaming’, Amanda McBroom’s song about a desperate housewife’s fantasies of who she is, what her father is – “a business man / Got a big old castle in Switzerland”, while her husband, well, “he’s a movie star / Comes home every night in a brand new car”. She also dreams of being taken away from her domestic chores and they are only dreams but, as she says, “it’s not the same as lies”. During cabaret you can change the mood often, so then it’s Flanders & Swann and ‘Madeira, m’dear?’, a cautionary tale of a young woman’s seduction. Siân Phillips’ set also includes Kander & Ebb’s ‘So what?’ from “Cabaret”, ‘The Boy from…’ by Mary Rodgers and Stephen Sondheim, plus more Sondheim in ‘With so little to be sure of’ from “Anyone can whistle” and Sheldon Harnick’s ‘The shape of things’.

Having played Dietrich in Pam Gems’s “Marlene”, Phillips has to sing one of the diva’s greatest hits, Pete Seeger’s ‘Where have all the flowers gone?’ which Dietrich oddly enough made even more her own than the songwriter did. It’s her version we remember. And Siân has a really hilarious story about Dietrich working on the film of “Paris when it sizzles”, which is alone worth the price of admission. Although she doesn’t sing anything from her first musical outing, “Pal Joey”, she does do other Rodgers & Hart numbers, the sublimely regretful ‘He was too good to me’, once made famous by Mabel Mercer and latterly by Barbara Cook, and the more yearningly comic ‘I wish I were in love again’ (remember Judy Garland and Mickey Rooney?).

The show at Pizza on the Park is called “Both sides now”, so Joni Mitchell’s number – of which Judy Collins made a famous recording – is more or less obligatory and Siân does it beautifully. Winding up, she sings ‘Don’t like goodbyes’, from her favourite (if unsuccessful) show “House of Flowers” by Harold Arlen and Truman Capote. Then it’s into Leo Robin and Ralph Ranger’s ‘Thanks for the memory’ and the Gershwins’ ‘Love is here to stay’. A great programme, expertly and charmingly performed in that slightly tremulous way that is Phillips’s signature style – and that’s cabaret par excellence!