Skip to content
LnRiLWNvbnRhaW5lcltkYXRhLXRvb2xzZXQtYmxvY2tzLWNvbnRhaW5lcj0iNmIzNDMzNmNmZTc3NWZiNGJlMTVjMmIwMzU3NWM1MjYiXSB7IHBhZGRpbmc6IDI1cHg7Ym94LXNoYWRvdzogNXB4IDVweCAxMHB4IDAgcmdiYSggMCwgMCwgMCwgMC41ICk7Ym9yZGVyOiAycHggZG90dGVkIHJnYmEoIDEwOSwgMTA4LCAxMDgsIDEgKTsgfSAudGItZmllbGRbZGF0YS10b29sc2V0LWJsb2Nrcy1maWVsZD0iODM3Y2ExZjc0MGRjZDdkOTdlMzQzOWMyYjIwMWZmZTMiXSB7IGJhY2tncm91bmQtY29sb3I6IHJnYmEoIDIzOCwgMjM4LCAyMzgsIDEgKTtwYWRkaW5nLXRvcDogMTBweDtwYWRkaW5nLWJvdHRvbTogMTBweDtwYWRkaW5nLWxlZnQ6IDEwcHg7IH0g
LnRiLWNvbnRhaW5lcltkYXRhLXRvb2xzZXQtYmxvY2tzLWNvbnRhaW5lcj0iNmIzNDMzNmNmZTc3NWZiNGJlMTVjMmIwMzU3NWM1MjYiXSB7IHBhZGRpbmc6IDI1cHg7Ym94LXNoYWRvdzogNXB4IDVweCAxMHB4IDAgcmdiYSggMCwgMCwgMCwgMC41ICk7Ym9yZGVyOiAycHggZG90dGVkIHJnYmEoIDEwOSwgMTA4LCAxMDgsIDEgKTsgfSAudGItZmllbGRbZGF0YS10b29sc2V0LWJsb2Nrcy1maWVsZD0iODM3Y2ExZjc0MGRjZDdkOTdlMzQzOWMyYjIwMWZmZTMiXSB7IGJhY2tncm91bmQtY29sb3I6IHJnYmEoIDIzOCwgMjM4LCAyMzgsIDEgKTtwYWRkaW5nLXRvcDogMTBweDtwYWRkaW5nLWJvdHRvbTogMTBweDtwYWRkaW5nLWxlZnQ6IDEwcHg7IH0g
Verdi
Attila – Opera in three acts to a libretto by Temistocle Solera based on the play Attila, König der Hunnen by Zacharias Werner [Sung in Italian with Met Titles in English, German and Spanish]
LnRiLWNvbnRhaW5lcltkYXRhLXRvb2xzZXQtYmxvY2tzLWNvbnRhaW5lcj0iNmIzNDMzNmNmZTc3NWZiNGJlMTVjMmIwMzU3NWM1MjYiXSB7IHBhZGRpbmc6IDI1cHg7Ym94LXNoYWRvdzogNXB4IDVweCAxMHB4IDAgcmdiYSggMCwgMCwgMCwgMC41ICk7Ym9yZGVyOiAycHggZG90dGVkIHJnYmEoIDEwOSwgMTA4LCAxMDgsIDEgKTsgfSAudGItZmllbGRbZGF0YS10b29sc2V0LWJsb2Nrcy1maWVsZD0iODM3Y2ExZjc0MGRjZDdkOTdlMzQzOWMyYjIwMWZmZTMiXSB7IGJhY2tncm91bmQtY29sb3I6IHJnYmEoIDIzOCwgMjM4LCAyMzgsIDEgKTtwYWRkaW5nLXRvcDogMTBweDtwYWRkaW5nLWJvdHRvbTogMTBweDtwYWRkaW5nLWxlZnQ6IDEwcHg7IH0g

The Orchestra of the Metropolitan Opera
Riccardo Muti 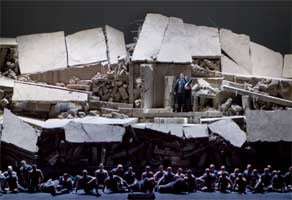 This performance, the second in the Metropolitan Opera’s premiere run of Pierre Audi’s production of “Attila”, was first-rate in every respect. Under Riccardo Muti the Met Orchestra delivered a supple and highly polished account of Verdi’s energetic and passionate score, the impressive cast sang with great urgency and emotion, the Met Chorus sounded splendidly tight and fresh, and the production intensified the music and its dramatic effect.

The Met has previously introduced New York audiences to several of Verdi’s early operas, including “Nabucco”, “I Lombardi” and “Ernani”, but until now the company had never performed “Attila”. The driving force behind the Met’s decision to stage “Attila” was Muti, who is making his own Met debut in this production. According to an interview with Muti by F. Paul Driscoll of “Opera News”, when General Manager Peter Gelb asked the conductor which opera he wanted to do for his Met debut, Muti said, “Not something that has been … done before. Why not ‘Attila’?” 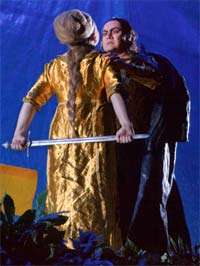 Muti’s choice is not surprising. Verdi is one of the composers with whom he has been most closely associated, and “Attila” was one of the operas he championed during his nineteen-year tenure (1986-2005) as Music Director of La Scala. For this Met production the maestro chose his own cast, all of whom are singers with whom he has worked before. And the creative team led by Pierre Audi is one that met with his approval.

“Attila” is Verdi’s ninth opera and, like “Nabucco” and “I Lombardi”, two of the composer’s earlier successes, features a plot involving a people being faced with oppressive foreign domination, in this case it is the Roman Empire facing off against the barbarian hordes led by Attila the Hun. The opera displays a highly effective musical and dramatic economy as it relates how Attila invades Italy; is confronted at the gates of Rome by the warrior maiden Odabella who has vowed to avenge her father’s murder by the Huns; rejects the Roman general Ezio’s secret proposals to share power with him; marries Odabella who then finally claims her revenge by stabbing him to death.

Audi has come up with a striking production. Architects Jacques Herzog and Pierre de Meuron’s stage designs present the action, which takes place in a variety of mythically resonant locales in Italy, in a highly stylized way. Two visual themes predominate: a ruined city and an untamed forest. In the ‘Prologue’, the demolished city of Acquileia is depicted as a gigantic pile of ruins which rises to reveal a pile of soldiers’ bodies lying prone across the width of the Met’s vast stage. In the acts that follow, huge backdrops of untamed vegetation represent, in turn, Attila’s camp in the environs of Rome, a forest nearby, and in the end, another forest near Ezio’s camp. The action Audi has devised for these settings is clear and effective. The bold, unencumbered staging highlights the interaction of the five main characters and intensifies the effect of Verdi’s score, which in its best moments is stunningly beautiful. 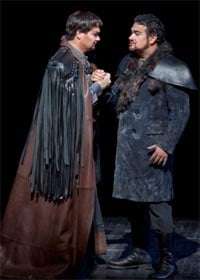 The cast is very strong. As Attila, Ildar Abdrazakov is a vigorous, noble and unexpectedly appealing warrior. His smooth, rich and resonant bass carried extremely well through the whole of the performance. Violeta Urmana is equally impressive in the voice-killer role of Odabella. She handled the pyrotechnical demands of her opening aria and cabaletta with great panache, and had no trouble holding her own in the big ensembles.

Replacing the ill Carlos Alvarez, Giovanni Meoni was a powerful and firmly-voiced Ezio, full of expression and never lacking plenty in vocal firepower. As Foresto, a knight of Acquileia, Ramon Vargas’s essentially lyric voice sometimes seemed out of place in the high-powered ensembles, but his lovely tenor was very affecting in his first act duet with Odabella. Russell Thomas sang the role of Uldino, Attila’s slave, very well. Veteran bass Samuel Ramey, who triumphed in the role of Attila in the 1980s and the early 90s, including a production with Muti at La Scala, was authoritative and characterful in the small but crucial role of the Roman bishop Leone who appears to Attila as an old man in a terrifying dream.

But the biggest star of the evening was undoubtedly Muti. Under his precise and highly informed direction, the orchestra, cast and chorus gave an elegant and stunningly fresh musical performance which brought out all the intensity and musical beauty of Verdi’s vibrant score.