The Orchestra of the Metropolitan Opera
Bernard Labadie 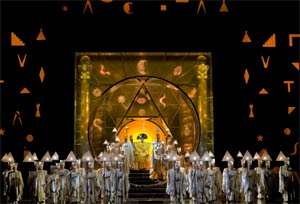 Julie Taymor’s production of Mozart’s “Die Zauberflöte” has been a staple in the Metropolitan Opera’s repertory since it premiered in 2004, delighting audiences with spectacular puppetry and visual effects that add a new layer of fantasy to an already fantastic opera.

In this performance, on the third night of the Metropolitan Opera’s new season, a cast that was almost entirely new to this production infused it with fresh energy and outstanding music-making. French-Canadian conductor Bernard Labadie, in his Metropolitan Opera debut, drew lively and sensitive playing from the Met Orchestra, providing excellent support for the singers without ever overpowering them. Labadie’s experience as a choral conductor also served him well, as he maintained a fine balance among orchestra, chorus and solo vocalists. Although Labadie is best known as an early-music specialist – he is the founder and music director of Les Violons du Roy Québec – and he proved to be excellent in Mozart, too.

There were auspicious Met debuts by two young German singers, tenor Matthias Klink and bass Georg Zeppenfeld. Klink brought a strong yet supple tenor voice to a portrayal of Tamino that engaged the audience’s sympathy from his opening aria, ‘Dies Bildnis ist bezaubernd schön’, in which he declares his love for Pamina, through the many adventures that culminate in them being united in Sarastro’s Temple. Klink’s singing was exemplary in quintets with the Three Ladies and Papageno, as well as in duets with Pamina. Zeppenfeld, as Sarastro, sang with clarity of tone and a bass voice that was solid and hefty in the lowest register. His arias ‘O Isis und Osiris schenket’ and ‘In diesen heil’gen Hallen’ exemplified Sarastro’s dignity and sagacity. Also making her Met debut was mezzo-soprano Jamie Barton, who acquitted herself well as the Second Lady in beautifully sung ensembles with soprano Wendy Bryn Harmer (First Lady) and mezzo-soprano Tamara Mumford (Third Lady). 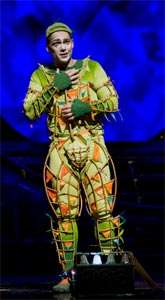 English baritone Christopher Maltman brought both vocal and comedic excellence to his first Met Papageno, capturing the audience from his very first line as he introduced himself in ‘Der Vogelfänger bin ich ja’. Maltman’s flawless sense of comedic timing provoked laughter again and again as his character struggled to attain self-control, philosophised about the simple life, and finally won his heart’s desire –Papagena (Kathleen Kim). He was acrobatic as he interacted with George Tsypin’s sets, and adroit in manipulating Taymor’s puppetry and other visual effects. Maltman provided solid support in quintets with Tamino and the Three Ladies, and his duet with American soprano Susanna Phillips as Pamina, ‘Bei Männern, welche Liebe fühlen’ was among the highlights of the performance. This was also Phillips’s first time singing Pamina at the Met (her debut last season was as Musetta in “La bohème”), and she gave a marvellous performance, expressing perfectly Pamina’s despair at her apparent abandonment by Tamino in the beautifully sung second act aria ‘Ach, ich Fühl’s’, and later, in pointed contrast, her ‘Tamino mein’ conveyed her happiness at their reunion.

Hungarian soprano Erika Miklósa was dazzling as the Queen of the Night, a role she sang in the production’s initial run in 2004. She was a fittingly imperious figure, cowing all around her into submission. On this occasion, the bearers of the wing-like panels that surrounded the queen moved in sync with the music, adding emphasis to her words in ‘Zum Leiden bin ich auserkoren’ in the first act. Miklósa’s second act aria, ‘Der Hölle Rache’, laden with even more high Fs, was, literally, a showstopper.

Greg Fedderly sang well and was hilarious as Monostatos, flashing his bat-like cape and showing off his fleshy midriff as he lusted after the captive Pamina, always falling just short of attaining his goal. The other principals returning to previously sung roles were two veterans of the Met’s abridged English-language version of this production, David Pittsinger as the Speaker and Kathleen Kim as Papagena, both of whom performed ably.

All in all, the combination of fine singing and orchestral playing with Taymor’s delightfully amusing visual effects made this a highly engaging performance.