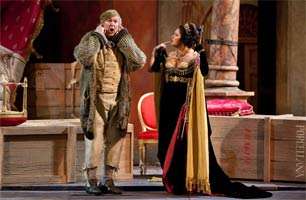 Music director James Levine has added Donizetti’s comic masterpiece “Don Pasquale” to his extensive repertory this season in the Metropolitan Opera’s first revival of Otto Schenk’s production from 2006, with sets and costumes by Rolf Langenfass (who collaborated with Schenk on the recently retired Met “Ring”). Six performances last fall are being followed by five more this February with the same cast.

As Levine conducted the rollicking overture, stretching a phrase here and speeding up there, with the Met orchestra deftly following his every gesture, it was clear that there would be fun aplenty. The spirited quartet of principals were an ideal ensemble, combining excellent bel canto singing with brilliantly timed comedic ‘business’ under the direction of Otto Schenk, who returned to the Met for this revival. Also returning from 2006 were Anna Netrebko and Mariusz Kwiecien. 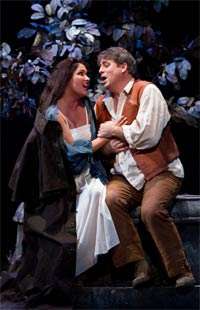 The story of the opera is an elaborate plot to trick Don Pasquale, a wealthy if aging bachelor, into consenting to the marriage of his nephew and heir, Ernesto, to Norina, a young widow. Dr Malatesta, who is Pasquale’s physician and also a close friend of the two lovers, arranges a sham marriage between Pasquale and Norina, who he introduces as his own sister, Sofronia. Once the marriage contract has been signed, ‘Sofronia’ promptly begins spending the Don’s money extravagantly, while denying him even so much as a kiss and making him believe that she has a secret lover. The plotters convince Pasquale that allowing Ernesto to marry Norina and bring her to live in his house would induce the Don’s ‘wife’ to leave him, and so he consents to the marriage. Norina then reveals her true identity, and the forgiving Don withdraws his threat to disinherit Ernesto and blesses his marriage to Norina.

Netrebko was utterly ravishing as Norina. She used her beauty and charm to seduce the gullible Don Pasquale – and the audience as well – and then drove him to distraction with outrageous behaviour. As she introduced her character (‘Quel guardo il cavaliere’) and schemed with Malatesta, she was radiant and acrobatic, both vocally and physically, ending Act One by somersaulting onto her chaise and kicking her legs in the air. She carried off the transformation from shy convent lass to shrew in gradual stages, with perfectly timed gestures that triggered equally comedic responses by John Del Carlo as Don Pasquale. Her top notes sparkled as she bade goodnight to the furious Pasquale, and again in her love duet with Ernesto. 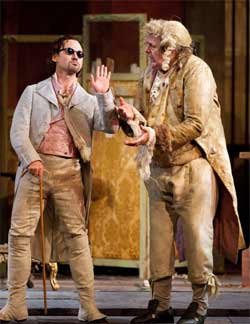 Del Carlo cavorted in the title role, rattling off patter with ease as he portrayed the bumbling victim of the trickery of Malatesta and Norina. His facility is matched by vocal power and richness of tone. Del Carlo’s delivery of Don Pasquale’s constant interjections in counterpoint with the other singers was unerringly laugh-producing, whilst anchoring the music harmonically. His reading of the letter intentionally dropped by Norina in Act Three was especially hilarious, and the ensuing duet with Kwiecien (‘Cheti, cheti, immantinente’), which was encored in front of the scrim, brought the house down.

The character of Dr Malatesta contrasts with most of the others that Mariusz Kwiecien has portrayed at the Met, ranging from lovers to heroic figures and villains. Yet comedy comes naturally to him as he dashed about the stage sporting a white hat, sunglasses and a cane. Kwiecien sang with a strong, dark baritone voice as Malatesta manipulated Don Pasquale, Norina and Ernesto into doing his bidding. His duet with Norina seemed charged with sexual energy although they are clearly friends and not romantically involved, and in his duets with Pasquale his patter was a match for Del Carlo’s.

Ernesto is the opera’s most serious role, both dramatically and vocally, including two notable lyrical arias and a love duet. Matthew Polenzani brought a rich Italianate tenor voice to Ernesto’s lament at what he believed to be the loss of his beloved Norina (‘Cercherò lontana terra’), an aria that has an ironic aspect since the audience realises that his pessimism is misplaced. He was also splendid in his serenade to Norina, beginning offstage to the accompaniment of guitars and the chorus and then continuing beneath her balcony. The pair’s only love-duet does not come until that final scene, but it was worth waiting for. Bernard Finch was amusing in the brief role of the sham notary, as were Don Pasquale’s three unenthusiastic household servants. The servants engaged by ‘Sofronia’ sang well as they demonstrated the havoc wrought by her extravagant spending.

Schenk’s production and stage direction were quite effective. His staging maintained a high energy level, with humorous bits of comedic business constantly interjected, but he also paid due attention to the moments of relief from the otherwise frantic pace – most notably Ernesto’s arias and his duet with Norina. He also brought off with stunning effectiveness the moment in Act Three when Norina strikes Don Pasquale, leading him – after a pregnant silent pause – to declare touchingly, “Ah! È finita, Don Pasquale” (it’s all over for Don Pasquale), and for her to express sympathy for the pain she was inflicting on him.Rolf Langenfass’s delightful set and costume designs and Duane Schuler’s lighting were appropriate to the opera’s cheerful character. A painted scrim depicting a Roman street was used during the Overture and during changes of scenery. Pasquale’s house is grand in scale, as befits its owner’s wealth, but rather run-down owing to the elderly bachelor’s neglect and too-small staff of servants. Norina’s terrace was set amidst the earthen colours and bright sunshine of the Roman cityscape, and the starry, moonlit sky above Don Pasquale’s garden was particularly effective. The costumes, which placed the action in the early-nineteenth-century, were quite attractive. Norina’s costumes were the most notable, the first revealing much of Netrebko’s beautiful figure and her tacky, tasselled evening dress in Act Two reflecting the poor taste of ‘Sofronia’.

Levine and the Met Orchestra were in fine form, with noteworthy solos on cello, bassoon, horn and flute during the overture, and an outstanding trumpet solo depicting the lamenting Ernesto in the entr’acte preceding Act Two. The orchestral accompaniments to the opera’s recitative passages – a Donizetti innovation – maintained an ideal balance with the singers. Levine’s tempos propelled the action forward at a brisk pace, and brought a delicate touch to the opera’s lyrical passages. Although his conducting was energetic, Levine, who is recovering from recent surgery, did not appear for a curtain call, but received the plaudits of the cast and audience from the podium.

Some video’s of the Met’s “Don Pasquale”: