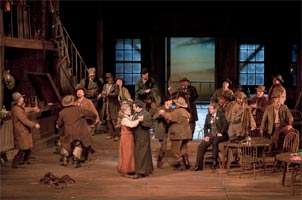 One might expect Puccini’s “La fanciulla del West” to be a perennial favourite with US audiences. It is set in the American West and is based upon an indigenous play that the composer saw on Broadway whilst in New York for the Metropolitan Opera premieres of his “Manon Lescaut” and “Madama Butterfly”. It is, however, seldom performed here, having last been staged at the Met in 1993. Giancarlo del Monaco has now returned to direct a revival of his 1991 production in commemoration of the 100th-anniversary of the world premiere of ‘Fanciulla’ at the Met – in which Emmy Destinn, Enrico Caruso and Pasquale Amato starred and Arturo Toscanini conducted.

Nicola Luisotti, music director of San Francisco Opera, has a long association with ‘Fanciulla’. He brought out the sweeping beauty of Puccini’s score, vivid in its depiction of the windswept Western landscape and the rugged lifestyle of those who inhabit it, and rich with pungent harmonies that proclaim their twentieth-century identity. The Met Orchestra and the large male chorus were in top form. Elisabete Matos, who made her Met debut earlier in the run, was a stylish Minnie, filling in here for the ailing Deborah Voigt. Marcello Giordani as Dick Johnson (a disguise for the bandit Ramerrez) and Lucio Gallo as Sheriff Jack Rance portrayed the rivals for Minnie’s affection. They were joined by a supporting cast that included a large complement of comprimario singers, some with hundreds of Met performances behind them, and others appearing there for the first time. 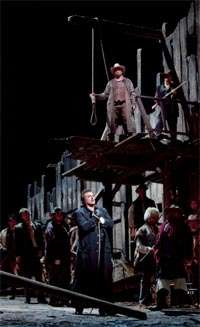 Matos was outstanding vocally as Minnie, singing with power and a thrilling upper register in ‘Laggiù nel Soledad’, in which she told Rance that she would only marry a man whom she truly loved, just as her mother had loved her father. Matos’s voice warmed up further in Act Two, as she sang with increasing tenderness in her love scenes with Giordani. He was in excellent form in a role that suits his voice well. His top notes were solid and he sang with a sweetness of tone that made Minnie’s attraction to Johnson quite credible. He gave an impassioned and moving rendition of ‘Ch’ella mi creda libero e lontano’ in Act Three, the opera’s most notable aria. Gallo was a rather sinister Jack Rance, his solid baritone voice suitably matching the character’s gruff demeanour. His scenes with Matos’s Minnie were filled with sexual tension as she resisted his persistent advances, and his character’s growing bitterness was palpable. 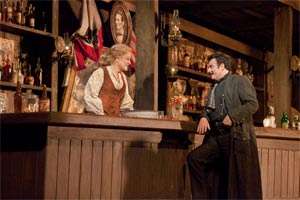 Keith Miller was outstanding as Ashby, the Wells Fargo agent who relentlessly pursues Ramerrez, and Dwayne Croft gave a fine performance as Sonora, whose overwhelming desire to marry Minnie is hopeless, but who ultimately persuades the other miners to allow Ramerrez to go free and leave California with Minnie. Also noteworthy among those in the supporting cast were Oren Gradus as the minstrel Jake Wallace and Tony Stevenson as Nick, the Polka’s bartender. Making their Met debuts in this run were Hugo Vera as Trin and Edward Mout as the Pony Express Rider.

Michael Scott’s sets and costumes paint a rather realistic picture of three locales in the mountains of California at the time of the 1849-50 Gold Rush. Gil Wechsler’s lighting was most effective when moonlight streamed into the “Polka” saloon at the end of Act One and in the dim pre-dawn aura of Act Three.

Act One’s meticulously detailed “Polka” is a huge space, which provided lots of room for action, including a brawl, intricately choreographed by fight director B. H. Barry, that went so far as to have one of the fighters crash through the railing of a balcony above the bar and fall to the stage below – safely caught by other combatants, of course. This cavernous set created some acoustical problems, however, particularly in louder orchestral passages, with singers sometimes having difficulty being heard depending on where they were located on the stage. There was no such problem in Act Two, as the much smaller space of Minnie’s cabin positioned the singers close to the proscenium with a wall behind them to reflect sound. This allowed all of their voices to resonate marvellously, helping to make this act the dramatic and vocal focal point of the opera. Outside the cabin, there were fir trees, distant mountains and an impressive snowstorm, with flakes swirling above and around the cabin. Act Three was set in what appeared to be an abandoned ‘ghost town’ rather than in a forest clearing as the libretto specifies. Although Minnie and Johnson had each entered on horseback in Act Two, there were no horses in the final act, a departure from the stage directions that diminished the dramatic impact of Minnie’s arrival just in time to save Ramerrez’s life.

Deborah Voigt, Minnie in the Met’s 100th-Anniversary production of “La fanciulla del West”, narrates a slideshow of images from the opera:

Some video clips of the Met’s production of “La fanciulla del West”: