Donizetti
L’Elisir d’Amore – Comic opera in two acts to a libretto by Felice Romani, after Scribe’s text for Auber’s Le philtre, in turn after Silvio Malaperta’s Il filtro [Sung in Italian with Met Titles in English by Cori Ellison] 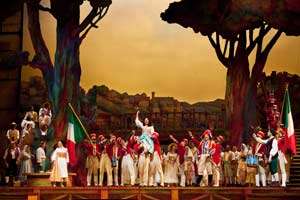 Of the more than 60 operas that Donizetti composed, “L’Elisir d’Amore” (The Elixir of Love), an opera buffa about a lovestruck country bumpkin who wins the heart of the village’s richest and prettiest young woman against seemingly impossible odds – was the most frequently performed in his lifetime. The number of Metropolitan Opera performances–more than 250 since its company premiere in 1904 – testify to the work’s continuing popularity. Now John Copley’s storybook production has returned to the Met repertory for its sixth revival since it was first unveiled in 1991.

Beni Montresor’s sets are as lighthearted as opera’s story. Two dimensional cut-outs – trees, houses, clouds, a church, a vendor’s cart, a mill wheel, even the horses that pull Dr. Dulcamara’s carriage – are all painted in cotton-candy pastels of pink, yellow, green and blue. The deliberately-artificial looking sets, which already looked faded when they first appeared in 1991, have the dual virtue of being charmingly old-fashioned but technically efficient at the same time. They ascend and descend quickly and quietly, never getting in the way of the performers or the music. 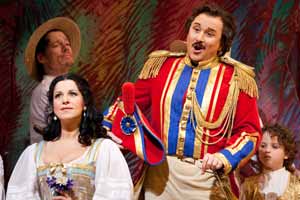 Montresor’s costumes are as fanciful as his sets. The brightly-dressed peasants all look as if they have just stepped out of an illustration in a 19th century book of fairy tales. Sergeant Belcore and his men, dressed in bright red uniforms with oversized helmets, resemble nothing so much as wooden Nutcracker soldiers, as they carry out their slapstick drill routines.

“L’Elisir d’Amore” is not only one of the most lovable of all comic operas, it also contains some of Donizetti’s loveliest melodies, including ‘Una furtiva lagrima’ one the most popular tenor cavatinas in the whole Italian repertory. And in this performance, the music prevailed. Under Maurizio Benini’s briskly-paced conducting, the Met Orchestra played extremely well, delivering a stylish, well-shaped performance, full of vitality and generating an appropriately effervescent spirit. 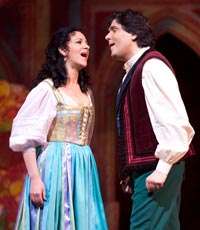 In the role of Nemorino, the impoverished and not-very-bright farmer in love with the wealthy and beautiful Adina, tenor Massimo Giordano was more of a disappointment. Replacing Rolando Villazón who was originally scheduled to sing the role but cancelled his first two performances because of illness, Giordano was less than ideally cast. His singing was smooth enough, but his characterization came across as more desperate than endearing, and was altogether lacking in the necessary ardor to make Adina’s feelings for him totally credible. As the performance went along he warmed up a little, enough to give a respectable rendition of ‘Una furtive lagrima’, but that “Furtive Tear” was not the show-stopper it should have been.

In contrast, Angela Gheorghiu’s sprightly portrayal of Adina, the object Nemorino’s affections, was a joy from beginning to end. Her agile soprano with its bright, gleaming tone is ideally suited to the role, and she invested the character with a wonderfully engaging capriciousness. Always perfectly sure of herself, she gave a musically stylish performance, as she effortlessly negotiated the many coloratura and legato passages. Her vivacious characterization and raven-haired good looks made Nemorino’s infatuation with her completely understandable. Of all the principals, her she was the most impressive.

In the role of Belcore, the lady-killer sergeant and Nemirino’s rival for the affections of Adina, baritone Franco Vassallo sang attractively and was full of swaggering, comic bluster. He was at his best in his scenes with Gheorghiu, most of all in his entry aria ‘Come Paride vezzozo’ (As charming Paris gave the apple), in which he makes his blustering proposals of intimacy.

Baritone Simone Alaimo clearly relished the comedy in the role of Dr. Dulcamara, the quack who sells the naïve Nemorino a phony love potion. Full of exuberant good nature, he displayed marvelous comedic flair in ‘Udite, udite’ (Hear ye, hear ye), the mighty patter song in which he introduces himself to the villagers.

As Gianetta, soprano Ying Huang displayed a supple sound and made the most of her relatively small role. The singing of the Metropolitan chorus also came across very well. But in the end what benefited the evening most was Angela Gheorghiu’s appealing performance as Adina and Maurizio Benini’s masterly conducting of Donizetti’s spirited score.