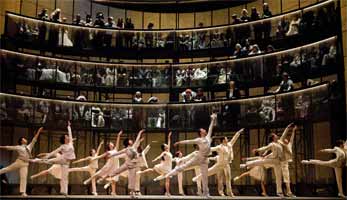 “Orfeo ed Euridice” is a historically important work, Gluck’s reforms setting opera on the path along which it evolved through Mozart and Wagner. Gluck emphasised the importance of drama, replacing highly ornamented da capo arias that dominated earlier operas with singing more directly expressive of human emotions and interactions. He also increased the importance of dance and paved the way toward larger and more diverse orchestral forces. This Metropolitan Opera production, based on Gluck’s original 1762 version of the score, combines lively choreography and scenic design with a dramatically powerful presentation of the Orpheus myth. Its presentation in an uninterrupted 90-minute span makes for a highly satisfying night at the opera. 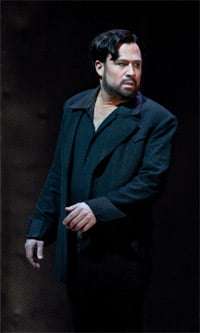 Although the role of Orfeo is usually performed by a mezzo-soprano, countertenor David Daniels sang the role when this production premiered in 2007, and he now returns for its second revival. (Stephanie Blythe was Orfeo in the previous revival in 2009.) Daniels sang beautifully and expressively, and, as the only male to sing the role at the Met, made a more credible Orfeo than any mezzo could. The black-clad Daniels was well up to the considerable dramatic and vocal demands of the role. His grief at Euridice’s funeral and in his lament to the furies and ghosts guarding the gates of Hades contrasted with his expressions of delight at the beauty of Elysium. Orfeo’s despair at the thought of losing Euridice a second time was palpable in Daniels’s stirring rendition of the opera’s best-known aria, ‘Che farò senza Euridice?’ (What will I do without Eurydice?). 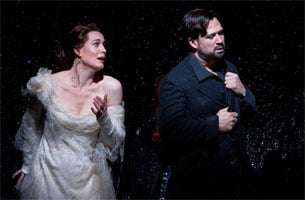 Kate Royal, making her Met debut, sang magnificently and, costumed in a long white gown, made a stunning Euridice. Her pleading with Orfeo in the labyrinth in their duet, ‘Vieni, apagga il tuo consorte’, was heart-rending, and her aria ‘Che fiero momento’, sung in ringing tones, convincingly demonstrated her distress. Lisette Oropesa continues to impress as one of the Met’s finest young sopranos. She was delightfully saucy as Amore, singing with clarity and beauty of tone as she was lowered on wires from high above the stage. Her aria ‘Gli sguardi trattieni’, in which she warns Orfeo that he must not look at Euridice as he leads her out of the land of the dead, was sung with sweetness and charm.

Gluck gave the chorus and dancers a large role, and they are focal points in this production. Neither Mark Morris’s choreography for his troupe (augmented by dancers from the Metropolitan Opera Ballet), nor their rather informal, modern costumes, designed by Isaac Mizrahi, place the opera in any specific period. To further emphasise the timelessness of the Orpheus myth, Mizrahi dresses the chorus to represent ninety historical personalities, ranging from antiquity (Moses, Plato, Julius Caesar and Cleopatra), through centuries of monarchs, world leaders and icons of arts and letters, to the more recently departed John Lennon, Mother Teresa and Diana, Princess of Wales. Mizrahi’s costumes for the chorus are so fascinating as to divert attention from the action of the opera in an irresistible attempt to identify their characters. 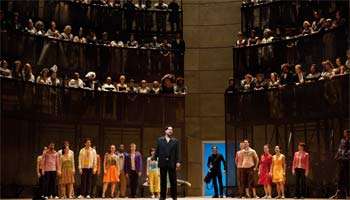 The dancers and the chorus (the latter’s members observing the action from a curved, three-tiered gallery) are unified through coordinated gestures and accents into a single, powerful dramatic force as they initially barred Orfeo at the gates of Hades. The Metropolitan Opera Chorus performed brilliantly, singing with clarity and power. Morris’s entertaining choreography captures the varying moods of the music. His darkly clad dancers consoled Orfeo at Euridice’s funeral and forcefully resisted his attempt to enter the underworld. Then, costumed in white, they gracefully depicted the beauty of the Elysian Fields. Most delightful of all was the joyous suite of dances, performed in brightly coloured costumes, that celebrates Orfeo and Euridice’s return to the upper world and the triumph of love over death.

Allen Moyer’s scenic design makes effective use of simple elements. The triple-tiered chorus gallery can be divided in half and repositioned on the stage, but most of the time it stands in front of a tall semicircular wall, divided into rectangular sections. At the bottom of the gallery are benches on which the dancers and singers are sometimes seated. There are two rather dramatic visual effects. In Act Two, when the furies decide to allow Orfeo to enter Elysium, a six-story-tall metal staircase descends from above the proscenium until its lowest two flights have passed through a trapdoor, then rises bearing Orfeo, who descends two flights to the stage level as the orchestra plays ‘Dance of the Blessed Spirits’ (which, ironically, Morris does not choreograph). The most dramatic and beautiful scenic change takes place at the beginning of Act Three, as Orfeo and Euridice begin their journey out of the underworld. The semicircular wall that served as a backdrop rotates to the front of the stage, forming the labyrinth through which they must pass to reach the upper world. James F. Ingalls’s dramatic lighting brings out glistening highlights on the dark surfaces of the labyrinth. When Amore has again reunited the pair, the wall rotates to its original position and the stage is flooded with light as the celebratory dances commence.

Antony Walker, in his debut engagement at the Met, led the orchestra in a sensitive reading of Gluck’s score. He kept soloists, chorus and orchestra together and in fine balance, allowing details such as the harp and pizzicato strings representing Orfeo’s lute and the woodwinds accompanying Orfeo’s aria, ‘Che puro ciel, che chiaro sol’ in Act Two to come through with clarity, as did the excellent playing by harpsichordist Jonathan Kelly. Especially delightful were the extended orchestral passages accompanying Morris’s dancers.

Some videos from The Metropolitan Opera of “Orfeo ed Euridice”: