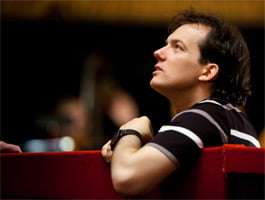 Even after some twenty years, the Metropolitan Opera’s Zeffirelli production of “Turandot” is not likely to be retired any time soon. When the Imperial Place is revealed in Act Two, the huge, extravagant golden sets never fail to elicit applause and instantly transport the audience into a fairytale world of Chinese splendor. The polar opposite of an updated re-interpretation, this staging doesn’t seek to enlighten, but to entertain, to overwhelm the senses with spectacle.

Puccini’s lush and exotic score is perfectly suited for this approach, featuring a large orchestra, impressive choral scenes, and dramatic voices in the major roles. Andris Nelsons pulled out all the stops, although at times one wished he had reined-in his forces to make it easier for the singers to be heard without effort. 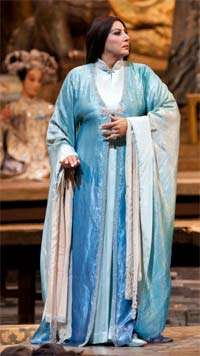 Maria Guleghina, in the title role, has a naturally big, round voice which projects effortlessly; however, on some of her high notes she pushed unnecessarily, turning it shrill and wobbly. On the other hand, her piano singing was exquisite, well modulated and expressive.

Salvatore Licitra was very uneven throughout the evening, often singing sharp, and alternating between pleasant and fairly rough sounds. Strangely enough, when he faced the Emperor in the second act, his back turned to the audience, he produced some of the most pleasing singing. One had the impression that he was saving himself for ‘Nessun dorma’ (in Act Three), which he brought off respectably, but without the glorious high B audiences remember from Pavarotti.

As Liù, Maija Kovalevska brought the house down. Her bright soprano shone in the many high passages, she sang with great musicality, and vocally and dramatically perfectly portrayed the loyal and enamored slave girl. As her master, King Timur, Hao Jiang Tian not only looked the part, but sang with dignity, expressiveness and a very resonant bass.

Joshua Hopkins was an impressive Ping, Eduardo Valdes brought a lyrical tenor to the role of Pong, and Tony Stevenson was a competent Pang. Their trio at the beginning of Act Two was not only well sung, but also very well acted. As Emperor Altoum Bernard Fitch sang the role instead of producing the tremulous whine one sometimes hears as a characterization of an old man, although he had to deliver his lines from high up and towards the back of the stage. Such is the scale of this production that his throne was but a small element in this stupendous set which features decorated columns, tiled roofs, pavilions, and a pond with bridges. The stage is crowded with courtiers, standard-bearers, dancers, acrobats and, dressed as the populace, the large, powerful Met Chorus. This is grand opera at its grandest.