Trial by Jury – comic opera in one act to a libretto by William S. Gilbert with music by Sir Arthur Sullivan

The New York Gilbert & Sullivan Players has been entertaining New York audiences with its productions for more than thirty-five years and amassed quite a following. Reprising the double-bill first presented three years ago, “Trial By Jury” was followed by a witty playlette called “G & S À la Carte”, an imaginary soirée with musical numbers drawn from other G & S works. 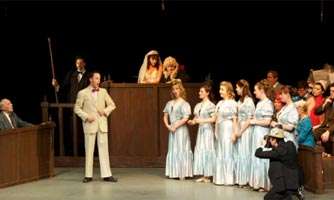 “Trial By Jury”, a spoof on the English justice system, takes place in the court of the Exchequer where the defendant, Edwin, has been summoned by the plaintiff, Angelina, to appear in a breach of promise action. With the jury assembled and the public gallery full, the Usher gives some sage advice to the jurymen, essentially suggesting that they can ignore the defendant altogether. The defendant arrives and it becomes obvious that his character is not above reproach. The Judge enters and makes it clear that he is quite capable of trying this case, because he attained his high position by falling in love “with a rich attorney’s elderly, ugly daughter”. But after having been appointed to the bench, he wasted no time in throwing her over since she “could very well pass for forty-three in the dusk with the light behind her”. Counsel for the plaintiff enters, the jury is sworn-in and a chorus of bridesmaids, ready to attend Angelina’s wedding, enter followed by Angelina herself. All except the defendant are immediately entranced by this lithesome bevy of beauties. The defendant puts forward the rather feeble defense of his fickle nature and says that he will marry one young lady today and another tomorrow if he could, despite it being a serious breach of law. The dilemma seems insoluble, until the Judge finally loses his patience and declares that the best and only solution is for him to marry the plaintiff himself.

Those who took on principal roles all have substantial credentials in either opera, music-theater or G & S, yet at first the cast seemed a bit insecure, the entrance of the spectators and bridesmaids rather uncoordinated and the text unclear, but things improved. Stephen Quint played the outrageously self-indulgent Judge to the hilt, occasionally stealing scenes with his silly repartee and engaged in a bit of whimsical terpsichore that was the highlight of the performance. Kimilee Bryant, a Broadway star in her own right, was delightfully comely in her role as the plaintiff Angelina. Cameron Smith’s tongue-in-cheek characterisation of the defendant was most amusing. Also deserving praise were David Wannen, as the Usher, whose stentorian voice was sufficient to bring the throng to order, and Richard Alan Holmes, as plaintiff’s counsel, a veteran of almost thirty years with the Company. Founder and guiding light, Albert Bergeret, conducted and directed the performance ably, keeping the tempos lively. 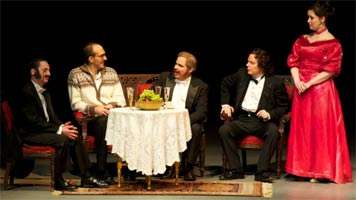 The setting for the soirée, we were to imagine, was the party that followed the premiere of “Trial By Jury”. In attendance were the soon-to-be famous duo celebrating the success of their first collaboration, brilliantly portrayed by Stephen O’Brien (Gilbert) and Stephen Quint. They looked and acted so remarkably like the real thing, arguing about one insignificant matter or another. The famous impresario, Richard D’Oyly Carte, in a standout performance by Holmes, was ever dreaming about future successes. Caítlín Burke was impressive as the woman who would later become D’Oyly Carte’s wife. The conversation among these four led to their imagining future productions, which thereupon came to life as excerpts from later operettas, the texts for which were either as written or as revised by David Auxier to suit the context. Witticisms abounded.

Then suddenly someone from the audience shouted that there was something wrong! Invited onto the stage when he refused to back down, this young fellow proceeded to advise the players that some of what they were either saying or suggesting was anachronistic. They had to admit that he was right, that the D’Oyle Carte Company had not yet formed in 1875, and that D’Oyle Carte did not marry Helen Lenoir until much later. He might also have pointed out that Puccini (whose name was mentioned along with Verdi as examples of great opera composers) was only seventeen in 1875. After being ushered from the stage, Walter reappeared so frequently to correct inaccuracies (mimicking the dilettante) that he was finally invited to stay. Numerous witty references to later G & S works delighted us.