Peter and the Wolf

Children of The Royal Ballet School 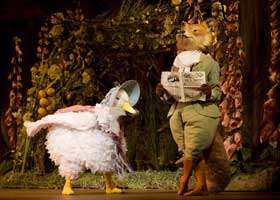 Increasingly, Christmas means suspending one’s critical faculties and submitting to unrelenting seasonal schmaltz – at least The Royal Opera is holding out with a production of “Tannhäuser”. The Royal Ballet, with pound signs in their eyes and giving in to the zeitgeist, has scheduled yet again The Tales of Beatrix Potter, Frederick Ashton’s choreography for a 1971 film, brought to the stage in dire times when the company’s future seemed uncertain. If you like dancing furries, then it is for you; if you wonder why these superb dancers have spent years and years of training and striving to dance in one of the world’s top ballet companies only to don a mask and a fat suit, you may not like it that much.

True, the masks and costumes are superb, and underneath all the padding there is Ashton’s witty choreography, but John Lanchbery’s brash compilation of Victorian music and “lost” ballet numbers can soon tire the ear. Tales of Beatrix Potter can only succeed wholly if the company dances it with total commitment to the work and respect for the choreography. I have no complaints about the former – these long-suffering artists cheerfully skip their way through the 68 minutes and seem to be enjoying themselves, but what worries most is their general lack of concern for Ashton’s steps – only three dancers on opening night did them any justice. Watch the film and then compare present-day performances to see how fudged and smudged the choreographer’s speedy steps are executed – just because we can’t see the faces doesn’t mean to say we can’t see what their feet are doing.

Jonathan Howells took Ashton’s own part of the hedgehog Mrs Tiggywinkle and brought subtlety and wit to the part, the benign character shining through the inexpressive muzzle of the mask. Similarly, The Royal Ballet’s finest Ashton stylist, Laura Morera, made much of her Pig Wig, treating it with all seriousness as choreography to be respected. Finally, Ricardo Cervera brimmed with urban superciliousness as Johnny Town-Mouse. Elsewhere there was laziness, imprecision and several steps and moves which never came from Sir Fred. It is time for this ersatz ballet to be given a rest.

At least there were adult dancers (for the most part). For some performances of Tales of Beatrix Potter, it is being paired with Matthew Hart’s 1995 Peter and the Wolf, an imaginative working of Prokoviev’s orchestral narrative originally made for The Royal Ballet Lower School Annual Matinée. The stage is bare except for a central podium, representing the tree, and the performers are clad in the late Ian Spurling’s witty and colourful costumes. But the Wolf apart, all the dancers are children, which for a programme presented by The Royal Ballet and charging up to £70 a ticket seems a bit rich. This is decidedly matinée fare, made for friends and family in the first instance, but as an opener for an evening at Covent Garden, it cannot be considered as anything other than terribly lightweight.

Hart’s choreography uses large forces of children who are, naturally, not expected to do that much, except for moving about in blocks as hunters, trees, the lake and even a wall. The “lead” children have more character but again, what they are called upon to do is perforce not demanding. The only “adult” role was originally made for the then 16-year-old Martin Harvey, and here, no doubt to justify being a “Royal Ballet” presentation, danced by Sergey Polunin, the company’s wunderkind principal who is called upon to stretch and jump and not much else as the Wolf. It is pretty insulting stuff for an artist of Polunin’s rank and prowess. All credit to the children, not least Kilian Smith’s perky Peter, but it is not a work I ever need to see again. 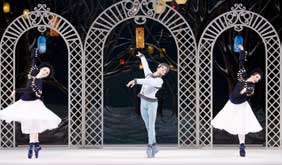 At least for most performances there is some “grown-up” choreography in the shape of Ashton’s 1937 skating ballet Les Patineurs. Readers need only to look at my review last year (link below) of this work to see how much I rate it – a work of intelligence, wit and subtlety, an abstract ballet over which is laid a setting – a Victorian skating party in the park – which contains more brilliance in its 25 minutes than many a full evening work by lesser creators.

At least this revival has been properly handled, and I have nothing but praise for all concerned, starting with the magical recreations of William Chappell’s beautiful sets and costumes and then Paul Murphy in the pit at the head of The Royal Ballet Sinfonia, who kept tempi up, lending impetus to the work and demanding speed and fleetness of foot from the dancers. They responded magnificently from a well drilled corps of Patineurs, as one in their musicality, up through the red girls (ideally matched in physique and line) to the virtuosic Blue Girls, queens of the ice, in the form of Laura Morera and Samantha Raine.

Rupert Pennefather and Sarah Lamb delivered the romantic White pas de deux with immense style and a seamless quality of movement, so essential to maintain the illusion of movement on ice. It was, as last year, Steven McRae who delighted and dazzled as the Blue Boy – spinning and leaping with insouciance, stylish yet more understated than in previous revivals, and all the better for it. He is a cheeky chappy, a show-off on the frozen lake who only once loses his cool as even he loses his balance! His final, seemingly endless spinning as the curtains closed was dazzling in its speed, McRae becoming a whirring blur – I only wish the company revived the old tradition of having the curtains open again to reveal the Blue Boy still spinning – McRae could do it.

Catch Patineurs if you can, although different casts will brings different qualities (and competences) to the work. And if you like feathers and amphibians, stick around for Jemima Puddleduck and Jeremy Fisher, otherwise go for an early supper and have the duck foie gras and frogs legs.