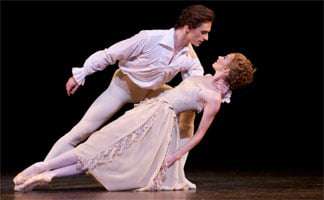 This performance of Kenneth MacMillan’s Manon was a curate’s egg. The revival of this 1973 money-spinner is characterised by cleanliness and good manners – l’Abbé Prévost’s 1731 tale of the fall from grace of an innocent young man through his love for the amoral Manon is suffused with the corruption, depravity and licentiousness of the Régence and the early years of Louis XV’s rule. MacMillan, always one for looking at the seedy underbelly of the human condition, was attracted to this story and created from it one of his most successful ballets, highlighting the unpleasant contrast between the rich and the poor, the pure and the morally corrupt, the dishonest and the depraved. He was aided by Nicholas Georgiadis’s wall-of-rags set which serves the scenes with little rearrangement and clever lighting. However, it is all now so nice – the whores of the Act Two brothel seem awfully good girls, the thieving and violent street urchins of the opening scenes now loveable ragamuffins, and everyone is now so spotless, Monsieur’s clutching of a kerchief to his nose in the First Scene to stave off the foul smells is now simply unbelievable. Certain pools of delicious darkness remain, not least Gary Avis’s sneering sexual predator of a Monsieur G. M. for whom money and sex are power, the gewgaws he offers Manon clear payment for his perversities – I delighted in the near orgasmic joy of his murder of Lescaut, Manon’s brother at the end of Act Two.All was not necessarily well in terms of the dancing which, if technically more than competent (except some of the men who, if one is charitable, were having an ‘off’ night), leaves a lot to be desired in terms of style – only one of the five women who danced at the Louisiana dockside opening to Act Three seemed certain of the very specific ports de bras demanded by the choreographer, settling for a gentler, more classical version. Indeed, there was a tendency from most dancers to ‘right’ the off-centred nature of much of MacMillan’s steps, bringing them to the vertical – more classical, easier and more comfortable, but not what is required. Itziar Mendizabal, as Lescaut’s mistress, made little impression, her steps executed well enough but without character – there is more to an experienced harlot than a single sluttish pout. As Lescaut, José Martin may be experienced in the role, and there is much to commend – he is pleasingly sleazy – but his dancing is not always in full focus, and, as with Mendizabal, telling details are missed or go for nothing, and detail is what makes MacMillan’s characters live. A mention for James Hay’s excellent Beggar Chief, a diminutive cock-of-the-walk who danced his solo and ensemble as well as has been done for many a year; Christina Arestis made for a deliciously sozzled Madame who presided over her riotous brothel with increasingly blurred vision. 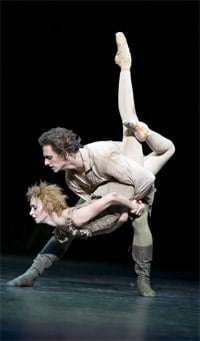 But Manon is all about the eponymous (anti)heroine and the hapless des Grieux. In a double debut, Sergei Polunin, The Royal Ballet’s pantherine principal, who made such a mark recently as Armand in Ashton’s Marguerite and Armand, was paired with Lauren Cuthbertson. Polunin has all the makings of a great des Grieux – however he started hesitantly, his fiendish Act One solo did not sing as it should, and certain interpretative corners were cut. He settled considerably, presenting a hapless young Chevalier and slowly letting himself ‘go’ in the part – his Act Two solo was fine dancing indeed, but he truly convinced any doubters with a searing Act Three, enormous leaps and vertiginous spins, all at the service of character. His final pas de deux with the dying Manon was heart-breaking and risky, which is exactly as it should be – we need to be on the edge of our seats. One telling detail (lesser artists have gone for silent-movie sobs and shoulder-shaking at the dying moments): Polunin’s des Grieux was wracked with exhaustion, numbed by the despair of grief – he knows she is dead before he pointlessly tries to wake her. Superb! Cuthbertson took some time to find her way in to the role – she does, however, exhibit a more pliant back and torso, more use of shoulders and arms than many other dancers, and there were small details made visible. She too was hesitant at first, not initially convincing of her love for des Grieux (her wig and make-up made her look too old). In the brothel, however, the vacillation between her love for him and that for the trappings of luxury were lucidly expressed, the nervous to-ings and fro-ings during the subsequent card game and the petulant anger when it all goes awry spot on. She was a broken woman in the last Act, mutely resigned to her rape by the Gaoler, helpless and hopeless in the final swamp scene. She too took many risks in her dancing.Martin Yates again conducted his re-orchestration of the score, all rather too slowly – there were several times where his focus seemed more on the sound from the pit than the dancing. Having greeted his re-scoring at the last revival, this time it sounded thinner and less supportive of the dancing; it is all very well to be told that the choreographer was not happy with the original, but the fact remains that it is what he choreographed his ballet to – the balance has been altered.