Diana and Actaeon – Ballet to choreography by Liam Scarlett, Will Tuckett & Jonathan Watkins with music by Jonathan Dove and a libretto by Alasdair Middleton 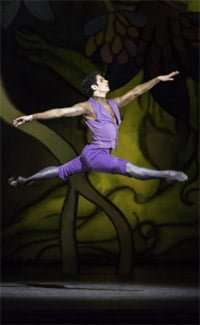 A massive and costly undertaking, Metamorphosis: Titian 2012 represents not only The Royal Ballet’s contribution to the Cultural Olympiad but also Dame Monica Mason’s farewell after ten years at the helm of and fifty-four years with the company. Eschewing a congratulatory gala she has opted for a final hurrah of creativity, bringing three composers, three designers and seven choreographers together using as a springboard The National Gallery’s present display of the three great Titian canvasses Diana and Callisto, Diana and Actaeon and The Death of Actaeon. Daring indeed, and if the whole project is ultimately a failure, it is a noble failure, an all-too-rare attempt seriously to emulate the fever of cross-disciplinary creativity which flared under the aegis of Sergei Diaghilev for his Ballets Russes. This is a serious project in Gesamtkunstwerk bringing together three contemporary visual artists of world renown, three composers of similar stature and seven choreographers all but five of whom are from The Royal Ballet stable and the remaining two who work closely with the company. That it does not, ultimately, work, is the fault of no-one, and creation must happen in every artistic discipline if it is not to ossify and crumble.

The evening is one of interesting contrasts and proves to be interestingly scheduled, moving from cerebral and almost futuristic abstraction in Machina, through design-conscious contemporary with an evocation of narrative in Trespass to over-designed, somewhat old-fashioned narrative in Diana and Actaeon. The comfort zone for today’s audience is the middle piece, the first probably too weird, the last undoubtedly too plodding. 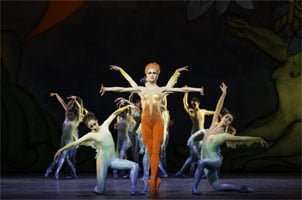 Announcing in reverse order, Diana and Actaeon features Jonathan Dove’s lushly scored composition, evocative of Ravel at times, Stravinsky at others and film music overall. It is a genuinely successful score which, alas, the three choreographers do little with; choreography by committee does not have a particularly illustrious track record and Diana and Actaeon will not go up onto the honours board for that particular form of artistic creativity. The trio’s brief was to provide a narrative, so the story of Diana being surprised at her bathing pool by Actaeon and his subsequent metamorphosis into a stag to be torn apart by his own hounds is told (strange that all seven choreographers chose to ignore the Titian canvas depicting Callisto, because her fate is magnificently juicy). The ‘idea’ is three pas de deux each showing an alternative interpretation of the moment the hunter first catches the eye of the goddess. This does not work, as poor Federico Bonelli has to appear three times, knowing all along that any love duet is a mere fantasy and that his destiny is to be shredded by his own hounds.

Marianela Nuñez is an imperious Diana, although the choreography’s default setting for her of splayed fingers and hyper-extensions becomes tedious. Liam Scarlett finds little of interest to do with her nymphs who waft and wander fairly aimlessly on and off the stage, and Will Tuckett’s pack of dogs is pretty tame stuff, more musical theatre than classical ballet. Chris Offili’s designs are overpowering, the set a kaleidoscopically coloured exercise in seventies psychedelia, a trippy forest in which Diana, clad in Day-Glo orange with matching wig prowls, bathes and despatches the hapless mortal. The costumes are more Soviet ice dance than anything else, and whereas we still smile at Ian Spurling’s wacky designs for MacMillan’s Elite Syncopations, these are best forgotten. Of note the vocal contributions by Kim Sheehan and Andrew Rees, the former fearless in her demanding coloratura, the latter emphatic and impassioned. 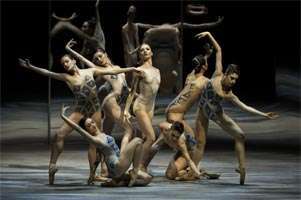 Trespass hints at the Actaeon episode with a series of tableaux to Mark-Anthony Turnage’s interesting, arresting stop-start score. The composer has been generous indeed, providing a composition of real variety and tonal interest and, as with the other musical elements, played with conviction by the ROH orchestra under Barry Wordsworth. Mark Wallinger’s curved wall and inner convex mirror provide a happy mise en scène, startling lit (as are the other two works) by the impressive Lucy Carter, who deftly manipulates what we see. The dancers cannot be faulted, from Melissa Hamilton’s Diana (one assumes) to the pairings of Stix-Brunell and Kish, and Lamb and McRae, and the very strong corps de ballet packed with exciting young dancers straining for stardom in years to come. 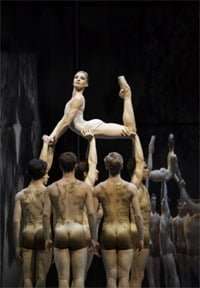 There are moments of real choreographic interest too – the opening men-only section is strong, the choreographers’ paean to the male body in motion. Indeed, the collaboration between Marriott and Wheeldon appears particularly close, their styles frequently fusing, making for a work of greater unity than the other two. Two pas de deux are notable, characterised by difficult and complicated lifts, one impressive pose of gravity-defying counter-balance between Lamb and McRae artfully evoking the wondrous Bernini sculptures of Pluto and Proserpina and Apollo and Daphne. But here resides the worm in paradise: it is overly static with little to no dancing as such, more a series of deftly and intelligently contrived lifts – both male leads deserve laurels for their extraordinary prowess in them. Corps de ballet work, once past the opening male-fest, tends to the pedestrian with little that catches the eye as new or, indeed, beautiful, although in what is presumably the bathing scene the groupings are precisely that, arresting in their composition. Costumes are simple, the women’s decorated with crescent moons, the men’s with angular patterning. 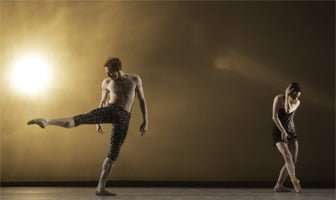 Of most choreographic interest is the Brandstrup and McGregor collaboration, Machina, which opens the programme. It is far from ideal, with Conrad Shawcross’s enormous robot slowly revealed to dominate the stage. It is intended to represent Diana, but could be the result of sponsorship by a building company for all it contributes to this ballet. It stands, a single arm circling, whirring and whizzing, behind the dancers, a sort of magic wand with a luminous end ever moving, ever a distraction from the dancing, dwarfing the dancers on an otherwise bare stage, an expensive folly, bringing nothing to the party. Without it, Machina is an intriguing, disturbing work, essentially a quartet (the wondrous combination of Acosta, Benjamin, Rojo and Watson) with six extras here and there, set to Nico Muhly’s eclectic score. Carter’s lighting is masterful, spare and precise, and the costumes echo that simplicity, the simplest possible. This work is the most cerebral and the deepest, the Diana Titian trilogy distilled (as with Brandstrup’s recent work, Invitus Invita, Racine’s Berenice reduced to its essential oil).

Two pas de deux bookend the ballet, set to peaceful, serene, stately music, adagio sound and movement of real intensity. Elsewhere a duet for Watson and Acosta contrast the pair – both bare-chested, Acosta in the palest of blue tights, Watson is mottled dark breeches, their skin-tone, musculature, body shape and movement style all in contrast. Rojo exudes inner calm and control, with a voluptuous movement quality while Benjamin, as always, astonishes with her affinity with new choreography, investing herself in her every move.

As a trilogy, Metamorphosis: Titian 2012 does not work, ultimately less than the sum of its parts, but as a rare exercise in genuine creativity, it cannot be other than praised. From it, Machina (senza machina), deserves to be seen again, and certainly the scores of all three works deserve an afterlife. It is brave and bold as a project and stands as a testament to Mason’s belief in the art form to which she has devoted her life. For that, and for everything she has contributed, created, achieved, we salute her.