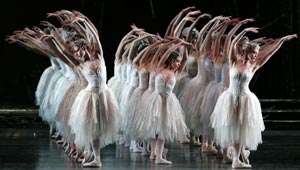 The Royal Ballet opens its latest revival of Swan Lake (I saw the 945th and 946th performances) with superb timing – the excitement around the film Black Swan has sent the phone lines at Covent Garden buzzing as the public wants to come and see what all the fuss is about. There is talk that the question “and at which performances is Natalie Portman dancing?” has already been asked several times.

The present production dates from 1987, and was praised and criticised in equal measure when new – praised for the extensive research which went into the 1895 Petipa/Ivanov production for Saint Petersburg and the recreation of what continues to be a wholly satisfying Act IV. David Bintley’s Act I waltz revives the concept from that production of the inclusion of stools and there are many felicities in what is a very good version of the text indeed.

Criticism for the wholesale jettisoning of all the accretions the ballet had acquired over the decades, not least Frederick Ashton’s lyrical Act IV, his delicious pas de quatre and the Neapolitan dance (which old Sir Fred resolutely refused permission to include in this production, so piqued was he by Anthony Dowell’s proposals). Needless to say, when the master died, his legatee permitted its inclusion, a lone Ashtonian jewel. 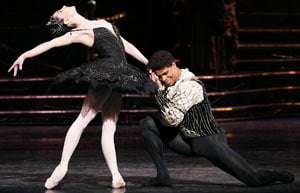 The criticism was also levelled at Yolanda Sonnabend’s sets and, to a lesser extent, costumes which are now helplessly, hopelessly dated, the 1980s in full cry, with its tasteless kitschness undimmed by subsequent decades – swags and wrought iron, beads and baubles, ribbons, clutter and props a go go. Costumes are fine, once you accept the shtick of the ballet being set in the 1890s, although the Act III ball gets by that by aping one of the Romanov fancy dress evenings, so allowing for non-period flummery. The final apotheosis of poor old Odette and Siegfried prone on what looks like a huge yet cheap Christmas decoration of silver-sprayed twigs and dragged across the back of the stage with all the ceremony of a crate of beer has never worked. The swan tutus for the corps de ballet remain the knee-length aberrations of the 1987 original design, but, one is glad to say, Odette gets a proper, classical tutu, head feathers and a little crown, just as you would expect.

What this extra flim-flam does is to detract from the simplicity of the story – details are all too easy to miss, the poetic heart of the narrative masked at times. Things have improved over the years, but a new production is sorely needed. Before that, some basic flaws in the lighting need to rectified – the stage is lit in bands of light for the lakeside scenes, which means that rows of swans emerge from and disappear into the penumbra; that cannot, surely, be a positive artistic decision – one of the basic rules for dance is that the audience must be able to see the dancers… 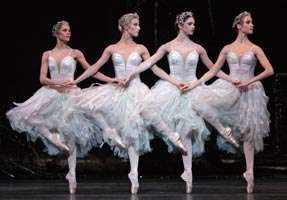 But to the dancing. I saw both opening day casts (that comes in at just under six hours). The comparison was illuminating. The corps de ballet have been well rehearsed and move with commendable uniformity, sharing a common musicality. They deliver Ivanov’s mesmeric movements with aplomb, the Two Swans in each performance deserving particular praise.

The ball scene contains the national dances. Ashton’s Neapolitan stands out from the crowd here, and I was impressed by Liam Scarlett’s afternoon showing – what he lacks in technical finish, he makes up with character. In the evening, Ricardo Cervera showed what a true Ashton dancer can make of this short gem – feet literally flying through the steps. I liked Emma Maguire in the afternoon who also impressed with some neat dancing in the Act I pas de trois. The Spanish dance is now about as Spanish as a tepid packet paella in Middlesbrough, the women polite and provincial, the men just in a bad mood – the Spanish have a farouche quality, true, but don’t have to be in strop. It says much for the atmosphere that by the Mazurka (the fourth national dance) you are longing for the Black Swan pas de deux to start. 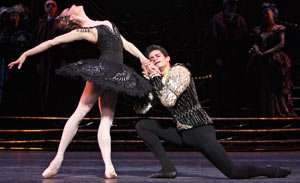 The Act I pas de trois is an exemplar of Petipa’s mastery, and the evening trio showed what can be done with it – it was better danced on this occasion than I have ever seen in this production: Laura Morera continues to be eye-catching in her phrasing and precision, Yuhui Choe (surely the next female principal) a miracle of softness, not least in her beautiful arms, and Sergey Polunin, the company’s wunderkind, whose aristocratic bearing and technical strength never fail to impress literally sailed through his variation, partnered with aplomb and didn’t seem to break a sweat in the process.

I felt sorry for Nehemiah Kish, the evening’s Siegfried, who had to sit and watch Polunin in flight. Kish is newly come to the company, probably because he is reasonably tall (an attribute always at a premium in male dancers), but he is no virtuoso, nor indeed an actor. He dances pleasantly enough, but there is a worrying sloppiness in landings and his hands are inexpressive. He acts the generic ballet prince and there are few individual touches to leaven his performance. 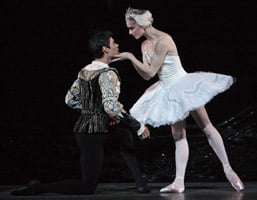 Kish is, at least, a decent partner, and needed to be with Zenaida Yanowsky as Odette/Odile: she is statuesque and has always used her height to advantage in solo dances but when it comes to pas de deux, cannot disguise the fact that when on pointe she towers over her partners, and Kish is no exception. She wisely opts for the grand style in dancing Odette – each gesture given weight and meaning although I do find some of her delivery somewhat arch. She is apart from the other swans, a true queen who, at the end of the ballet resolves to kill herself despite their pleadings. Yanowsky has the measure of the lyrical Odette in terms of execution of the choreography, but the flashy brilliance of Odile in Act III at times eludes her.

In the afternoon, the diminutive Sarah Lamb impressed greatly – not only is she in full command of the technical demands of the role (the rigours of Black Swan were fulfilled with aplomb) but she has greatly simplified both her interpretation and the performance of her steps – there is an engaging purity now in her Odette who is suffused with a deep melancholy; she dances as if alone, a sad creature doomed from the start. In the final scene, she provoked tears, such was the truth of her ultimate resolution to die. In it all, she was ably abetted by Federico Bonelli, who, from the moment he catches sight of this beautiful creature by the lakeside, is utterly mesmerised by her. His pain at the realisation of his betrayal of Odette was palpable, his desperation to stop her dying genuine. Bonelli has, I feel, not fully recovered from his injury yet – he is less technically secure than he was before, and tension betrays itself in his fingertips as he dances. But Bonelli not quite up to par is still worth watching.

Valeriy Ovsyanikov conducted a highly theatrical performance of the score, eliciting good playing from an alert orchestra. Some tempi were either a little too slow or too fast, but, generally, he kept the momentum going in a brisk interpretation. The strings were particularly noteworthy, and the brass authentically tangy. All praise to Co-Concert Master Sergey Levitin, whose violin solos were delivered with melting subtle beauty.