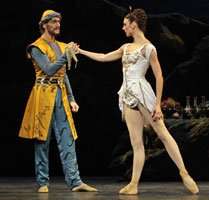 There can be no more pleasurable ballet to review than Sylvia. It is a delight, one of the few ballets that make you smile. It has a silly story and it is uneven, but it is ravishing on the eye, is set to a score of great beauty and contains some wondrous choreography. Délibes’s delightful music is full of toothsome melodies, felicitous orchestration (a seductive saxophone solo in the Act Three Barcarolle makes one purr with pleasure) and delicious invention. Under Benjamin Pope, who clearly both loves and understands this work, the Royal Opera Orchestra plays superbly and relishes Délibes’s lush creation. 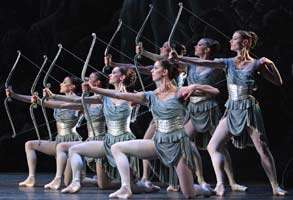 That the context is provided by Frederick Ashton, choreographer of genius and the creator of the ‘English’ style of classical dance makes Sylvia a must-see. The ballet is a recreation (Ashton made it in 1952 and it stayed in the repertoire until the late ‘sixties when he himself as Director of The Royal Ballet let it slip), restored by Christopher Newton in 2004 for the choreographer’s centenary celebrations. It feels right. There is the wonderful score, glorious designs by the brothers Ironside (with skilful modern additions in the same style by Peter Farmer), all painted flats and baroque curlicues and some wonderful choreography. Indeed for Ashton-philes, it provides a ‘missing link’ and much fun is to be had seeing echoes of what came before (Scènes de ballet, Symphonic Variations, Cinderella) and after (Daphnis et Chloé, and The Dream).

While it is true to say that it is not all vintage Ashton, there is certainly more than enough to satisfy, not least in the dazzling title role which was created for his principal muse Margot Fonteyn. This ‘garland for Margot’ is a mammoth role, exploiting the many facets of her artistry and in its technical demands giving lie to the belief held by some that she was not all that technically proficient. The three acts demand different approaches (much in the same way as The Sleeping Beauty – Ashton’s template for all classical dance – does in the role of Aurora): Act One requires a leaping, forceful virgin huntress, Act Two a seductive oriental odalisque and the third the ‘grand manner’, Sylvia in fulfilled triumph.

Zenaida Yanowsky and Sarah Lamb were the eponymous heroine on successive nights, but comparisons would be invidious: Yanowsky first danced the role in 2004, so this is her third time round, a fact clearly shown by her ability to portray a different quality in each act, and the subtlety of her interpretation. She is a tall dancer, and while there were moments when she seemed hurried in fast choreography set on the smaller frame of Fonteyn, the sheer power of her jumps, the brilliance of her attack and the pliancy of her back are mightily impressive. Ashton demands much of his dancers, for while he sets at times furious footwork and speedy movement he also requires extreme épaulement (the twisting of torso and neck in counterpoint) and gracious arms. Yanowsky certainly seeks to deliver on that front, and I especially liked her recognition that Ashton often choreographed to highlight Fonteyn’s beautiful neck and upper chest – Yanowsky often pulls back her head and flashes a smile in a way reminiscent of those iconic photographs of Fonteyn in motion. Strangely least impressive in the first act, she comes into her own in the second when she plays the orientalist seductress trying to get her abductor, the evil Orion, drunk; here her pliancy and beautiful carriage are dazzling. In Act Three she finds wit and rubato in her fiendish solo (set to the famous ‘Pizzicato’) and the beautiful ‘Adagio’. A notable interpretation.

Sarah Lamb by contrast was giving her first performance as Diana’s lead nymph. She is a technically strong and physically beautiful dancer, much smaller in stature than Yanowsky and therefore more likely to find the speed required more manageable, yet she too seemed a little pushed at times. She has not yet found the musicality that is so important in all of Ashton’s choreography, but what disappointed most in what was a very technically accomplished debut was a constant reluctance to bend her torso (another of Ashton’s fundamental requirements), with the result she often looked stiff and a little foursquare. 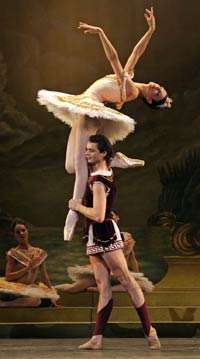 Her three acts were somewhat similar in delivery, but perhaps that will change as she settles into the role. Her Aminta, a love-sick shepherd who finally gets his nymph with divine intervention, was the superb Federico Bonelli, also in a role debut, who showed what can be done in this lightly sketched role – he is totally natural in his persona and each gesture rings true. That he is a dancer of distinction meant that his Act Three solo was delivered with considerable panache – high jumps, soft landings, precisely executed footwork and a beautiful line. He partnered Lamb with care and consideration (the role makes great demands on Aminta as a partner), which can also be said for Yanowsky’s shepherd David Makhateli, which is no mean feat given her height. My admiration for him stops there, for while his dancing was strong and clean, there is a blandness about his performance which means he rarely registers.

The ballet is curious – it is a one-woman ballet really, set amongst often sketchily drawn characters. That Gary Avis as Yanovsky’s Orion made such a mark is tribute to his ability to project and to catch the eye; Bennett Gartside (in his role debut) can be forgiven for not having quite done the same. The role of Eros (who has to stand stock still as a statue for the first twenty minutes, but does get to move about later) was well taken – Joshua Tuifua more precise in his comedy but heavier in his dancing than Brian Maloney.

Laura Morera in the tiny part of Diana made one sit up and notice her. The corps de ballet was on good if not great form, delivering the speed required even if some seem to have forgotten that for all the tunicked campery of their dances, this is still Ashton, and that they should, as he always used to shout, “Bend, bend more”.