This was a meager programme by any standards – by 9.25 the audience was still waiting for the third ballet in this new mixed bill, having seen just 36 minutes of dancing and spent nearly an hour-and-a-quarter in the bars. 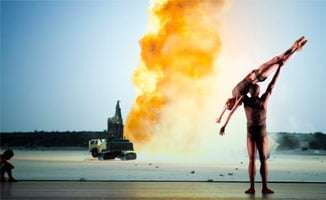 George Balanchine’s Ballo della Regina is, by Mr B’s standards, an amuse gueule, an exquisitely prepared mouthful which is gone in a trice (seventeen minutes in fact); The Royal Ballet’s ageing wunderkind resident choreographer has supplied Live Fire Exercise, nineteen minutes of his trademark movement, a stodgy second course whose ingredients have either been under-mixed or have curdled; Christopher Wheeldon’s DGV: Danse à grande vitesse provides our pudding, a rather over-decorated confection which reveals an undercooked centre. A deeply unsatisfying selection, the component parts of which have been thrown together with little or no regard to their relationship, and an ungenerous one too – given the short running times of the first two pieces, could the dear old Royal Ballet not have inserted another work to beef it all up a little (a pas de deux, trios or quatre might have done the trick)? A good mixed bill sets up internal complements and contrasts, the works building upon each other to provide an evening of increasing satisfaction; this was not a good mixed bill.

Ballo della Regina was conceived as a setting for Balanchine’s last great muse Merrill Ashley, whose technical mastery had him conceiving ever greater challenges. Set to the ballet music from Verdi’s “Don Carlos”, it is a sunny work, a tutu ballet struggling to emerge from the Balanchine chiton work that it is. The music rolls pleasantly along, inspiring the great man to felicitous groupings of the twelve corps de ballet women, a series of sparkling solos and interludes for the four demi-soloists – Akane Takada and Yuhui Choe captured the eye in particular – and the glittering choreography for the lead woman and her partner. Ashley herself coached this production (the company’s first) and it was clear for the off that the performance would be characterised by close attention to Balanchinean detail. Leading it all was Marianela Nuñez in a finely judged performance, a ballerina at the height of her considerable powers exulting in the ever more challenging steps – she proved mistress of them all, inflecting her movement with a sensuality and grace allied to a fine sense of musicality. Sergey Polunin stalked the stage like a panther, his partnering gracious, his jumps and leaps breath-taking in their height and majesty, his landings soft and silent. It was all finished almost as soon as it had started, like the glimpse of a breath-taking view from the window of a speeding train. 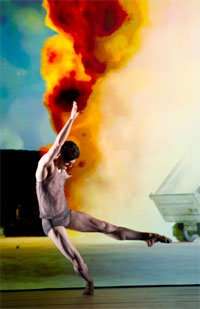 Matters nose-dived thereafter. With Live Fire Exercise Wayne McGregor has created another of his impenetrable works, a self-indulgent piece, cherry-picking yet again from the company ranks (it required a mere three couples) and leaving the majority of the company’s dancers yet again locked out from the process of original creation. All praise to the six dancers who threw themselves body and soul into McGregor’s contortions, twitches, lunges and leaps, but their movement seemed divorced from the other two elements of the work: John Gerrard’s 3-D video projection of a ‘live-fire exercise’ (used by the US army to inure their troops to the explosions of war and conflict) and Michael Tippett’s Fantasia Concertante on a theme of Corelli; three disparate elements that, despite the guff in the programme booklet, have no bearing on each other whatsoever. The music was played superlatively by the Royal Opera House Orchestra under Barry Wordsworth (as indeed were the other two pieces, excitingly conducted by Daniel Capps) – the orchestra sounded engaged and on top form, the strings particularly rich in the Fantasia. Costumes by Moritz Junge are variations on the usual McGregor theme of unisex hot pants and shapeless tops (here see-through). McGregor approaches ballet much in the same way as many modern artists do painting and sculpture: the notes tell us what the work itself does not. 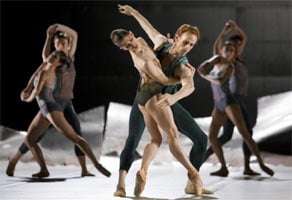 Live Fire Exercise did, at least, make Christopher Wheeldon’s DGV: Danse à grande vitesse look quite good, although it is, in truth, a thin work which paled when premiered in 2006 alongside McGregor’s only truly successful work for The Royal Ballet: Chroma. Here Wheeldon gets his revenge, and it is his ballet which now trumps McGregor’s. It has a coherence and structure and is a clear response to Michael Nyman’s music (his 1993 MGV commission to celebrate the opening of the High Speed Rail line from Paris to Lille). Based on four pas de deux, it swirls and eddies, pulses and pauses nicely enough, but Wheeldon’s is a cool, largely inexpressive neo-classicism which comes and goes without making much of a mark. That said, Leanne Benjamin and Steven McRae fizzed in their sparky pas de deux and Melissa Hamilton caught the eye in her duet with company strong-man and superlative partner Gary Avis, carving a sweep of legato movement which mesmerised. The bent and crushed sheets of metal which form the set are still inexplicable, and costumes, said to provide the ‘organic counterpoint’ remain unattractive.

This provided the close to a deeply unsatisfying evening, which did nothing to enhance the reputation of the company. For that (provided they are well danced), the attractive and choreographically generous triple bill to come of Ashton’s Scènes de ballet, Tetley’s Voluntaries and MacMillan’s Rite of Spring promises much.