Let me deal with all this in reverse order. Firstly, the lure of a second viewing of Serge Lifar’s wondrous Suite en blanc at the Coliseum (see link below) proved too much and with a nifty piece of footwork I made it just in time to catch the work at the end of ENB’s Black and White mixed bill. That meant I had to forgo David Bintley’s anthropomorphic eco-ballet ‘Still Life’ at the Penguin Café and stay only for the first two works in the The Royal Ballet’s new triple bill. There is an internal logic of sorts to programming these ballets together, all being by British choreographers, but musically it was strange to present the Rachmaninov and the Debussy, both of which centre on the piano with orchestra combination. 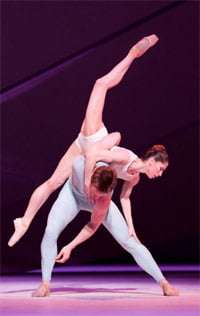 Sensorium dates from 2009 and is by company Principal Character Artist Alastair Marriott, who, with it and other works, has not quite lived up to the promise of his first main stage ballet Tanglewood in 2005. It is fluent and looks superb, with Adam Wiltshire’s beautiful ‘sail’ dominating the stage picture. It is also expertly lit by John B Read, a cool, watery lightscape which perfectly matches the seven Debussy Préludes sympathetically orchestrated by Colin Matthews. The choreography is cool, distant even, which makes Sensorium a work one can admire at best, but never love. Marriott has scored it for two lead couples, a pair of demi soloists and a corps of women. He is at his most fluent with those corps de ballet members, arranging them expertly around the stage and investing them with fluid movement, but I do not enjoy his over-complicated pas de deux work (the second of the two duets for Mara Galeazzi and Bennet Gartside is the shorter and more successful), which involves a great deal of grappling and contortion. If truth be told, it all comes across as rather flat, almost as if a scrim had been lowered between performers and audience, the dancers given no opportunity to engage their audience with cool movement, cool stage picture and cool music; it is not a work I need to see again. 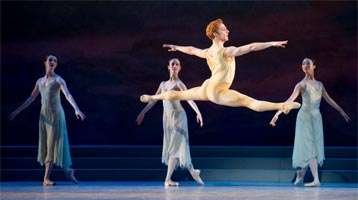 Sensorium suffered hugely by having to follow a work that demands repeated viewings – Frederick Ashton’s late masterpiece Rhapsody, his birthday present to his friend Queen Elizabeth, the Queen Mother on the occasion of her eightieth birthday. It is the work of an Old Master, an expert of the stage, demonstrating his superlative command of his craft, choreography and the music. It was, famously, created for the Russian superstar Mikhail Baryshnikov and the fleetest of British ballerinas Lesley Collier (who coached this revival) and requires a level of bravura rarely seen. There have been revivals over the years but it would be true to say that they have never created the frisson of the first performances. Until now that is. In Sergei Polunin, the twenty-one year old company Russian whizz kid and Laura Morera, that finest of Ashton stylists in the company, The Royal Ballet has found a pairing which evokes and, some would say, rivals the original couple. 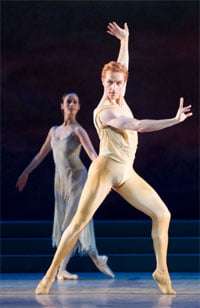 Polunin’s technical prowess is simply astonishing, his jumps breath-catchingly high, his speed astounding, his line of the purest. He sails seemingly effortlessly through this fiendish choreography – Ashton famously asked Baryshnikov to bring his ‘box of tricks’ to the rehearsal studio – and never before have I seen the three ‘waking god’ jumps at the front of the stage done so well. Morera matches him with her speed and precision in a role which she seems born to dance, her beautiful Ashtonian musicality in full flow, her torso twisting in extravagant épaulement, her arms expressive and meaningful, her moments of stasis telling. This was their first performance and they can only grow further into their roles – the audience reaction was explosive at the work’s end; they were conscious of having seen something very special indeed. Corps work was gratifyingly precise and idiomatic, especially the six women, who bent and twisted as they should but rarely do in Ashton; the men were a little more varied, their disparate schoolings rather more obvious, and a last-minute replacement seemed overwhelmed by the demandingly rapid choreography. Rhapsody has undergone two unsuccessful redesigns, the originals having been jettisoned: Patrick Caulfield’s bright Art Deco stage picture was never popular but was preferable to the present ones by Jessica Curtis, a moody, stormy backcloth and rather non-descript costumes, all rather darkly lit by Neil Austin – if there was ballet which requires brightness and light it is Rhapsody. Jonathan Higgins gave a reasonable account of the piano part but the Orchestra of The Royal Opera House was on variable form under Barry Wordsworth. Another, equally starry cast also dances the ballet this season but Polunin and Morera make such a stunning pairing in this work that I recommend them without hesitation – this is what ballet is all about!