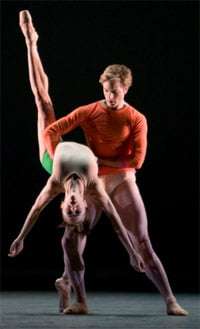 The problem with George Balanchine’s Agon is that is such a good ballet – one of the truly great post-war works in dance – that unless it is coupled with others of similar quality and standing (an Ashton story ballet and a Petipa classical showcase for example) the others can be simply blown away.

Alas, in another example of puzzling scheduling from The Royal Ballet, this superlative work was placed first in a triple bill which also comprised a piece of dubious 70s kitsch and a world première from Wayne McGregor. Difficult to see how it was not all going to be downhill after Agon was over. But fears were only partly realised though.

Let me deal with Agon first. Balanchine’s 1957 visualisation of Stravinsky’s challenging score is simply astonishing: it contains more choreographic invention in its 27 minutes than many a full-evening work, brimming over with so many felicities that the spectator is literally blown away by the sheer brilliance of it all. Set in the simplest of ways against a blue cyclorama and the trademark Balanchinian ‘practice’ clothes of black leotard for the women and white tee-shirt and black tights for the men, it is pure dance.

‘Agon’ essentially means ‘contest’ and in Ancient Greece could include charioteering, music or literature; here Balanchine sets his small cast in friendly rivalry – they show off in essence, demonstrating their individual brilliance or working together to produce effect and delight. It begins with the four men dancing both in unison, in turn and in counterpoint, a perfect response to Stravinsky’s still-startling composition.

The company was fielding its big guns in Carlos Acosta and Johan Kobborg, the latter in his solos and also in his pas de trois with the well-matched Yuhui Choe and Hikaru Kobayashi (who continues to enthral, his dancing marked by intelligence and a deep-rooted musicality) – all three had that sassy Balanchinian quality, the ‘look at how good I am’ element so vital in this balletic ‘contest’.

Brian Maloney, Valeri Hristov and Mara Galeazzi comprised the second trio, the two men delivering an impressively synchronised duo, she coolly in control of her fiendish solo. This was dancing at a high level.

Melissa Hamilton is a young dancer who was, in her earlier years, not considered good enough for The Royal Ballet School, but who now is becoming both the darling of the company’s management and a great ‘hope’ for the future. Tall, leggy, infinitely flexible and with hair of the palest of spun gold, she looks wonderful, and in Agon, taking the central pas de deux role, a natural in Balanchine (we are yet to see her in anything strictly classical).

Her partner was Carlos Acosta, and surely this pairing comes closest to Mr B’s ideal in terms of look at least; created for Arthur Mitchell and Diana Adams, this pas de deux was daring in 1957 in that it partnered a black man with a white woman. Balanchine had no truck with the racist side to American society of the time, and used Mitchell extensively in his works before the dancer retired and went on the found the Dance Theatre of Harlem.

Hamilton moves through this intricate and still-startling pas de deux with haughty ease, and if Acosta does not observe the exact minutiae of Balanchine style, he clearly loves and relishes this role and wholeheartedly believes in it. Their duet was, rightly, the highlight of this performance. Excellent playing too from the orchestra in this tricky piece – all praise to young conductor Daniel Capps. 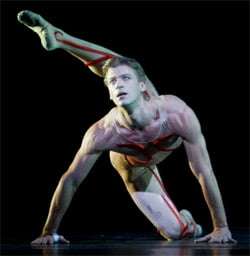 Glen Tetley’s 1977 Sphinx is new to the Royal. It is impossible to say why a company with arguably the richest repertoire of any classical ensemble, most of which moulders away unperformed, should acquire this piece of 70s schlock. Tetley entered the B team of choreographers with his 1962 Pierrot Lunaire but thereafter failed to justify that ranking with any subsequent work (Voluntaries comes close).

Sphinx is overblown in almost every aspect, from Martinů’s loud and unsubtle Double Concerto to the choreographer’s own input (‘modern ballet’ as the gushing programme note helpfully informs us).

There is a story behind this tedious three-hander: bored Sphinx (well, she does sit around for such a long time, waiting for another hapless traveller to pass by) is excited by the arrival of Oedipus but punished by her minder the god Anubis for falling for the human (this nonsense is all thanks to Jean Cocteau for his barmy conflation of Greek and Egyptian mythology).

Not that much is intelligible from what happens. Tetley works his dancers hard with gruelling moves and enchaînements which throw classical, expressionist and even orientalist movements into the pot. It is all irredeemably 70s, from the grotesque winged platform for the Sphinx designed by Rouben Ter-Arutunian to Willa Kim’s decorated body suits and headbands.

For the record, Marianela Nuñez did her considerable best to inject life into this dead duck of a work, Edward Watson projected as much malevolence as he could as Anubis and Rupert Pennefather ploughed his way through the choreographic mire. Barry Wordsworth was at the helm for this and elicited suitably rumbustuous playing from the orchestra, with the admirable Henry Roche at the piano. 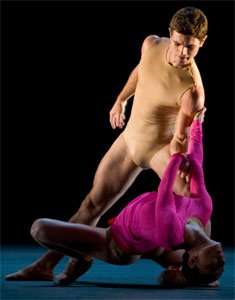 The words ‘new ballet by Wayne McGregor’ do little to quicken the pulse these days, but Limen is a solid work and demonstrates how his own choreographic style has changed by working with classical dancers. McGregor is the company’s Resident Choreographer, and while his works are not always what one would expect or, indeed wish, for the company, he clearly energises the dancers, which is vital.

Limen is striking in the first instance for Lucy Carter’s lighting, which in the first section succeeds to make dancers appear out from and disappear into nothing – quite brilliant, as is her use of strips of coloured light and subtly changing stage washes. Carter has taken McGregor’s brief of exploring the idea of liminality, the thresholds of light and darkness in spectacular fashion.

The music is Kaija Saariaho’s cello concerto Notes of Light, the soloist being Ansii Karttunen, for whom it was created. It is a stimulating and highly interesting score, itself an exploration of liminality and a musical evocation of a solar eclipse. Soloist, orchestra and conductor responded wonderfully to its challenges and produced a wholly satisfying and genuinely exciting musical experience.

And so to the dancing: McGregor has the pick of the company’s finest, and here fielded a stunning array of artists, all of whom had their chance to shine, from Steven McRae’s eye-catching technical brilliance and astonishing fluidity to Eric Underwood’s elegant muscularity, Paul Kay’s stocky flexibility, Sarah Lamb’s ice cool imperturbability and Edward Watson’s extraordinary affinity with the choreographer’s intentions.

McGregor’s movement palette is recognisably his: twitching movements, undulating backs, the exploration of the space surrounding the dancers’ bodies. But added to that is an increasing lyricism, most evident in a truly beautiful pas de deux for Underwood and Lamb, playing on the same contrast of skin colour as explored in Agon. For me Othello and Desdemona were immediately evoked, especially at the end of the pas de deux, with Lamb lying lifelessly limp across Underwood’s arms.

Limen is not perhaps a great work, owing to MacGregor’s limitations, but it does possess moments and sections of brilliance and thereby deserves praise.

With the removal of Sphinx and its replacement with a work of greater interest and quality (by Ashton or MacMillan dare one suggest), this would have been a truly great and consistently exciting triple bill.