The Royal Opera could hardly have chosen a more appropriate evening for its latest revival of Francesca Zambello’s production of “Carmen”. Soaring temperatures and heaving crowds in the Covent Garden Piazza had the audience feeling the heat even before the curtain had lifted on the sweat and sizzle of Zambello’s sultry Spanish setting. This “Carmen” heaves and writhes with countless sticky bodies and, as promised in the publicity, a real horse and donkey.

Scarcely can this stage have hosted so many singers, actors and dancers but if Zambello manages anything, as revived here by Duncan Macfarland, it’s an impressive sense of spectacle. Her shock and awe tactics certainly astound and it’s easy to miss important plot-points when distracted by the many tiny scenes being enacted by the extras almost all of the time. But it’s telling that the most dramatically impressive moments occur when the stage is almost empty, such as Don José’s Act Two confrontation with Lieutenant Zuniga, or the final tragic climax outside the bullring. That scene brings the most brilliant image in the production: as Carmen slumps, stabbed, red ribbon and white petals fall from the high walls of the bullring and surround the shattered Don José. The finale also makes the most sense of the huge cast. The flair and pageantry of the arrival of the bullfighters is more overblown than anything yet seen but the massed crowd’s disappearance into the bullring leaves Carmen vulnerable and terrifyingly alone.

Carmen certainly seems invulnerable as she arrives from the throbbing, smoky confines of the cigarette factory in Act One. All eyes are on her and Christine Rice convincingly commands the attention of the house. Fittingly, she has a larger vocal presence than anyone in sight but she’s so aggressively sexual that she makes Carmen difficult to like. This, though, is only in line with Zambello’s production as a whole which only bolsters the opera’s innate misogyny with a “Nuts” magazine understanding of female sexuality. Emerging from the cigarette factory, Carmen and her fellow working women are after one thing alone, which the surtitles amusingly insist is “love”. 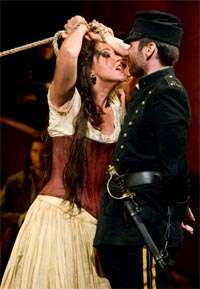 Bryan Hymel’s Don José is suitably torn between duty and love and if his accent wobbles during the French dialogue, his declaration of love for Carmen during Act Two is so moving that it hardly matters. That he falls for Carmen so suddenly feels like a failing of the libretto, rather than of Hymel’s reading of it. Elsewhere, Dawid Kimberg sets the sleazy tone early on as Moralès, the army corporal with more than the changing of the guard on his mind. The object of his flirtations is Micaëla, sung by Maija Kovalevska, whose bright winsome tone and impassioned third-act aria elicited one of the loudest cheers of the night, but whose physical acting is perhaps a little awkward. Aris Argiris’s performance as Escamillo is terrific and the production misses him when he’s not present. His arrival on a very large and very real black horse might have come off as one of the most cynically crowd-pleasing gestures of all, but it really works, not least because he’s Escamillo and he would ride a bigger horse than anyone else.

Constantinos Carydis makes his Royal Opera debut with this fourth revival production. At this opening-night performance he led a propulsive and energetic account of Bizet’s score with the Royal Opera House Orchestra as dependable as ever. Full of passion too were the members of the Royal Opera Chorus and special mention must be made of the children who threw themselves into their first scene choruses with scene stealing panache. Zambello’s production is now in its fourth run, with this its second outing in the current season alone. Cleary popular with audiences, Zambello’s everything-but-the-kitchen-sink-approach, is cluttered, distracting and noisy but undeniably impressive and the less-specialist audience that “Carmen” usually brings in certainly won’t feel short-changed. Those that don’t see it in the Royal Opera House itself can catch it live on a BP Summer Big Screen on June 8 and in cinemas across the land when it is released in 3D later this year.