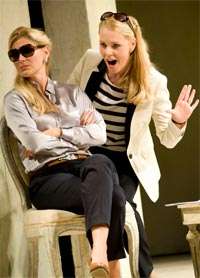 The Royal Opera launched its 2010-11 season with this seventh revival of Jonathan Miller’s 1995 production of Mozart’s comedy “Così fan tutte”; indeed, Miller returned to direct this rather low-key launch to the season (most of the company are in Japan, where “La traviata” and Massenet’s “Manon” are being performed). There was an innovation on this night (following the Met): this was the first of the Royal Opera’s planned live broadcasts to over 200 cinemas across the globe; maybe a dull cinematic debut: the setting is one room (Mozart imagined a coffee house, lounge, garden and bedroom); the lack of variation in the scenery makes the evening drag.

This returning production of “Così” was updated with technology; so there was Apple’s iPhone 4, allowing the modern-dress characters to take pictures and call each other. Don Alfonso seeks to control the four principals (two pairs of lovers) by persuading the two young men that their women can be unfaithful. The attempts by the disguised men to seduce the two sisters yields comedy and pathos in equal measure. 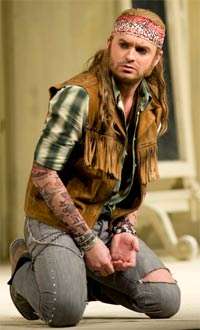 Act One was weighed down by some turgid tempos, and the four lovers not carrying the action well enough. Thomas Allen showed what an experienced Don Alfonso he is: he exuded fun, cynicism and, when paired with Rebecca Evans’s Despina, there was much joie de vivre. Evans was a joy to hear and watch. The problem with “Così” is that it is an intimate opera that is best heard in a small(er) house: there is so much beautiful music that exploits exquisite voices in fine fashion, and so the main quartet of singers, who were all so very careful with their delivery, did struggle at first.

Fiordiligi was sung by Maria Bengtsson: her upper range was full and soared beautifully, but her lower voice was almost inaudible to begin with. Such problems were overcome in Act Two, which was a much more fulfilling experience. Fiordiligi’s sister Dorabella was sung by Jurgita Adamonytė (they could have been real-life sisters!) who gave an adequate account, unremarkable but secure. The pair’s lovers were sung by Pavol Breslik (Ferrando) and Stéphane Degout (Guglielmo): the former’s voice was beautifully fruity and clear, the latter’s full and precise. And what fun the pair were, egging each other on, exasperated at the predicament Don Alfonso has conjured, and then happy that there is reconciliation. They clearly enjoyed their costumes, though poor Breslik’s trousers looked painfully tight!

Thomas Hengelbrock, making his debut with The Royal Opera – he returns to conduct the UK premiere of Steffani’s “Niobe Regina di Tebe” later this month – did not capture the fun of Mozart’s music, being accurate and put together securely, but without any moments of relaxation. Catch this revival for the expertise of Allen’s Don Alfonso and the sheer entertainment of Evans’s Despina.