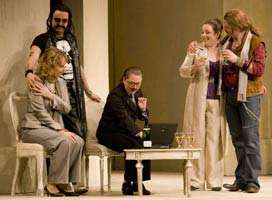 Jonathan Miller returns as director for his production of Mozart’s comedy that was first seen back in 1995 and is now on its fifth revival; some previous ones have employed other directors and which was last seen in October 2004. Colin Davis has given his assured services to this very production on a number of previous occasions, this appearance being no less welcome for all that. This run of “Così fan tutte” is the last production presented by the Royal Opera this season.

This is a production that seems desperate to be modern, from the camera phones (they could not have been present in the original, or, perhaps, even the last sighting of this production) and Starbucks coffee cups to the sharp Armani-like suits and an IBM ThinkPad computer: one kept thinking of product placement and how much one loathes such cheap marketing ploys as seen in the movies (fortunately, there was plenty to admire on the stage and in the pit).

Updated to a constantly brightly-lit, nondescript room of a dilapidated Italian villa, the female characters were in casual dress and the men (in the beginning) in suits. Ferrando and Guglielmo then pretend go off to War dressed as UN peacekeepers (a contradiction there) and ‘return’ as heavily-tattooed hippies to try and seduce their fiancées, and so to test the girls’ fidelity. All at the behest of Don Alfonso.

So long as the production successfully shows how these two pairs of deluded lovers can be brought to their senses about love, and to appreciate the possibility of its duplicity, then we have a success. And this is what we have here, though one does feel that the story itself is cruel, especially to Fiordiligi, who tries so hard to resist. 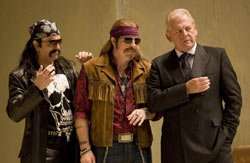 Throughout the performance one noticed that all of the singers’ diction was spot-on – an excellent cast has been assembled for this run of four performances. Pulling the strings of the characters is the central role of Don Alfonso, which had Thomas Allen reviving his portrayal from the original production and some of the revivals. As the years go by it is clear that he is growing more into this role than ever: his swaggers around the stage and his command of every nuance of the Don’s character are plain for all to see, from the knowing glances to the style of his voice: his short aria from Act One, ‘Vorrei dir, e cor non ho’, was delicious in its cruel deception of Fiordiligi, and had Allen hamming himself up wonderfully. This cheeky characterisation was brought out further when guiding the ‘foreign’ suitors of the ladies in the quartet of Act Two, ‘La mano a me date’.

Dorothea Röschmann’s Fiordiligi did not quite possess the range of coloration that this part requires. Her ‘Como scoglio’ was not as resolute as one would have liked though the higher register seemed more convincing. Later, though, her ‘Per pietà’ (Act Two) had plenty of characterisation when she realises that she might be falling in love for the Albanian stranger but the singing did not make this wholly convincing though it was very pleading. 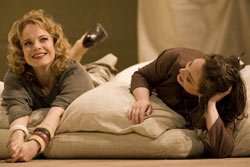 Fiordiligi and Dorabella are sisters, though this is not at all obvious from the production – they seem just to be good friends. The naïve Dorabella is sung by Elīna Garanča in her Royal Opera debut. The naivety comes across through the youthful way in which she flung herself through the performance. Her Act One aria was just justly hysterical (not in the funny sense).

Singing Guglielmo is the Italian Lorenzo Regazzo; his debut in this role. Throughout every word was relished. In particular, there was his fury at Ferrando for seducing his girl. Ferrando provided a sensuous voice to proceedings, with his serenade to true love in Act One particularly pleasing. The three-roles-in-one of Despina were each carried off ably by Rebecca Evans; the part of the notary had plenty of welcome humour injected in to it. As a support to Don Alfonso the interaction was just right.

The usually-reliable chorus was overpowering towards the end, and seemed out of place when considering the whole, and Colin Davis led the Orchestra without any hint of familiarity: phrases were treasured (this is sublime music), singers were looked after and there were moments of pathos, such as at the end of the opera. It is to Davis’s credit that the protracted ending of the opera did not in any way drag.