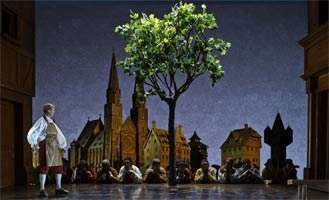 The Royal Opera’s three-year traversal of Richard Wagner’s operas as part of the 2013 celebrations for the composer’s bicentennial here reached what is the closest The Master came to writing a verisimo work, and leaves only Parsifal as well as Der Ring des Nibelungen to be performed as part of the celebrations – sadly, Rienzi, let alone Die Feen (The Fairies) or Das Liebesverbot (The Ban on Love), are unlikely to appear. As revived in Graham Vick’s “classic production” from 1993 this was a curate’s egg of a performance in many respects: it should have worked, but the individual parts made for a less than satisfying whole.

The designs of Richard Hudson are clear and suggest adequately the required locations – St Katherine’s Church for Act One, a street with houses for Act Two, and the Cobbler’s Workshop then outside Nuremberg for Act Three – but they are all too small-scale and lacking in a sense of humanity, and are sterile. Of all Wagner’s music dramas, Meistersinger relies on its population and Nuremberg itself, but the aura of both failed to materialise or interact deeply enough. When scanning the marvellous photographs of past, very realistic productions in the programme book, one can marvel at glorious evocations of community. Stripping away an opera’s baggage so that the singers can be focussed upon makes sense, but when dressed to the sixteenth-century hilt, replete with exaggerated cod-pieces that Henry VIII would be proud of, plain sets make little sense. The lighting, too, shows little imagination. 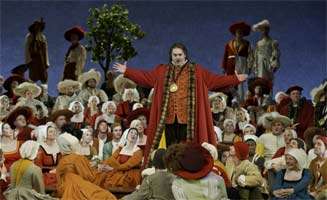 Wagner’s score is a huge challenge, and only in Acts Two and Three did the Orchestra of the Royal Opera House, really manage its demands. The opening Prelude occasionally tripped over itself, horns barely audible, and its grandeur was not forthcoming, nor its contrapuntal writing. Occasionally the singers were suitably supported, but too often the music-making was heavy-going in the opening Act. The playing was much more in sympathy with the characters’ situations in Act Two: driven as well as wholly supportive to Walther’s wooing of Eva. Act Three’s Prelude was gloriously and sensually played, with the remainder of the Act’s pulse kept vivid, the final scene’s processions-of-the-guilds especially so.

The casting mixes experienced Wagnerians with newcomers. The central figure of Hans Sachs, the wise, visionary cobbler, is sung by Wolfgang Koch, making his Royal Opera debut. His characterisation missed the essential qualities of philosopher and poet, and he was not helped by being seated during his ‘analysis of songs’ during Act Two: sedentary, his voice was constricted. There was not much sonority, and, where power was needed, he had a tendency to become inaudible. His final pean to German Art was suitably uplifting and noble, though, and was testament to his stamina. 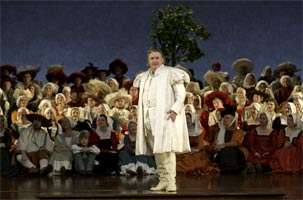 Simon O’Neill sang Walther (the passionate knight who learns the Art of Mastersinging from Sachs) with restrained heroism, yet was worryingly thin when in duet with the Eva of Emma Bell. He, too, was constricted by a lack of movement, unable to release his voice to full effect. His delivery of the ‘Prize Song’ was borderline. Bell, however, was often beautiful-sounding, shining thoroughly whether during a solo or when with others, brilliantly so during the Act Three quintet.

Very impressive as Sachs’s apprentice David was Toby Spence, whose clarion voice communicated his character’s youthful verve superbly. One of the few characterisations to really register in an authentic sense (the other being John Tomlinson’s Veit Pogner) Spence threw himself about without sacrificing vocal power. Tomlinson’s voice, while now lacking, was full of meaning and authority. Pogner’s glorious monologues were truly brought to life. The ridiculous figure of Sixtus Beckmesser (he sees himself as Eva’s suitor, if only he could produce the Master-Song) was captured with vitality by Peter Coleman-Wright. Robert Lloyd’s bass exuded authority as the Night Watchman

Whilst in full voice, the Chorus lacked clarity. A successful Meistersingers has to evoke the period and comradeship amongst the principals: Nuremberg’s population needs to live and breathe, whereas here they simply came and went. Still, to hear this glorious evocation of humanity is not to be missed.