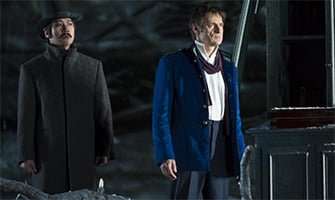 A year and a half into his tenure as Director of Opera at Covent Garden, Kasper Holten has scarcely put a foot wrong. He has overseen some artistic triumphs, navigated the company through a few treacherous waters and, by all accounts, taken assertive steps to refresh the experience by embracing new media, ditching poor productions and engaging more home-grown talent. Now that his feet are well and truly under the table he has decided to get back to the day job and has undertaken this new staging of Tchaikovsky’s best-loved opera. As with everything he does, he has taken a great deal of care over it. 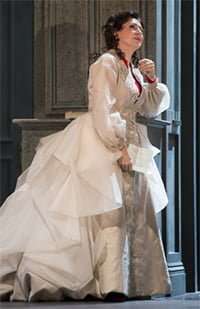 Unfortunately, while Holten’s Eugene Onegin has been meticulously thought out, it has not been thought through. The notion of framing Pushkin’s tale as a ‘memory play’ is hardly new – Daniel Slater did much the same only last year at Opera Holland Park – but the approach here, with Onegin and Tatyana’s youthful near-fling played out as a shared recollection of a distant past, is problematic. Tatyana’s ‘Letter Scene’ should tingle with nervous energy and youthful ardour, but it is doomed to stolidity when the singer and player are not one and the same. Krassimira Stoyanova, whose vocal beauty is apparent throughout, can do no more than watch her younger self wrestle with her adolescent emotions. Reduced to the status of an outsider, the Bulgarian soprano is scarcely more involved in her own story than one of those last-minute replacements who sing from the side of the stage while a victim of laryngitis acts the part in dumb-show.

Lensky’s death is rather better managed, with an older-and-wiser Onegin (Simon Keenlyside, rich in dramatic insights but a long way from his vocal best on this opening night) reaching out to embrace his old friend and tortured by the memory of the pointless duel they fought together. After that, thanks to the fact that the evening’s single interval had been inserted unconventionally between the fourth and fifth of Tchaikovsky’s ‘lyric scenes’, Lensky’s body remained motionless on the stage for the remainder of the opera – a staggering feat of pins-and-needles avoidance from Pavol Breslik, whose golden-toned performance as the tragic young man when alive had been both exquisite and heart-rending. It joined other detritus from the protagonists’ shared memory, such as Tatyana’s books and a broken chair, as constant imprints on Onegin and Tatyana’s minds. 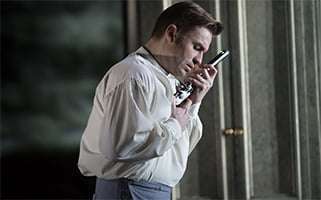 The deployment of dance and mime as windows on the past is effected without much consistency. One moment Keenlyside himself plays the youth, the next his younger self (Thom Rackett) takes over; likewise with Stoyanova and Vigdis Hentze Olsen. Mia Stensgaard’s stage designs set the opera resolutely in its intended period – one can almost smell the samovar –and have at their heart a rack of double doors, four in all, which clearly represent the gateways to memory. These close and re-open repeatedly to reveal changing vistas beyond. It is all extremely beautiful and presents an immediacy that Holten’s distanced staging lacks.

To accompany the visual experience, Robin Ticciati conducted a soufflé of a performance. He may have been mindful that the composer was a deep admirer of Mozart, for Tchaikovsky’s score can rarely have been infused with as much air as here, and the Royal Opera House Orchestra responded to the gifted young conductor (and Glyndebourne’s Music Director-designate) with attentive pliancy and a palette of the sweetest hues. The reading was all the more exciting for its delicacy. The Royal Opera Chorus was anything but fragile, though, and the stalwart choristers – expertly drilled as always by Renato Balsadonna – gave the lustiest possible account of their peasant song in scene one (during the course of which Tatyana’s remembered self ecstatically entwined herself with an idealised young Onegin).

Minor roles were taken with great character, from Christophe Mortagne’s barely-operatic Monsieur Triquet to Peter Rose’s forlorn yet dignified Prince Gremin, and there were especially treasurable cameos from Diana Montague (Madame Larina) and Kathleen Wilkinson (Filipyevna). From a purely musical standpoint, then, this was a fine, flowing performance of a red-blooded opera; but as drama it was just a little anaemic.