The Orchestra of the Royal Opera House
Sir Mark Elder 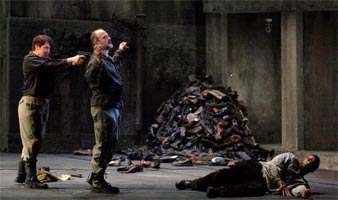 Like many operas that appear frequently, the continued success of “Fidelio” is something of a mystery. Its music is fine (in parts), but aspects of the story are incredibly contrived, even by operatic standards: a woman disguises herself as a manservant to rescue her illegally imprisoned husband. She succeeds, preventing his murder by the tyrannical prison governor, and her courage is praised. Great operatic territory, but it is the side-story of the gaoler’s daughter falling in love with Leonore (disguised as Fidelio) that is preposterous, and because of these two stories interweaving (principally in act one) Beethoven’s musical treatment is light then dark, almost schizophrenic. In a somewhat insecure performance of this Act, the music’s ideas consequently suffered, though matters did not get off to a great start with the Overture, which was surprisingly lax: its lighter moments never convinced, and its darker ideas never penetrated.

The idea of “Fidelio” is that Leonore, disguised as Fidelio, is a hero, a woman who wants to rescue her husband and expose the prisoners’ regime as being corrupt (sounds familiar!) though in Beethoven’s world there is a cop-out: the government minister Don Fernando is benign, and in a very unenlightened episode, the prison governor, the one person held responsible for what is wrong, is taken away whilst the gaoler Rocco gets away with his complicity (he was only following orders). Furthermore, Rocco’s praise of money in place of love (‘If you don’t have money too you cannot be really happy’) says a lot. It is these contradictions and confusions that hinder the message of “Fidelio”, and that require a more coherent staging than this one if they are to be communicated. 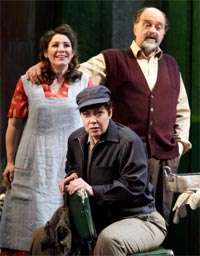 This production places the scenario in a run-down prison (possibly behind the Iron Curtain). As a setting, it should work well, but is hampered by unimaginative lighting. However, the first scene of Act Two is a triumph of staging: Florestan huddled in a corner, the room dimly lit and underground, a dangerous atmosphere, and with the long entrance down the back wall for Leonore, Rocco, and Pizzaro looking frighteningly ominous. The back wall of the cell was removed for the last scene, revealing the blue sky of freedom and Pizzaro’s prisoners all reunited with their wives and sweethearts: but to treat this scene like a final chorus to a Broadway musical undermines fatally its human and humane message of freedom and hope. Ultimately, one was not moved. 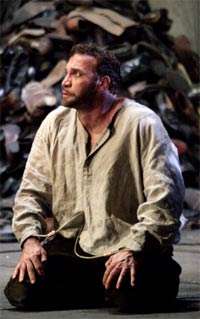 On paper the casting appeared strong. As Leonore, Nina Stemme did not act the part: there was little in the way of the essential qualities of vulnerability and courage. Her singing, too, was rather small, though she sang the notes securely and with conviction, and convinced in the tender moments. Endrik Wottrich started off well enough (he is in Act Two only): his opening aria (‘Gott! Welch’ Dunkel heir’ – God! What darkness here!) was desperately captured, and promised much. Throughout this grim scene, Florestan was in fighting form, despite his arduous existence. However, come the final scene, Wottrich’s voice had tired, and was devoid of heroism.

Kurt Rydl’s inviting bass was strong throughout, able to communicate his character’s confused ideas. Elizabeth Watts was impressive as Marzelline, Rocco’s daughter, and the girl in love with Fidelio. Come the opera’s close, she was heard strongly above Stemme. John Wegner’s Don Pizarro was all simmering violence, even sadistic. The man who would like to be Marzelline’s love is Jaquino, who was lightly sung by Steven Ebel. The cameo of Don Fernando was taken by Willard W. White, who was able to command gravitas, if not quite able to puncture through the roused chorus at the close.

Sir Mark Elder, stepping into the conducting breach at short notice due to an indisposed Kirill Petrenko, had the measure of the opera’s emotional core, and he was a superb accompanist to the singers, but the Act One’s lighter moments were longueurs. As with the staging, the playing in the first scene of Act Two was brooding, dark and foreboding: a well constructed and integrated orchestral performance. The men’s chorus for Act One was particularly fine – from hushed to blooming growth – but the whole chorus at the end was jolly instead of exultant. A clearer vision of this opera is required for this hymn to man’s free soul.