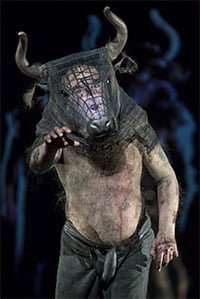 The monster may be fearsome but The Minotaur is not a score to be afraid of. Harrison Birtwistle’s compositional style of crunching, clashing sonorities runs untamed and free through the Greek myth in a way its eponymous half-man, half-bull creature can never do, trapped as he is within a Labyrinth and destined forever to dine on human flesh.

With batteries of percussion ranked antiphonally on either side of the stalls circle, the Orchestra of the Royal Opera House and Ryan Wigglesworth (making his House debut by deputising for the injured-for-rehearsals Antonio Pappano who had conducted the premiere in 2008) revelled in the music’s thrills and freewheeling ingenuity in this first revival of Stephen Langridge’s production, much to the delight of a packed and appreciative first-night audience. 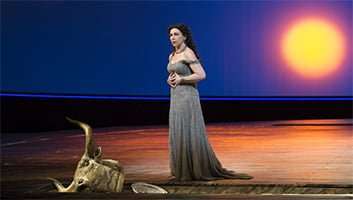 The cast, several of whom have returned to roles they played in that first run, was rock-solid. As Ariadne, the Minotaur’s morally and emotionally torn half-sibling, Christine Rice launched the opera with an imposing prologue that establishes mood and context much as Cassandre does in Berlioz’s Les Troyens. Throughout the two acts it was Rice’s sense of melodic and textural beauty that dominated the evening, and she was exceptional. Her voice inflected with tragedy, there were moments when she might even have sung the blues.

The singer cast as Theseus needs not only to be a powerful vocalist but physically he must be plausible as the conqueror of a man-bull. Johan Reuter is strong on both counts, and he made a heroic fist of a potentially pallid role. Alan Oke (in a part created by the late Philip Langridge) was an eloquent Hiereus, the acolyte who translates the exotic utterances of countertenor Andrew Watts’s oracular Snake Priestess in the opera’s weakest scene – an overwrought episode whose only message is that Theseus won’t get lost in the Labyrinth if he unravels a ball of red wool as he goes.

As Asterios, the Minotaur, Sir John Tomlinson returned to the role that was written for him, and he used the incipient ageing of his voice to infuse his interpretation with pathos and vulnerability. The great singer’s physical presence was as powerful as ever, his diction unparalleled and his identification with the character absolute, for all its darkness. Awake, the Minotaur was a roaring animal; in dreams he became an articulate man aware of his wretched state, and Tomlinson brilliantly fleshed out a creature wracked by suspicion and self-loathing.

Musically the opera is dazzling and should survive as one of the great modern scores. However, it is curious that Birtwistle allows his work, which is as organically wild and thrashing as one would expect, to be shackled in the cage of David Harsent’s monolithic libretto. As the text struggles to keep up with the composer’s imagination, theatrical development is sacrificed on the altar of poetic declamation (too often of the “breasts like hard apples” variety). Perhaps Birtwistle decided he needed a regular collaborator in order to keep his own flights of fancy in check; but he could have done so much more with someone who at least understood about dramatic pulse. The splendid Elizabeth Meister, who leads a thrilling pack of heart-munching Harpies, is saddled with pretty much the same text each time she appears, while the librettist’s wordy celebration of human viscera (“tripes and lights”) smacks of the synonym dictionary. There were times when it felt like ‘Thesaurus and the Minotaur’. 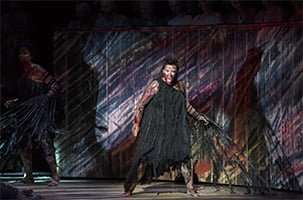 The Royal Opera has recently iterated its commitment to new writing both with this welcome Birtwistle revival, the UK première (in March) of George Benjamin’s Written on Skin and, indeed, right up to 2020. Given a tale as timeless as The Minotaur, presented in a staging as direct and unfussy as this (designed with spare beauty by Alison Chitty), it is a policy that deserves to succeed. With realistically-priced seats and a top cast of singers, for those who take the plunge, their sense of adventure will be richly rewarded.

The rousing curtain-call applause only subsided when the two Tonys – Pappano (Music Director) and Hall (the soon-to-depart Chief Executive) – presented a cake to John Tomlinson in honour of his thirty-five-year association with Royal Opera. As the great bass has appeared in no fewer than thirty-three of those seasons, it was an appropriate gesture that will no doubt have been washed down with a celebratory glass or two backstage. Bull’s Blood for Sir John, one imagines.