The Orchestra of the Royal Opera House
Christian Badea 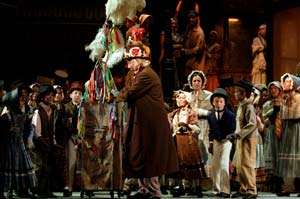 This glorious 1974 production of “La bohème” – receiving its 22nd revival – is, make no mistake, a cash cow for The Royal Opera, who can be milked ad infinitum and produce a full house. There is nothing wrong with this! There is a market, which also subsidises productions that might not attract such substantial audiences but that are, nevertheless, worthy artistically.

There are two “La bohème” operas. The other is by Puccini’s one-time friend Ruggero Leoncavallo. Purely by chance Puccini met his then-friend in a Milan café in March 1893. After the meeting they were life-long enemies! Leoncavallo had just written “I Pagliacci” and Puccini had “Manon Lescaut” under his belt. Puccini informed Leoncavallo that he was working on the opera that was to become “La bohème”. Puccini would have known that Leoncavallo was working on the same opera because the latter had offered him the libretto but Puccini had turned it down. “Let Leoncavallo write his opera, and I shall write mine. Then the public will decide.” 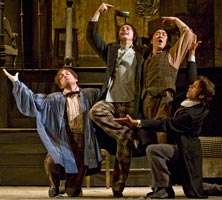 The story of four student friends trying desperately hard to get by in life whilst having fun is a tale familiar to many. To have this weighed down by the tragedy of one of them (Rodolfo, a poet) falling in love with a terminally-ill girl (Mimi) is the story-arc of the opera; any fun overshadowed by the unfolding heartbreak.

Hei-Kyung Hong was the advertised Mimì but Alexia Voulgaridou, who has sung the role at La Scala, stepped in and gave an affecting and vulnerable performance. Her voice took a while to warm but her performance became captivating. The initial meeting between Rodolfo and Mimì caught the mood perfectly, with both fumbling over each other shyly and with some embarrassment. Her response to Rodolfo clutching her “frozen little hand” was very tender. The final scene, with her dying on the bed, was very moving, heartbreaking indeed. 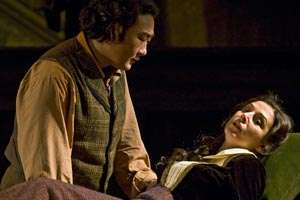 Wookyung Kim sang Mimì’s lover, Rodolfo. He had difficulty getting the words across but characterisation and tone were present; he dispatched ‘Che gelida manina’ with apt warmth. The aria serves to introduce Rodolfo to Mimì, and the playfulness in the seduction on the stairway bubbled with youthful ardour. What a great pity then that any sense of emotion was destroyed by thunderous applause, which deadened Voulgaridou’s ability to respond. It’s Rodolfo’s friends that first notice Mimi’s death-throes. They stare at Rodolfo and his subsequent screams of “Mimì … Mimì” as the curtain comes down would cause even the most cynical to share his sadness. 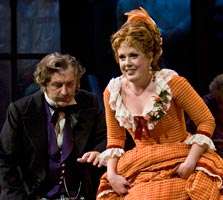 The other lovers are Marcello (a painter) and the faithless Musetta. From his opening contribution, Christopher Maltman showed off his strong, clean baritone. Anna Leese’s Musetta was a bustling, upright and strong interpretation. Her soprano carried inner strength and conviction that matched well her character’s determination to get what she wants. The contrasting pair of simultaneous duets at the end of Act III was superbly balanced. One has Marcello and Musetta ending their relationship with shouts of abuse and the other has Mimì and Rodolfo agreeing to part but only when winter is over.

Act Four finds the two men separated from, but still in love with, their girls. Musetta appears with the ill Mimì. The banter before this, with the four Bohemian men dancing so as to summon some high spirits said everything about their situation: superficially not much had changed from the previous Christmas Eve but then the lives of the two principal men had gone through much torture.These other two Bohemians are the philosopher Colline and the musician Schaunard. Colline’s philosophical aria in Act Four, in which he addresses his coat, had an unusual gravitas whereas 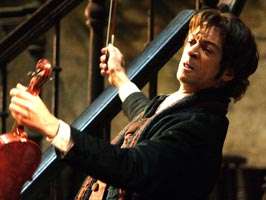 Williams’s Schaunard was the model of youthfulness. His carefree attitude was only checked by the profundity of the final scene.

Jeremy White’s Benoit (the landlord) was given the run-around when demanding rent – on Christmas Eve! – and he looked suitably confused. Similarly, Musetta’s rich conquest Alcindoro (Adrian Clarke) huffed and puffed after being left the restaurant bill.

The music-making was a mixed affair. Act One got off to a great start, with some chirpy and exciting sounds but Act Two (the Café Momus) suffered by being dragged out; it really needed to sound more vigorous, matching the bustling nature of the action in the opera. The remaining two acts, though, returned to good form. The playing supported the singing very well. In parts it was stirring and reminded that this is perhaps Puccini’s greatest achievement … well, excepting “La fanciulla del West”.

This production of “La bohème” is a feast for the eyes. First staged in 1974 by John Copley this latest revival works as well as ever. There is so much detail to enjoy, particularly the Café act where the passing military band, billiard game, toy-seller and waiters all have pertinent contributions. It reminds one that there is life beyond those of the principal characters. The Parisian toll-gate (Act Three), with snow falling, is gorgeous in conception, too. It will be a sad day when this production is retired: rumour has it that it only has one or two more outings left. Interestingly, the production seen in the House up to 1973 dated from 1899!

A postscript. When now entering the box-office area at The Royal Opera House a ghastly sight greets one: a bright, pixilated orange-lit display-board with a gyrating outline of a disco girl in mini-skirt and high boots. What has this got to do with opera or ballet? It’s awful!