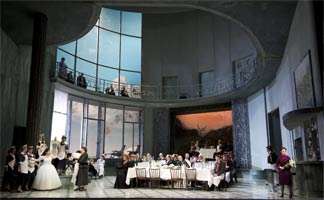 Just when you thought we were taking Ottocento composers such as Bellini seriously, along comes this revival of a misconceived production, first seen in Vienna in 2001 and at The Royal Opera the following year. Not only does it flout many of the composer’s and librettist’s intentions, it also necessitates a substantial musical cut. Apart from that (of which more later), musical values are high, although flaccid conducting by Daniel Oren makes much of the music seem droopier than it already is. The orchestral playing is excellent though, so too the contribution of the chorus.

As the somnambulist, Amina, the Cuban-American soprano Eglise Gutiérrez is superb. She has a lovely voice, a considerable technical command and the ability to knock off electrifying notes above the stave. She does not have a particularly distinctive timbre – she is a Carosio rather than a Galli-Curci, Dal Monte or Callas – but perhaps she will develop one. She was a little passive in Act One, not helped by the conductor, but she really came to light in the closing numbers of Act Two: ‘Ah! non credea mirarti’ was very touching and ‘Ah! non giunge’ suitably brilliant. 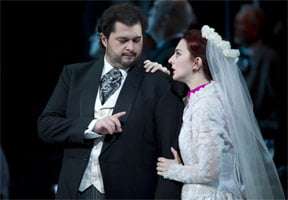 Elvino, one of the more obtuse characters among operatic tenor roles, is sung by the Spaniard Celso Albelo. He is the kind of tenor who is happier travelling in a straight line than negotiating a gruppetto, so a tenore di grazia he is not. His strengths are an appealing tone of almost lirico-spinto strength and an excellent higher register. Like so many Elvinos we have seen, he gets by. His acting is fairly perfunctory. 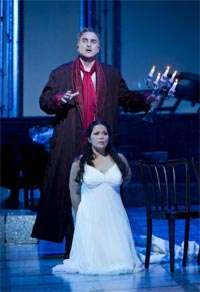 The Parmesan bass-baritone Michele Pertusi has long been a favourite. He has good Bellinian credentials, too – I recall being very impressed by him in I Puritani in Vienna. In William Tell at the BBC Proms this summer, he was not in his best voice, but here most of the warm tone was back and he was able to take the low option at the end of his aria. He also has the height, good looks and general stage presence to make Count Rodolfo a credible rival to Elvino.

Minor roles are well taken. Elena Xanthoudakis is a splendid Lisa, singing and acting the role to perfection. Jihoon Kim, who is in the Jette Parker Young Artists Programme, is clearly a Count Rodolfo in the making. Elizabeth Sikora is a sympathetic foster mother to Amina.

Alarm bells about the production start ringing before the tabs have even gone up: the offstage chorus and band are almost inaudible. The curtains finally rise on a Magic Mountain-style clinic, complete with singing nurses and waiters among the well-heeled patients. We are stuck with this scenery for the rest of the evening. Amina is in matronly black, wearing a pinny. Is she on the clinic staff? Why does she change into a wedding dress on the stage? Worrying about this sort of nonsense distracts one’s attention from the music. Elvino is first seen sitting at a piano, and having glanced at the producer’s note in the programme, we know that he is supposed to be a young composer recovering at the sanatorium from the death of his mother. 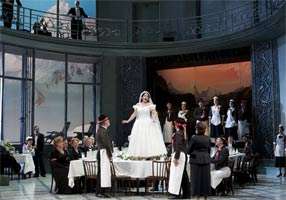 Well, I hate to have to point this out, but La sonnambula is a pastoral opera, albeit Swiss Alpine pastoral. Marco Arturo Marelli has to jettison its essential nature in order to shoehorn it into his Concept. When the Count first arrives from abroad and exclaims “The mill … the stream … the woods! And the farm nearby…”, the little elf working the surtitles cannily omits these inconvenient details to deny the audience the full story. The Count has no room for the sleepwalking Amina to bed down in, so she has to recline on the clinic floor, which looks like nursery linoleum. So why everyone thinks that she has been found in flagrante delicto, when she is not even in the Count’s room, I cannot say. At the start of Act Two she is still lying on the floor in her nightclothes, which the Amina of Bellini and Romani would never do.

The lovely first-rate music which ought to begin Act Two, some eight minutes, is jettisoned because having the chorus sing “Here the wood is thick and dark, let us rest here by the stream” would look silly in the context of the clinic. Yet the horn solo before Elvino’s Act Two entrance is clearly outdoor music Having the Count explain about somnambulists, to everyone else’s disbelief, works only if he is addressing a rustic audience. The sophisticated clinic patients would already know about such things. Amina has to make her perilous sleepwalk not along a mountain bridge but down conveniently upturned tables (which have presumably been cleared away while she was still prostrate on the clinic floor). Lisa’s shoe and stocking, which we have seen removed by the Count in the main clinic hall, are said to have been discovered by Teresa in his room. And so on, and so on…