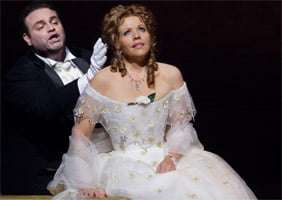 Sir Richard Eyre returned to direct this outing of his much-revived 1994 production of “La traviata”. This is the eleventh revival and it is back twice next season, once with the soprano who created the part of Violetta in this production, Angela Gheorghiu (Georg Solti conducted back then). On this occasion Renée Fleming made her much-anticipated London debut as Violetta. It is also reputed to be her final run in this role.This is a marvellous production. Sir Richard demonstrating an understanding for the audience that resulted in characters being able to inhabit their parts, being placed appropriately about the action and interacting with the staging in a suitable and believable way. This is not to say that avant-garde productions are verboten. On the contrary, there are countless examples of operas where transplanting the situation works wonders; Jonathan Miller’s production of “Rigoletto” for English National Opera springs immediately to mind, where the setting is in 1950s’ New York and the Duke is a mafia Don. 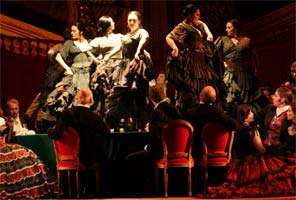 But, Sir Richard’s is a traditional staging, and is all the good for it. So, there was a sumptuous party for Act One, with everyone dressed in formal evening wear. The first scene of Act Two is Alfredo’s house (a grand drawing room, in need of some repair) and the second scene is a wonderful creation of a gambling den. The final Act is a run-down bedroom. All this adds to the story-telling.Expectations for Fleming’s Violetta were understandably high and were only partially met. There was lots of hesitation in her voice from the beginning and the coloratura demands of Act One were not wholly met, the disappointment being a lack of power, Fleming ‘holding back’ throughout most of the Act. Her voice even lacked beauty and, given that Violetta carries the whole opera, it was Fleming, rather than her character, that held court. 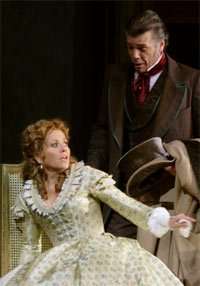 It was in Act Two that Fleming shone, with lyric beauty returning, finding a happy-medium between clean and bright sounds. It was the heavier moments that plumb despair that found her wanting. Her acting was fine and the moment of her collapse, when Alfredo curses her in the gambling room, was shocking. Act Three is mainly Violetta dying, and the lightness of Fleming’s voice matched the heroine’s frailty. Not a great Violetta!The star-turn was Thomas Hampson’s superb Giorgio Germont, Violetta’s would-be father-in-law. What a voice! His first appearance immediately signalled all the strengths required; he commanded attention and his presence was always the focal point. Later in the Act, where he asks his son to return, the sense of regret was palpably caught in his seductive baritone. Joseph Calleja’s Alfredo showcased a voice that had little difficulty in communicating emotion, though, as with Fleming, there was difficulty with ‘packing a punch’ as required. Of the minor parts, Sarah Pring’s Annina made a forceful and immediate impression. All but Calleja had excellent enunciation. Antonio Pappano led the ROH Orchestra and coaxed some wonderfully subtle playing in the tender moments; the Prelude to Act One touching on feelings of wasted lives and regret, ideas that permeate throughout the opera. Of the individual contributions was the gorgeous and captivating clarinet solo in Act Two that accompanies Violetta’s letter writing. Pappano brought a real bounce and Italianate revelry to the gambling scene and throughout gave drive to the action, allowing the music’s many and varied emotions plenty of expression, which supported the singing rather than competing with it. Pappano continues to demonstrate what a truly great opera conductor he is. The Chorus was in typically fine fettle.