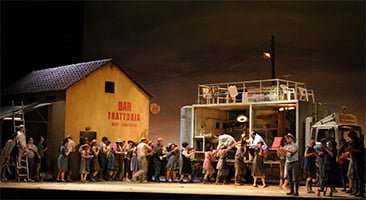 Laurent Pelly’s production of Donizetti’s charming, deftly plotted romance spreads itself a bit too wide for its own good. Back for its second revival at the Royal Opera House (which shares the staging with Paris Opera), its great strength are the set designs by Chantal Thomas – a fly-blown giant haystack, a road-side taverna, ragazzi buzzing around on Vespas and bikes, harvested fields stretching to the horizon isolating the village community – although the stormy sky is more in keeping with apocalypse than comedy.

The 1950s updating in a particularly dusty, sun-baked part of rural Italy has an affectionate Fellini-esque heightened reality that would have been just fine for this bittersweet opera, but Pelly brings it down to earth with some busy direction and plodding symbolism – the sort of micro-managed chorus familiar from many a West End musical, light-bulbs descending as Adina and Nemorino see the, er, light, the Jack Russell scooting back and forth across the stage, which all luxuriously dotted Is and crossed Ts with stagey emphasis, not quite trusting the sharp-edged story and Donizetti’s divinely apposite music to make their points. 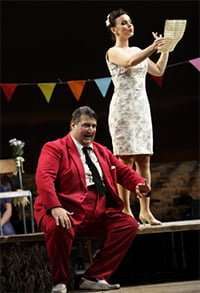 Also, I suppose we’re meant to infer that Adina is the boss when we first see her lolling among the hay bales and that, apart from any other considerations, Nemorino is her employee and socially beneath her, but this is rather glossed over, as is their will-they, won’t they romance. In the end this revival (directed by Daniel Dooner) reminded us that, however good and well observed it looks, it tends to soften edges, dissipate pathos, blunt the moments of surprising cruelty and avoid the crucial, cynical point that it’s money rather than any love potion that drives the plot. Bruno Campanella’s conducting tried to draw things more tightly together by pouncing on tempos, although he let Act Two relax and grow. The orchestral sound was a bit too solid, without that dizzy impulsiveness that can complement the zany plot so well. 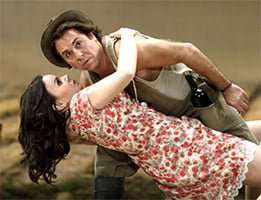 Aleksandra Kurzak (Adina in the first run in 2007) is directed to play the role rather like a tart, with lots of pouting and bosom-thrusting – Adina may know her worth, but surely not to this degree – but her singing was the highlight of the evening, with some much-needed warmth, sly wit and lyrical directness. Her climactic top notes crowning the big ensembles didn’t quite have the ping and openness I recall from earlier, but they were still formidable, as was the pin-point éclat of her flighty coloratura, and – where Pelly’s direction is spot-on – she was wonderfully torn and touching as she realises her true feelings for Nemorino.

As he approaches 50, Roberto Alagna is in terrific physical shape, even going momentarily shirtless in Act Two. His voice is expressive enough, but the sad truth is that the melting sweetness of his bel canto is now variable, as is the reliability of his top notes. He was fine in the opening cavatina ‘Quanto e bella’, but ‘Una furtiva lagrima’ (sung with Nemorino almost hidden from view by the hayrick) was dry, awkwardly modulated and unmoving. Then he was spectacularly back on form with a viscerally butch ‘Prendi, prendi’. As if to compensate, he overacted like mad, albeit with impressive athleticism, and you had to work hard to find Nemorino’s sweet, slow, love-struck, country-bumpkin soul.

You spend quite a while gazing at the drop curtain displaying the multi-faceted efficacy of Doctor Dulcamara’s elixir during the Act One scene-change, but it was worth the wait – and not just for Dulcamara‘s magnificently equipped mobile truck-shop. Ambrogio Maestri was brilliantly seedy as Dulcamara, his strong singing delivered with echt-Italian buffo delight, in his red suit cutting a compellingly venal figure and giving the big ensembles a good deal of tactful authority. Fabio Capitanucci was agreeably over-the-top as alpha-male love-muscle Belcore, but was unfortunately overshadowed by Alagna in their Act Two duet.