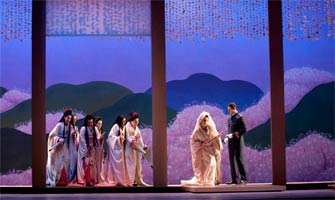 Moshe Leiser and Patrice Caurier were here on-hand to direct this fourth revival of their 2003 minimalist-Japanese Madama Butterfly, and that injunction fits well the Japanese aesthetic, with the directors allowing much time for the audience to ponder Cio-Cio-San’s dreadful tragedy rather than looking at a house packed full of irrelevant paraphernalia. Even though the action takes place within the same room, the sliding doors open out to reveal different backdrops whilst the effective lighting reflects moods. It’s a pity that the motors sliding the doors made such an intrusive noise.

The manners of the protagonists in Madama Butterfly are as important as the setting. The directors’ belief in the story, and their care in matching action with music is very satisfying: of course there is much sorrow, yet there is also comedy, as with the arrival of the pompous Prince Yamadori. The crassness of Pinkerton, and his youthful ignorance of Japanese culture, also made an impression. The handling of the child’s introduction is perfect, and shocking: to see innocence put in jeopardy by Pinkerton’s indiscretion and the naïve Butterfly’s expectations was upsetting. Also moving was Cio-Cio-San’s pained death (see the end of the video below), which had her flapping as a butterfly – a moving dénouement and a stroke of directorial genius, reflecting Cio-Cio-San’s being called Butterfly by Pinkerton in Act One: ‘they say that in other countries if a butterfly is caught by a man, she is transfixed with a pin and attached to a board’ – prophetic words indeed. 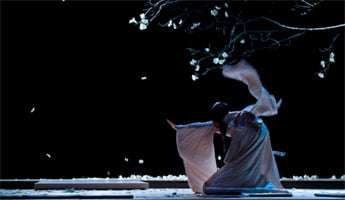 As happened with Aida in March, where an indisposed soprano was triumphantly replaced (Liudmyla Monastyrska for Micaela Carosi), Kristīne Opolais (Mrs Andris Nelsons), who replaced an ill Patricia Racette was from first note to last a quite outstanding Butterfly, one of the most taxing parts of the soprano repertory, where acting and singing must go hand-in-hand. In Act One her voice had the youthfulness required (Cio-Cio-San is but fifteen), whereas in Acts Two and Three (a few years later) – despite her abandoned status, she is hopeful and defiant – Opolais was in control, so much so that we believe she decides to commit seppuku. Whether that makes Cio-Cio-San a hero rather than a victim is debatable, but she certainly controls her destiny. This belief found perfect expression in ‘Un bel dì vedremo’ (One fine day), and her love-duet with Pinkerton was given with full expression. 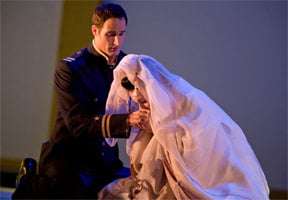 James Valenti, whilst not quite in possession of the lyrical voice required for Pinkerton, certainly had the manner and look of a dashing naval officer. His carefree attitude – Pinkerton is a thankless role, with spineless morals – riding roughshod over ancient Japanese rituals, fitted well his role. He took some time to warm-up but come the end of Act One his extended duet with Opolais was stirring, even if his voice cannot open-up for the ‘big’ moments. The role of the Consul Sharpless was ably and assertively sung by Anthony Michaels-Moore, and was especially touching during the letter-reading scene; his exasperation with Cio-Cio-San’s refusal to listen, and with Pinkerton’s abandonment of her, was made tangible.

Cio-Cio-San’s faithful servant was sung by Helene Schneiderman, whose strong mezzo came across as a perfect complement to Opolais. Jeremy White, as usual, made a bumbling Bonze convincing, and ZhengZhong Zhou made Prince Yamadori the ridiculous and out-dated creation that he is. The Marriage Broker of Goro was somewhat underplayed by Robin Leggate – though forcefully sung – although he was rightly in the background, attempting to pull the strings in malicious fashion.

Andris Nelsons relishes this wonderful score, and the ROH Orchestra was on tremendous form: the opening was fresh, original and urgent, and the frequent pulling of heart-strings elsewhere really meant something. He navigated the music’s shifts in mood – grandiose, subtle, Japanese, American – with aplomb, and was a superb partner for the singers.

A video of The Royal Opera’s Madama Butterfly: