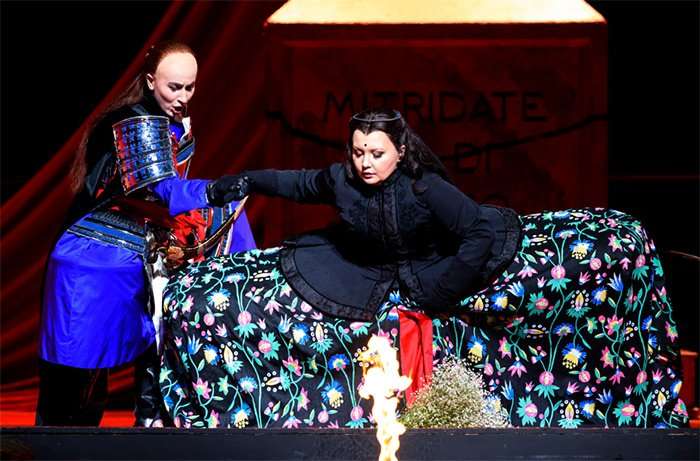 Although now twenty-six years old, Graham Vick’s production of Mitridate, Mozart’s early operatic achievement (he was fourteen when he composed it), has retained a solid foothold in the repertoire at Covent Garden – this is its third revival since it was first mounted as a contribution to the composer’s bicentenary commemorations in 1991. It receives renewed vigour and animation now due in no small part to the excellent singers, compelling and distinctive, who clearly believe in this opera seria as a viable stage-work, just as audiences have also increasingly come to appreciate over the last few decades with similar operas from the eighteenth-century.

Mozart’s youthful genius succeeded in creating varied and emotionally charged – as well as strikingly virtuosic – music for the characters, despite the stilted form of the genre handed down to him (Gluck was still only in the middle of his series of ‘reform’ operas at the time). The musical parts mainly inhabit the soprano range – Mitridate’s two sons and the governor of Nymphaeum, Arbate, having been created by castratos. Albina Shagimuratova and Lucy Crowe, taking the two female characters at the centre of the conflicted love interests among Mitridate and his sons, offered the vocal high-points of this first-night performance. 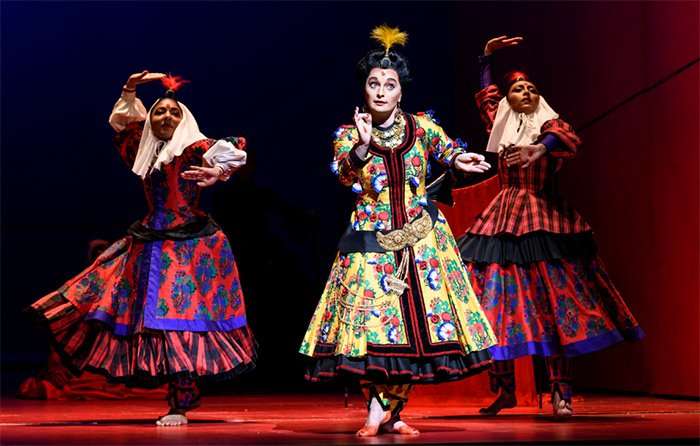 Shagimuratova has been gaining considerable acclaim, not least through her appearance at the Proms last year in Rossini’s Semiramide. Here she brought weight and sensitivity – rather than flashy vocal pyrotechnics per se – imparting to Aspasia a dignity and prominence that look ahead to the Countess or Fiordiligi: her heartfelt aria ‘Nel grave tormento’ would not have been out of place in Cosi fan tutte as a substitute for ‘Per pieta’. There was grace as well as precision in Crowe’s singing, not only in her written-out music, but also in her agile, stratospheric cadenzas.

Bejun Mehta was the more interesting, musically speaking, of Mitridate’s sons, filling the Royal Opera House with his expressive, coloured, countertenor. Salome Jicia’s Sifare was lithe and efficient, though she made heavy weather of some of her cadenzas. Presiding over the romantic and political machinations of these characters, Michael Spyres in the title-role sang with agility across the full range of Mozart’s writing, if perhaps a little thin in the higher stretch.

Slightly over a quarter of a century on, Vick’s production seems to respond less astutely to the form of Mozart’s work. It takes inspiration from Baroque and Oriental theatre with the grand, stylised gestures of its characters – often holding arms and hands aloft, imperiously or magnanimously, threateningly, in supplicatory demeanour, or just in ironic jest. But it quickly looks like caricature, all the more so as the frequent choreographed steps of the extras tend to give it the appearance of a ballet that just also happens to be sung. 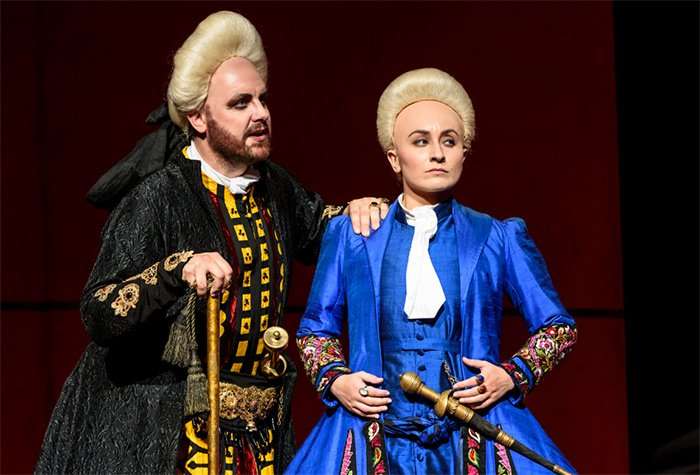 One could see it favourably, perhaps, as foreshadowing Barry Kosky’s “extravagant minimalism” – lavish, colourful costumes (the large hooped, crinoline skirts and dress of all the named characters easily constitute this production’s most inventive and memorable feature) along with energetic dancing and movement within the parameters of a fairly bare set – but with the difference that Vick’s realisation becomes a somewhat sterile end in itself rather than co-existing with the drama in fruitful symbiosis. A line of influence can be traced from its stylised gesture to the work of subsequent directors, such as John Ramster’s recent production of Handel’s Radamisto for the Guildhall School, but there the irony was consciously and more honestly in-built by the directorial concept of placing it as the centrepiece of a deliberately historicised staging, put on for the entertainment of a group of contemporary diplomats. Vick’s vision – not bad in itself, even fresh and imaginative in the early-1990s, and although finely executed here – fails to reach beyond itself in order to provide any meaningful idea about, or insight into, the drama.

Making his debut at Covent Garden, Christophe Rousset conducted the Royal Opera House Orchestra (from the harpsichord) in a generally dutiful and solidly forthright account of the score, rather than one with more of the vitality and bite one might otherwise encounter in such repertoire which is now more usually left with ensembles specialising in historically informed practice. Naturally that has to do with the larger orchestra and its modern instruments at Rousset’s disposal, creating a richer, tawnier palette, and sounding more like Leopold Hager’s older recording than his own with Les Talens Lyriques. That revealed more clearly the ways in which the young Mozart already looks ahead to breaking the bounds of opera seria through the greater, fluid expressivity of his subsequent musical dramas. If for no other reason, that makes it worth grasping the rare opportunity to see Mitridate staged, though the entertainment afforded by this production’s vivid spectacle may be excuse enough.