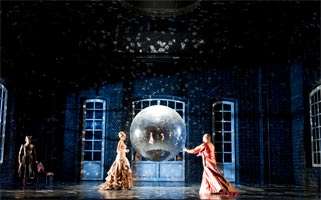 As a composer, Agostino Steffani (1653-1728), who was also a diplomat and churchman, bridged the gap from Monteverdi and Cavalli to Handel, a span of about half a century, from where not much opera is currently performed. Today he is remembered for his chamber duets, which had a strong influence on Handel. A few years ago, Thomas Hengelbrock ‘rediscovered’ Steffani’s last opera “Niobe, Regina di Tebe” and had it staged at the Schwetzingen Festival in 2008. It is more-or-less this production that came to Covent Garden, with Hengelbrock’s specialist Balthasar Neumann Ensemble. There was a previous revival, in August 1977 at Teatro Accademico Castelfranco Veneto and the following November in Alice Tully Hall in New York City, so there seems a lot of fuss about a so-called rediscovery.

The opera’s 1688 premiere, which was for the opening of the remodeled Munich Hoftheatre, must have been quite something: the work calls for thunderbolts, earthquakes, transformations, and dragons, all to show-off the theatre’s stage machinery. This production is similarly full of effects: fire, clouds, evocative lighting, all within the confines of an exterior of a grand house. Having said that, the opera itself is dull, with the story going nowhere, and being so very emotionally shallow. Often the singing was beautiful, and the funny moments were successfully conveyed, but the supposedly chilling or frightening aspects were unexciting, and overall there was a lack of emotional clout: more a criticism of the opera rather than the performance. 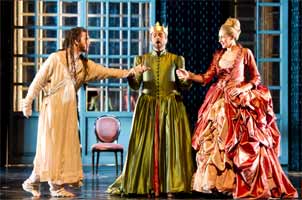 The cast is universally strong, led by ‘male soprano’ Jacek Laszczkowski as Anfione, King of Thebes. Countertenor Iestyn Davis sings Creonte, and both sang securely and invested their words with colour: a rare gift for voice-types such as these. Alistair Miles’s Poliferno, who with Creonte provide some comic relief as a bumbling pair, was notable for the occasional biting viciousness – delightful – and the eponymous queen was sung by Véronique Gens with imperious conviction.

The orchestration is rich, the Balthasar Neumann Ensemble an expert exponent of the required idiom. There was much to enjoy in the scoring: a meaty overture (it would make a great wedding march), some jazzy percussion, vibrant flutes, and even a bassoon, along with the usual ‘period’ instruments one would expect. The extensive continuo section never sapped momentum from the drama. On the whole, it is a curious relic of an opera, with a successful staging – barring some stupidity such as chairs being thrown about, and some weird and wholly unnecessary dancing – something worth catching as it is unlikely to come back.