The Orchestra of the Royal Opera House
Daniel Oren 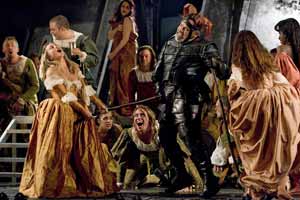 Returning for its fourth revival David McVicar’s direction of “Rigoletto” is looking and feeling sprightly as though forged anew. Its last outing a few years ago suggested that its time was coming to an end. In fact there seems many more miles left.

Michael Vale’s single-unit set rotates to reveal settings for the different scenes. The opening is clever: angled, the perspective affords a view of a house-façade but upon a 90o rotation the building is lop-sided and unnatural. The idea of contradiction within individuals and the presentation of two contrasting faces is what “Rigoletto” is all about.

The Duke professes eternal love to Gilda and yet has no problem in having his way with the assassin’s daughter, Maddalena. Gilda herself is most certainly not an angelic victim of events – she forgives her seducer and thereby condones his sin. She also is a girl who has a man in her house, against the explicit instructions of her father. Even the ‘professional assassin’ betrays his client’s trust. 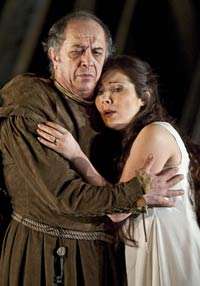 Leo Nucci gave a towering and moving account of Rigoletto. Hunched and limping, he threw himself into the part and mined all its possibilities to perfection – joker, provocateur, doting father and figure of tragedy – producing an entirely human portrayal. The tragedy of Rigoletto is that all he wants to do is protect his daughter; yet it’s his actions that drive her to her death.

What a moving soliloquy ‘Pari siamo’ (We are alike) became. Drawing parallels between his life as a jester and that of an assassin (Rigoletto’s weapon is his tongue), Nucci gave a tantalising glimpse into the heart of Rigoletto’s vulnerabilities and inner demons. Nucci’s malleable and rich baritone produced the visceral timbre for anger and also extreme tenderness – all in this great aria.

Rigoletto’s indefatigability in the face of the courtiers who have abducted his daughter – thinking her his lover – was movingly captured in ‘Cortigiani, vil razza dannat’ (You courtiers, vile accursed race). Begging for his ‘impagabil tesor’ (pearl beyond all price) to be returned he was truly pathetic in being able to summon some defiance. This is a great account of this great role.

Rigoletto’s daughter, Gilda, was somewhat-ably captured by Ekaterina Siurina – when we first meet her she is wilfully disobeying her father to see a man. Timid at first, Siurina grew during the evening to convince. With ‘Arrossir voglio innanzi a voi soltanto’ (Before you alone I can tell my shame) she tells everything to her father, restoring faith in their relationship when she is rescued by Rigoletto from the crowd. This was an incredibly moving encounter. There is bite to Siurina’s soprano – but it is also from the heart and seductive. 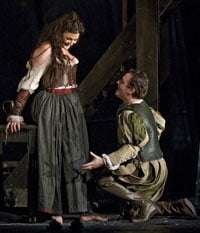 Gilda’s love interest, the Duke, provided a stunning House debut for Francesco Meli. He brought passion, range and a glorious line to his singing. His completion of Glda’s sentence with ‘T’amo’, where she is reflecting on her feelings – ‘E l’alma in estasi gli dice: t’a…’ (And my heart in ecstasy cries, I lo…) quickened the heart and his reflections on his earthly passions – ‘Ora che accendene un fuoco istesso!’ (Now that such a fire is lit within us!) ably captured their youthful, futile love.

The Duke’s true feelings come out later in ‘La donna è mobile…’ (Women are wayward) – he does not believe in a woman’s pledged fidelity, so, one supposes, he sees no harm in himself being unfaithful. There was a viciousness and care-free attitude given to this famous aria that made his own defiance more compelling; this Duke means to get what he wants. 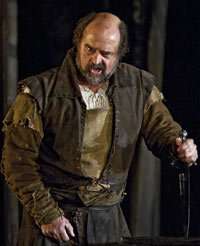 It was a luxury indeed to have Kurt Rydl as the assassin Sparafucile. His bass is as black as the depths of space, and he was on amazingly good form. His dialogue with Rigoletto when discussing prices for killing found both very well matched. The treachery he performs had the requisite regretful resignation.

Under Daniel Oren’s conducting the ROH Orchestra was on a tight leash. Act One was almost subdued but this helped enormously to heighten the tension. There was some gorgeous playing, especially from the woodwinds. The payment-of-the-assassin scene was especially taut and the fluttering flute that acts as a premonition to the thunder danced wonderfully. Those laden strings accompanying Maddalena’s confession of love for her new-found Apollo (the Duke) were full of tragedy and foreboding. The restraint of the orchestra really allowed the calamitous moments to shine. This was Oren’s great achievement to complete a memorable night.