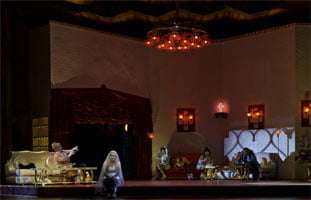 Advance publicity illustrated The Royal Opera’s newly-imported Rusalka with a vivid photograph from the production’s first incarnation at the 2008 Salzburg Festival. It evoked a run-down brothel rather than the mermaid lagoon of Dvořák’s imagining; and, unsurprisingly, that is what this revival gives us. So why did factions in the audience feel the need to boo when the creative team took its bows? They must have known what the medicine was before they chose to take it. I guess some people like to pay to jeer. Not that Jossi Wieler and Sergio Morabito’s Euro-chic production deserves many plaudits; I did my best to engage with its tics and quirks for about an hour, but by Act Two, around the time a giant cat made its appearance, I concluded that it was all a bit silly and resolved to focus my attention on the music. After that I had a marvellous evening.

Yannick Nézet-Séguin’s Covent Garden debut is sensational. If only I could find a less hackneyed adjective to describe the symphonic sweep with which he conducts Dvořák’s luscious score, or to celebrate the sheer rightness of the sound he conjures from the pit, but I can’t. To risk another cliché, the members of the orchestra play like angels. And what extraordinary music it is. There is far more to this opera than just ‘Song to the Moon’; Rusalka offers three hours of Dvořák at his most romantic, lyrical and inspired. It defies belief that this is the first time it has been programmed by The Royal Opera. 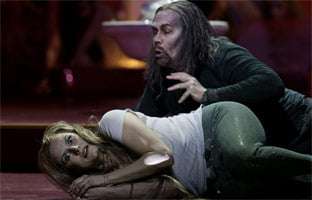 Camilla Nylund is also making her first appearance for the company: she reprises the title role from the Salzburg production and tears the heart and soul out of it, often singing through some improbable gymnastics (courtesy of Altea Garrido) and usually within a less-than-dignified visual context. She is partnered in her thrilling performance by New York Met stalwart Alan Held as Vodník the Water Goblin (a kind of Wotan to Rusalka’s Brünnhilde), and Bryan Hymel as her beloved – named simply, in true fairy-tale parlance, as the Prince. Hymel’s role is surprisingly intense: it is practically Heldentenor material in places and he seems not ideally cast for such a role at this point of his career. Nevertheless, he overcame a shaky patch midway through the performance to ring out with shining power during the closing scene.

Agnes Zwierko and the great Petra Lang were a formidable pair of harridans, respectively playing the witch Ježibaba and the Foreign Princess who turns the Prince’s head. Zwierko in particular had a lot of fun attempting to debag Ilse Eerens’s Kitchen Boy (and, as the latter is a trouser role, there was a moment when one half-expected a prosthetic add-on to rear its ugly head; from these directors I wouldn’t have been surprised). A massive nod of approval, too, for three game Jette Parker Young Artists – Anna Devin, Madeleine Pierard and Justina Gringyte – a trio of Wood Nymphs who not only sang splendidly but also had their work cut out humouring various directorial demands that ranged from prance-dancing like Isadora Duncan to tottering around on impossibly-high stiletto heels.

Barbara Ehnes provides garish designs that revolve and sway beneath a canopy of wood-effect laminate, and within this setting there are a number of tiresome props. To show what Dvořák and his librettist really meant by Rusalka’s lack of a human soul – no spirit, no sexuality – there are Christian artefacts and intimations of copulation at every turn. A replica of Copenhagen’s Little Mermaid statue (complete with halo) was bound to end up shattered: the directors’ banal notions of symbolism would demand nothing less. I mentioned a feline character earlier: in fact no fewer than three moggies make an appearance, one of them real. The music-making is real, too, and as irresistible as catnip. Treat yourself to a seat – restricted view if you like – and you’ll purr with pleasure.