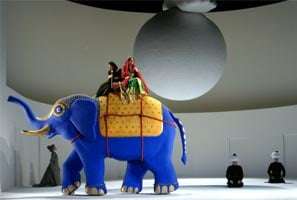 “Tamerlano” has come home to London in a production in which much has been invested in terms of musical expression and theatrical inventiveness. Its biggest drawing card was missing, however. Plácido Domingo had had to withdraw to undergo “preventive surgery”. At the eleventh hour of his career Domingo has turned to Handel, finding for his debut a role which he can convincingly interpret as a senior citizen. Such is the authority which he brings to a production that his absence may have exaggerated faults in this opening night.

Issues over the choice of edition to perform are endemic to Handel’s operas, indeed to all works of the period in which composition was seen as the fruit of collaboration between a fertile composer and hugely gifted singers. In the case of “Tamerlano” the intervention of the tenor Borosini was more creatively productive than the normal pressure to provide a vehicle for the singer’s particular skills. The tenor brought with him to London the setting by Gasparini of Haym’s libretto, along with representations to Handel to incorporate some elements of it into the already completed work. So the performing edition of October 1724 differed significantly from the score finished in July, with the dramatic momentum having been tightened by the omission of certain music, particularly in the final Act. The restoration of this music at Covent Garden makes for a very long evening in the theatre. Not only does the addition of Asteria’s ‘Padre amato’ and the duet for Andronico and Tamerlano prolong the evening but the latter at least is dully conventional by comparison with the extraordinarily free invention with which Handel sets Bajazet’s death through poisoning, worthy of ranking alongside the achievements of any of the great operatic innovators such as Gluck and Berlioz. Handel’s final concept of the conclusion to the opera was to proceed swiftly to the final chorus. Treating the score of the October premiere as the Ur-text seems the most musicologically sound solution, as well as the most practical, Admittedly there is an anomaly if the barer version is used, that Asteria is present but does not contribute to the final chorus. 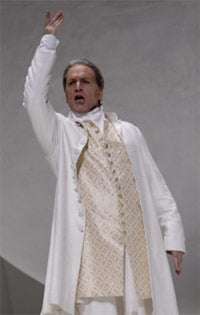 The media lost an operatic news event with the withdrawal of Domingo but there was a musical gain in the substitution of Kurt Streit (who was due to sing two performances anyway). Domingo can be heard in the Madrid incarnation of this production which has also found its way onto DVD. From that it is clear that he is no longer equipped to produce the smooth line predicated by Handel’s writing in Bajazet’s arias. Streit, in his vocal prime and with experience in Mozart roles, handled the divisions with appropriate flexibility, though his tone was not short of steel. Dramatically Domingo’s grizzled Lear-like tragic impotent monarch was replaced with a still resolute warrior, not short of stamina.

The rest of the vocal team were vocally uneven on opening night. Not every singer had the measure of the house and a lack of experience showed among some of the debutantes. Christine Schäfer is an artist I have admired in the recital room, where in predominantly pure and slender tone she can project meaning without pressure. In this large auditorium her tone tended to become lumpy, with the need to press in forceful phrases around the top of the stave leading to some ugly yelps. Christianne Stotijn came adorned with a considerable reputation but the middle of her voice seemed pallid and she had too readily recourse to a harsh chest register to make her effects. The house may have simply been too big for these two artists. Ironically, in a Royal Philharmonic Society lecture he gave in 2003, Graham Vick expressed serious misgivings about performing baroque opera in nineteenth-century opera houses. Has he changed his mind? Perhaps first thoughts are best.

Ivor Bolton’s introductions to the arias regularly gave promise of something sturdier and forthright than the singers went on to deliver. The playing of the Orchestra of the Age of Enlightenment was tireless, ever willing to respond to each fresh challenge in this multi-hued score. The continuo group carries an unusually heavy weight of the action in this opera of lengthy and pungent recitative passages. The theorbo justified its participation in the recitatives with some ebullient playing.

The most assured performer of the central quartet was Sara Mingardo, an early-music specialist who had sung the role of Andronico in Madrid. Her contralto has a consistently hardwood quality which exudes authority and in this production enabled her to be periodically the master of ceremonies; at the same time her identification with Andronico on a human level was utterly sincere. His opening aria ‘Bella Asteria’, delivered from the stage apron, alternated between gushing passion and melting tenderness. 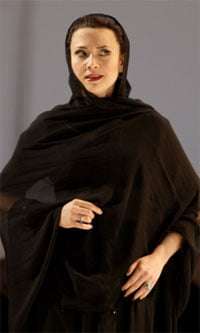 The part of Irene benefited from a singer with a higher centre of vocal gravity than the contralto for whom Handel rewrote the music for the October 1724 première. Indeed Renata Pokupič’s assumption of the part from the moment of her entry atop a vertiginous royal blue elephant was one of the evening’s most rewarding elements. Musically assured, she expanded the character’s importance in the network of intrigues in her disguise as servant girl and her dignity in propria persona. The other minor character, Leone, was strongly cast in the shape of Italian bass Vito Priante, who was allotted the Act Two aria ‘Amor da guerra e pace’ and sounded as if he could have successfully tackled Handel’s interpolation for Montagnana in the 1731 revival; even the most demanding baroque music holds little fear for the singers of today.

Without a consistently first-class cast, this reappearance in London of “Tamerlano” is likely to be remembered above all for the production. Director, designer and choreographer quite clearly have a united vision of the work and the contribution of each enhances the effectiveness of the others. Richard Hudson’s monochrome designs are largely abstract, certainly practical and sometimes hauntingly powerful. The action takes place in a kind of courtyard bordered at the rear by a curved rampart with openings at ground level. A large globe pressed down by a plaster foot dominates the centre of the stage: a symbol of human authority or supernatural power? At curtain rise the defeated Bajazet has to drag himself out from underneath it. Later he raises it to release Asteria, only for his despondency at the events of Act Two to send him back under its control. Even if the ball itself is not in direct contact with the characters, its shadow exerts an influence: In Act One Asteria finds herself trapped within its confines as the stage-revolve turns with her remorselessly under its gravitational pull. Those shadows were the product of Matthew Richardson’s impeccably managed lighting plot, also notable for some deftly created silhouettes. The same revolve takes Asteria and Andronico apart to heart-breaking effect in their Act Three duet.

The sets are peopled with a large group of costumed supernumeraries. The actors (so they are entitled in the programme) spend their time partly on the curved walkway, where they provide background to the conduct of the principals, and partly on the stage floor, where they are more explicitly engaged in the action. During Andronico’s ‘search’ aria in Act Two they grope blindly along the walkway. The extras are finely drilled by choreographer Ron Howell, their communal movements impressively synchronised.

Sometimes things are taken too far. It was helpful for the supers to abject themselves during Bajazet’s first aria to symbolise his humiliation but did they need to roll over into a different position for the three distinct sections of the piece? The choreographed accompaniment to Leone’s aria, with its rolling and unrolling of cloths and intermittent acts of violence, was way over the top.

The characters were sharply drawn. Bajazet, dressed in an unchanging white frock-coat, was played rigidly straight, his single-mindedness bordering on fanaticism. Tamerlano was no died-in-the-wool tyrant but a comic figure. He underwent three changes of costume, black for Act One, brilliant green for Act Two until he changed to crimson for the throne-room scene, then a robe with a lengthy and imperious train for the last Act. He flounced flamboyantly around the stage like an opera queen. His first aria ‘Vo’dar pace a un alma altiera’ was a camp creation, performed with repeated reversion to a fencing pose and with shoes clacking loudly on the stage floor. 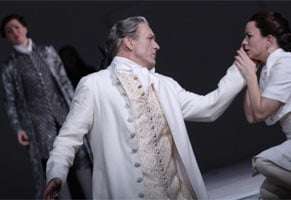 Asteria was of South Asian culture in costume, gesture and reverential demeanour. Andronico was identically costumed at each appearance, reflecting the character’s steadfastness and transparency. He was sometimes given charge of the performance, flicking his fingers to spark frozen extras into motion. Mostly he seemed to be a caricature of an opera singer, using stock romantic gestures, arms spread wide, the right-hand outstretched in supplication. Class distinctions were visibly underlined: the servants went barefoot, as did Asteria. Taking their cue from the modes of address in the libretto, the aristocrats treated each other with formal politeness and courtly gestures.

Vick’s productions are full of incident; there is always something to intrigue the eye, or to distract the attention. One finds oneself constantly second-guessing the director. The slow-motion activity on the rampart often seemed to be an accompaniment to the core action. The supers covered their ears so as not to overhear the exchanges between the main characters or formed a chain in the manner of blind leading blind. A string of miniature toy elephants moved slowly along: Irene’s caravan was approaching.

The most memorable moment of Vick’s direction is his handling of Tamerlano’s aria at the opening of Act Two, in which the king predicts how the glory of his and Asteria’s coronation will excel any competing ceremony, with changes of pitch, instrumental interventions and rhythmic gestures given physical enactment, which the listening Andronico finds himself eventually having to imitate; great imagination laced with irony. But perhaps the most important effect of all this stage-business was to accentuate the rare moments when a character was left alone to deliver an aria in solitary isolation, such as Asteria’s ‘Cor di padre’.

The members of the cast may settle in vocally, taking inspiration from their conductor. Perhaps there is still some hope of seeing Domingo in this opera; if so, despite the ROH-management’s ensuring punctual interval timings the revival would be better judiciously shortened.