Skip to content
LnRiLWNvbnRhaW5lcltkYXRhLXRvb2xzZXQtYmxvY2tzLWNvbnRhaW5lcj0iNmIzNDMzNmNmZTc3NWZiNGJlMTVjMmIwMzU3NWM1MjYiXSB7IHBhZGRpbmc6IDI1cHg7Ym94LXNoYWRvdzogNXB4IDVweCAxMHB4IDAgcmdiYSggMCwgMCwgMCwgMC41ICk7Ym9yZGVyOiAycHggZG90dGVkIHJnYmEoIDEwOSwgMTA4LCAxMDgsIDEgKTsgfSAudGItZmllbGRbZGF0YS10b29sc2V0LWJsb2Nrcy1maWVsZD0iODM3Y2ExZjc0MGRjZDdkOTdlMzQzOWMyYjIwMWZmZTMiXSB7IGJhY2tncm91bmQtY29sb3I6IHJnYmEoIDIzOCwgMjM4LCAyMzgsIDEgKTtwYWRkaW5nLXRvcDogMTBweDtwYWRkaW5nLWJvdHRvbTogMTBweDtwYWRkaW5nLWxlZnQ6IDEwcHg7IH0g
LnRiLWNvbnRhaW5lcltkYXRhLXRvb2xzZXQtYmxvY2tzLWNvbnRhaW5lcj0iNmIzNDMzNmNmZTc3NWZiNGJlMTVjMmIwMzU3NWM1MjYiXSB7IHBhZGRpbmc6IDI1cHg7Ym94LXNoYWRvdzogNXB4IDVweCAxMHB4IDAgcmdiYSggMCwgMCwgMCwgMC41ICk7Ym9yZGVyOiAycHggZG90dGVkIHJnYmEoIDEwOSwgMTA4LCAxMDgsIDEgKTsgfSAudGItZmllbGRbZGF0YS10b29sc2V0LWJsb2Nrcy1maWVsZD0iODM3Y2ExZjc0MGRjZDdkOTdlMzQzOWMyYjIwMWZmZTMiXSB7IGJhY2tncm91bmQtY29sb3I6IHJnYmEoIDIzOCwgMjM4LCAyMzgsIDEgKTtwYWRkaW5nLXRvcDogMTBweDtwYWRkaW5nLWJvdHRvbTogMTBweDtwYWRkaW5nLWxlZnQ6IDEwcHg7IH0g
Wagner
Tannhäuser – Grosse Romantische Oper in three acts to a libretto by the composer [1875 version – the Paris score with interpolations from the Dresden edition; sung in German with English surtitles]
LnRiLWNvbnRhaW5lcltkYXRhLXRvb2xzZXQtYmxvY2tzLWNvbnRhaW5lcj0iNmIzNDMzNmNmZTc3NWZiNGJlMTVjMmIwMzU3NWM1MjYiXSB7IHBhZGRpbmc6IDI1cHg7Ym94LXNoYWRvdzogNXB4IDVweCAxMHB4IDAgcmdiYSggMCwgMCwgMCwgMC41ICk7Ym9yZGVyOiAycHggZG90dGVkIHJnYmEoIDEwOSwgMTA4LCAxMDgsIDEgKTsgfSAudGItZmllbGRbZGF0YS10b29sc2V0LWJsb2Nrcy1maWVsZD0iODM3Y2ExZjc0MGRjZDdkOTdlMzQzOWMyYjIwMWZmZTMiXSB7IGJhY2tncm91bmQtY29sb3I6IHJnYmEoIDIzOCwgMjM4LCAyMzgsIDEgKTtwYWRkaW5nLXRvcDogMTBweDtwYWRkaW5nLWJvdHRvbTogMTBweDtwYWRkaW5nLWxlZnQ6IDEwcHg7IH0g 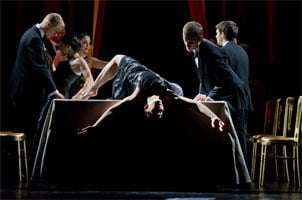 So much hangs on a proscenium arch. The velvet drapes beckon us in with the promise of unseen delights, yet the solid frame keeps us firmly outside. “Crime scene – do not cross”, it shouts. As director Tim Albery contemplated the feast of crimson that adorns the Royal Opera stage, such a paradox may well have kindled his ideas for this new production of “Tannhäuser”. For Albery’s Venusberg – the lair of the goddess – lies behind an exact replica of that same curtain, right down to the gold leaf “ER II” (which begs a question or two about divine sovereignty). As virtue gains the upper hand over Venusian vice, so the arch crumbles and rots to nothing, leaving only a void of drabness and decay. It’s a most ingenious paradox.

Albery’s rejection of Wagner’s central tenet – that fleshly delights are the trappings of Hell, and only purity and virtue can save us – leads him take the boldest of production decisions: he directs the entire opera against its plot. This makes for an intriguing evening of narrative risk-taking; and if some of his ideas recall Stephen Daldry’s work on J. B. Priestley’s “An Inspector Calls”, not least his decision to close the opera on a note of hope for the children of tomorrow, his daring approach goes a long way towards saving a broken-backed opera from itself. 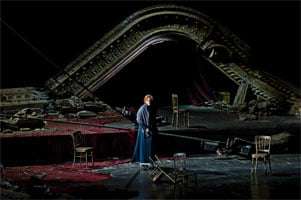 To modern ears the problem with “Tannhäuser” lies in Act Two, where the dramatic motivation for our hero’s ostracisation is highly questionable. It is founded on the hypocrisy, wholly unchallenged, of fallible men who sit in judgement over one of their number and casually consign him to a hell of their own making. We can smell Wagner’s own double-standards here; moreover, as we now know, the high minds who ruled the 19th-century moral roost frequently kept a nasty Venusberg of their own hidden behind closed doors.

Albery’s Venusberg, on the other hand, is a place I wouldn’t mind dropping anchor. Lithe, attractive dancers writhe and couple in a way that seems to have a spiritual purity all its own. Although Jasmin Vardimon’s athletic choreography runs out of steam after a brilliant start, it is still a joyful experience – less an orgy than a celebration of life – and it lifts the spirits. Venus herself, although under-characterised by Michaela Schuster and somewhat blandly sung, is plausibly good-natured, more Tannhäuser’s mentor than his bawd. Contrast this colourful bacchanal with the machetes and Kalashnikovs wielded by God’s soldiers in Act Two, or with the joyless trudge of the miserable Pilgrims in Act Three, and the production’s message is unmistakable. 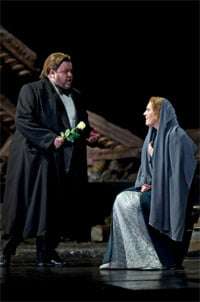 Albery’s Achilles-heel is his overly static direction. Planning meetings with his splendid design team of Michael Levine (sets) and David Finn (lighting) may well have been rich experiences, but although creativity is not lacking, good stagecraft is. Maybe the limited mobility of Johan Botha, a colossus of a Tannhäuser, led Albery to eschew the opera’s possibilities for dynamic action. Perhaps he reasoned that too much stage-energy amongst secondary characters would undercut a hero who is constantly reaching for a chair (“Nimmer kann ich rastend stehn” – I can never be still, he fibs in Act One). But a failure of imagination also blights the ‘filler’ activities during Wagner’s orchestral passages, where the director resorts to the ritualised removing of coats and a v-e-r-y gradual arrival of the chorus in Act Two. Such dramatic poverty is as surprising as it is disappointing in the context of an otherwise carefully conceived production.

If the evening belongs to anyone, it is to Semyon Bychkov. He conducts Wagner’s massive score with such sweet blend and momentum that it could be chamber music, yet the music’s majesty blazes through in every phrase. Each section of the orchestra (with a particular nod to the brass) shines for him in a balance that is well nigh ideal. Tempos, too, are well chosen, faintly on the speedy side but only occasionally feeling rushed. Bychkov is well served by the members of an enhanced Royal Opera Chorus, its singers relishing every moment of a score that must be a chorister’s delight. 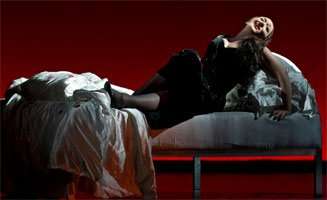 There are no seriously weak vocal performances (although it might have been wiser to engage a soprano rather than a treble as the Shepherd Boy). Eva-Maria Westbroek is not to blame if her virtuous Elisabeth out-dulls even Don José’s Michaëla in the pallid stakes; that is Tim Albery’s intention, after all. Westbroek sings her part with great conviction and as much beauty of tone as the writing allows.

Johan Botha sustains Heldentenor magnificence for the first couple of hours; but it’s a tough old sing, and by the second interval he is dipping into the reserve tank, while in Act Three he’s running on empty. Botha is musically trumped and dramatically trounced by the Wolfram of Christian Gerhaher, a subtle, compassionate presence whose sincerity and vocal eloquence transcends a production that reduces his role to that of an unsympathetic do-gooder. If Gerhaher has been in a battle with the director, he’s won it hands down.