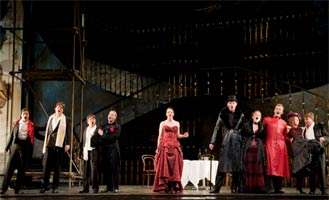 The Royal Opera’s Jette Parker Young Artists Programme is sponsored by Oak Foundation, an international organisation founded by Jette and Alan Parker in Switzerland in 1998 to promote all manner of non-profit-making good causes including the environment, human rights and social integration. The Young Artists Programme was instigated in 2001 to further the musical development of professional singers, conductors, directors and répétiteurs. They spend two years at the Royal Opera House as full-salaried members of the company, receive coaching in all aspects of opera production and are cast in small roles and cover larger roles in the Royal Opera repertoire. The Summer Performance is an end-of-season staging to showcase the Young Artists’ work. This year’s concert, a matinee, was entitled Veneziana. The first half was devoted to scenes from Venetian operas by Rossini. The second half was labelled The Spirit of Venice with excerpts from operas by Donizetti, Britten and Offenbach. 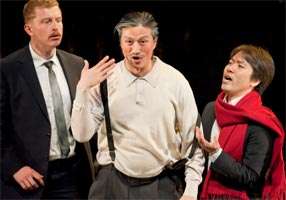 The performance opened with what purported to be a joke about opera and the technicians backstage. Perhaps it was to get us in a comic mood, although the first scene did not come off very well. Il signor Bruschino is a rarely-performed, one-act farce based around mistaken identity but here it was no laughing matter with too much mugging in the acting department, although the singing of Ji Hyun Kim, Dawid Kimberg and ZhengZhong Zhou was reasonable enough. Bianca e Falliero is even more a scarce opera, which appears never to have been performed professionally in the UK. It is based on Arnault’s play Les Vénitiens, about two senators who hope to resolve their differences if one of them marries the other’s daughter. However, as usual in opera, the daughter Bianca is in love with someone else, namely Falliero, a Venetian general. Anna Devin as Bianca and Kai Rüütel as Falliero (it’s a trouser role) made a sweet-sounding pair of lovers, with Madeleine Pierard as Bianca’s nurse Costanza contributing good work in a trio of well-balanced voices. Matters improved even more for the Otello extract, with Pierard as Desdemona and Steven Ebel as Otello. For some reason Rossini set his version of Shakespeare’s play in Venice rather than Cyprus and Iago is not among the main players. The young performers seemed better suited to this meatier piece, showing it to be something they could really get their teeth into. Ebel was a powerful presence in the title role while Pierard displayed her vocal technique to full and impressive effect. Kai Rüütel as Emilia, Ji Hyun Kim as Rodrigo and Daniel Grice as Elmiro gave fine support. The ROH Orchestra under Paul Wynne Griffiths played well and brought the first half to a splendidly dramatic close.

Was The Spirit of Venice really evoked in the second part of the presentation or was that just a useful peg on which to hang three pieces set in Venice? In the event it was the better half in which the artists could really show their mettle. The scenes from Donizetti’s Lucrezia Borgia come to a dramatic conclusion with a confrontation between her, husband number four, Duke Alfonso, and Gennaro, the bastard son of Borgia, who was drawn to her without knowing that she is his mother. However, he recognises her as the celebrated murderess and defaces her family crest. When Alfonso administers poison to the guilty Gennaro, Lucrezia offers him an antidote. The scene depicted showed Lucrezia and Alfonso at loggerheads over how Gennaro should die. Remember, you are my fourth husband, she reminds the Duke. This scene was executed superbly well. As Lucrezia, Elisabeth Meister had a thrilling, full-throated delivery of tingle-factor excitement; a glorious voice. The Alfonso of Lukas Jacobski was full of brooding menace, a figure of palpable evil. He could well be a terrific Sparafucile, the assassin in Verdi’s Rigoletto. Like Meister, Jacobski is a fine actor as well as possessing a marvellous voice. They drew sparks off each other in stage and musical chemistry. By comparison the Death in Venice excerpt seemed a little ascetic. The austerity of Britten’s writing contrasts with the thoughts expressed by the emotionally buttoned-up Aschenbach who is obsessed by the young boy Tadzio he sees on the beach in cholera-infested Venice, although Steven Ebel brought real sympathy to the role and was well-supported by the chorus ensemble. Geoffrey Paterson conducted this extract, which on the whole worked up to a point. Finally everybody had a ball in Offenbach’s Les Contes d’Hoffmann, a superbly rousing finale to an enjoyable afternoon hosted by some great singers in the future.