Verdi
Otello – Opera in four Acts to a libretto by Arrigo Boito after William Shakespeare’s Othello [sung in Italian, with English surtitles] 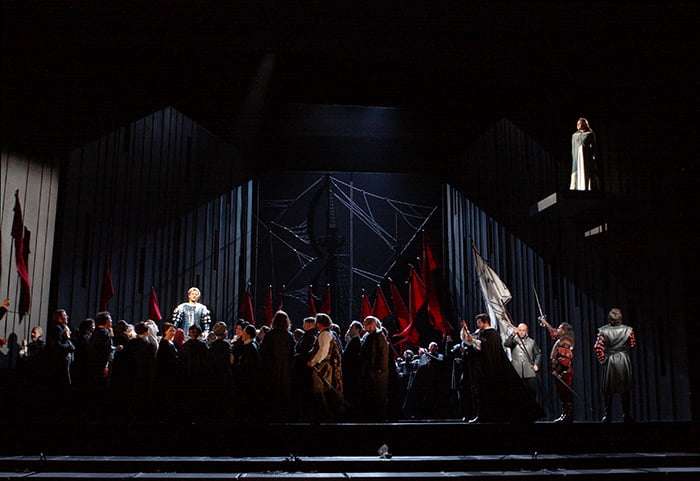 Jonas Kaufmann has at last taken up Verdi’s most challenging tenor role, Otello. Kaufmann’s voice isn’t obviously Italianate, but in Puccini and other Verdi parts his focus and ability to get inside a character have won through. With the previous generation of Otellos, we have come to expect a prodigious, almost mythic leader of men who is rendered a husk by Iago, and Kaufmann doesn’t aim so much at the former. He is a master of Wagner Heldentenor, but his “Esultate!” – a gift of an entry for a show-off tenor with the necessary power – was decisive rather than overwhelming us with southern brilliance, reminding of the fragility of Otello’s authority.

With so much expectation heaped upon him, Kaufmann’s signature transition from his seductive baritone range ever-upwards initially sounded stretched, and for a singer noted for acting with his voice, he was more at one level in Otello’s big, high music than he was in the quieter, loving, desperate and introspective music where the Kaufmann magic worked best – the Act One love duet, Otello’s savage disintegration before the Venetian emissaries in Act Three and the tragic denouement will have sent his fans home well pleased. 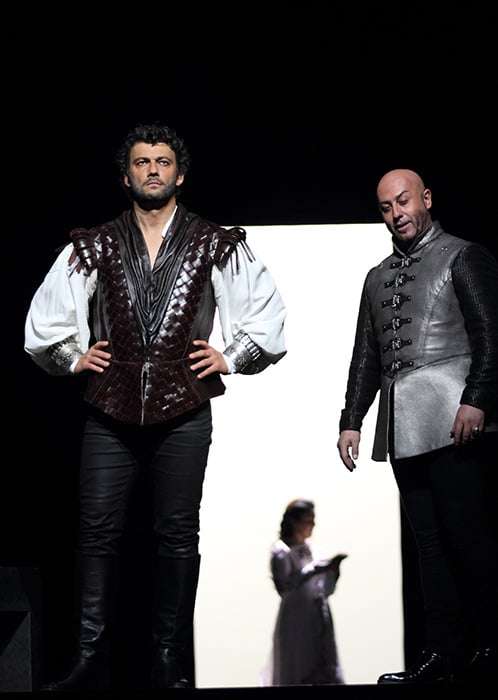 Interestingly, Kaufmann’s lower notes were fuller than some of Marco Vratogna’s, and Vratogna’s baritone had more wheedling insinuation than distilled blackness. He was very effective in all the minutiae of Iago tipping Otello over the edge, but I never felt in the grip of a black hole of nihilism, there only to suck the life out of the man he hates so completely. He is wicked, certainly, but not the implacable Doomsday machine of his ‘Credo’, cleanly sung but unlikely to shiver moral timbers. Maria Agresta showed from the start the scope of Desdemona’s love and purity, floating a beautiful legato in the love-duet and capping a subtly terrified ‘Willow Song’ with an unbelievably tragic ‘Ave Maria’. Frédéric Antoun’s Cassio was elegantly sung and acted, and In Sung Kim’s brief appearance as Lodovico was impressive.

Boito reduced Shakespeare’s play to about a quarter of its length to concentrate on its core theme. Perversely, Keith Warner’s new production re-inflates it into something imposing but inert. His direction of the singers is clear enough and he makes much of isolating figures on Boris Kudlička’s stylised, semi-realist set, which makes many a big gesture with thundering obviousness – our first sight of Desdemona is on a high balcony like a statue of the Madonna, a colossal statue of the Lion of Venice is trundled across the stage in Act Three, then reappears, smashed up, in Act Four. There is much moving around of tall screens into endless configurations, there are neon lights and there is significant graffiti scrawled on a wall. The designs, vaguely Moorish matched by vaguely Renaissance costumes, are efficient and forgettable, commenting on the drama without adding anything to it. Iago’s brandishing two face masks, one white, the other black, at the very start – another thumpingly obvious gesture – has more to do with the clash of good and evil than with the colour of the Moor’s skin (Kaufmann is not required to ‘black up’).

The production also makes the plot appear more episodic than it is, which is precisely what Verdi’s music is not – Otello is his most mobile, through-composed work, with a Wagnerian use of leitmotif and some notably Wagner-style scoring. From the storm music onwards, it was clear how fully Antonio Pappano understands this. He may have drowned Kaufmann in some of the more hectic moments, but his and the ROH Orchestra’s grip on the score’s tragic momentum, on the erosion of Otello’s personality and on the acceleration in Desdemona’s baffled terror was painfully true. All the best things emanated from the pit.